A diagnosis of ASD includes specification of any co-occurrence with language impairment and/or cognitive disabilities (APA, 2013). Regarding language impairment, studies on verbal children with autism have reported that approximately 50% manifest significant structural language impairment (ALI), while the rest display normal abilities (ALN) (e.g. Leyfer et al., 2008). Regarding cognitive disabilities, current large-scale studies have found that the mean rate in children with ASD is roughly 30% (CDC, 2014). However, few studies have explicitly explored the possible combinations of language (dis)ability and cognitive (dis)ability (Kjelgaard & Tager-Flusberg, 2001; Rapin et al., 2009; Joseph & Tager-Flusberg, 2002). There are two potential methodological stumbling blocks in this enterprise. One concerns how language is tested: language abilities have typically been assessed via receptive vocabulary tasks, which probably overestimate verbal abilities in this population (Mottron, 2004). The other concerns the evaluation of cognitive abilities in children with ASD, which have usually been reported as Full Scale IQ scores (FSIQ). However, a large body of literature has demonstrated that perception-based nonverbal tasks, Raven’s Progressive Matrices (RPM) and the WISC-IV Perceptual Reasoning Index, better estimate cognitive level of children with ASD in comparison to FSIQ and other Wechsler indices (Courchesne et al., 2015; Mayes & Calhoun, 2008; Nader et al., 2016).

The aim of the present study was to explore the existence, nature and relative frequency of the profiles obtained by crossing both structural language and nonverbal abilities in children with ASD using more controlled evaluation of both of these properties.

Forty verbal children with ASD (30 analyzed), aged 6-12 years (M=8.79, SD=18.76), were evaluated on formal language abilities via standardized language tasks and tasks targeting specific aspects of morphosyntax and phonology and on cognitive abilities via both RPM and WISC-IV/WPPSI-IV. The only inclusionary criterion was ability to produce utterances of at least three words, while no exclusionary criterion was applied for nonverbal abilities.

Results showed that both RPM and Wechsler nonverbal indices were strongly correlated with most structural language measures (Table 1). All four possible profiles consistently emerged, with both nonverbal measures: two “homogenous” profiles (ALN with normal NVIQ and ALI with low NVIQ) and two “discrepant” profiles (ALN with low NVIQ and ALI with normal NVIQ) (Fig 1), although their relative frequency was not equivalent. This was particularly striking given that, although no group differences were found between RPM and Wechsler indices (p=.742), some children showed a difference of 50 percentile points or more in favor of Wechsler scales (contra Nader et al., 2016).

Our study provides evidence for the existence of all four structural language/nonverbal profiles in children with ASD. The relative infrequency of low NVIQ profiles among these verbal children, and especially the ALN/low NVIQ profile, may reflect population characteristics, although these children are typically excluded from studies on language in ASD. Understanding structural language/nonverbal ability profiles (and therefore appropriate treatment) can only be achieved through wide investigation across the entire spectrum, and thus not restricted to high-functioning children. 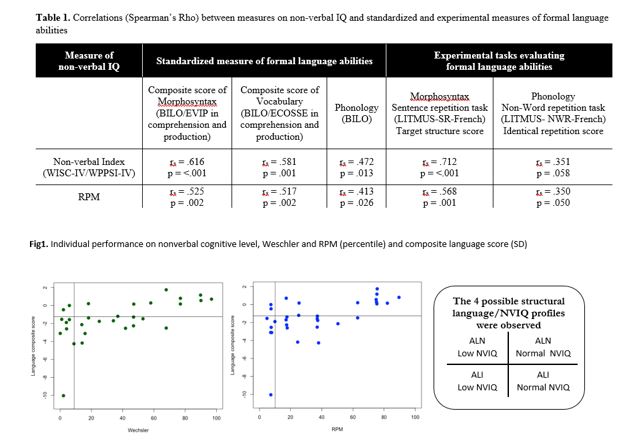