Poster Presentation
Hall Grote Zaal (de Doelen ICC Rotterdam)
A. Bochynska, V. Vulchanov and M. Vulchanova, Norwegian University of Science and Technology, NTNU Trondheim, Trondheim, Norway
Background: The cognitive and language profiles of individuals with Autism Spectrum Disorders (ASD) display both deficient and enhanced abilities within particular domains (Tager-Flusberg, Joseph & Folstein, 2001; Vulchanova, Talcott, & Vulchanov, 2014). Peaks can be observed in the areas of e.g. visual discrimination, Block Design and vocabulary size, whereas troughs are found in communication, pragmatics or egocentric transformations. Here we are interested in the peaks and troughs within the spatial domain. Even though spatial cognition has been widely studied in ASD (e.g. Caron et al, 2004; Edgin & Pennington, 2005; Shah & Frith, 1993; see Muth, Honekopp, & Falter, 2014 for meta-analysis on visuospatial skills), very little attention has been given to spatial language, i.e. descriptions of spatial relations between objects. Since the use of spatial language is based upon both linguistic and perceptual representations, it is particularly interesting in the context of autism and uneven cognitive profiles, and can provide new insights into the disorder characteristics as well as the interplay between language and cognition.

Objectives: The main aim of the current study was to investigate the use of spatial language and identify strengths and weaknesses of spatial verbal abilities in high functioning individuals with autism.

Results: In the Spatial Verbal Memory task, HFA individuals recalled significantly less spatial content from the egocentric, but not allocentric story, compared to TD group. In the Spatial Naming Test, HFA group differed significantly from the TD group in the production of proximity terms (by more frequently omitting the proximity terms, e.g. “to the left” instead of “far to the left”, giving an alternative term, e.g. “first” instead of “nearest”, or making a perspective error, e.g. “far in the front” instead of “far to the left”) and source paths terms (by omitting source, e.g. “down” instead of “down off” or by semantic violations, e.g. “out of” instead of “away from”). Finally, in the Spatial Perspective Taking task HFA individuals showed longer response latencies in all, except the intrinsic frame of reference condition. 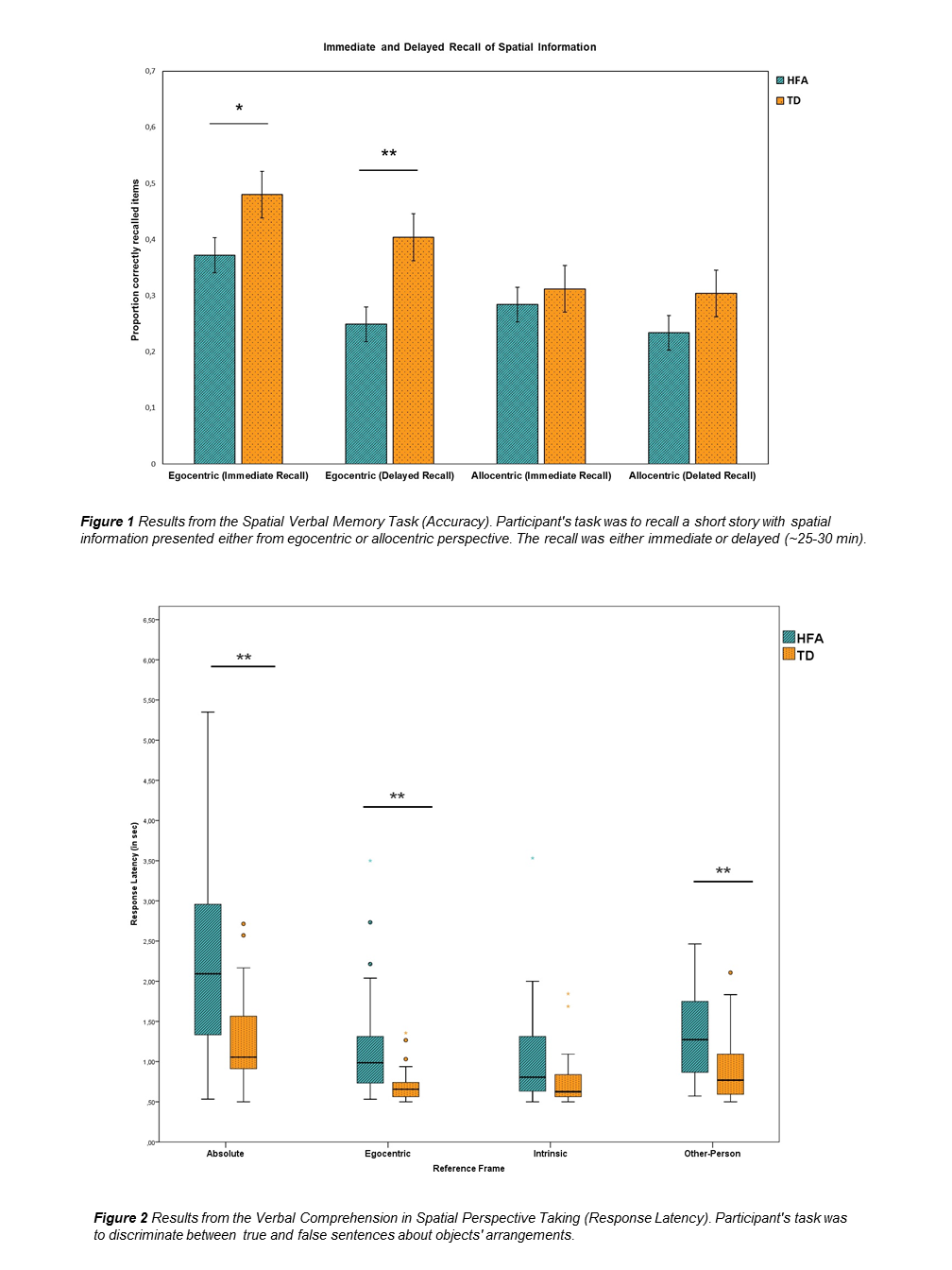