Poster Presentation
Hall Grote Zaal (de Doelen ICC Rotterdam)
E. Hilvert1, D. Davidson2 and I. Misiunaite3, (1)Loyola University, Chicago, IL, (2)Psychology, Loyola University Chicago, Chicago, IL, (3)Loyola University Chicago, Chicago, IL
Background: With an increase in the prevalence of technology, effective writing is not only critical for academic success, but it is also essential for obtaining a high-skill, high-wage job and maintaining daily social interactions. Unfortunately, it is estimated that writing may be one of the most significant academic problems for children with Autism Spectrum Disorders (ASD), with as many as 60% of children having a learning disability in writing (Mayes & Calhoun, 2006). Despite evidence from standardized assessments that writing is generally challenging for children with ASD, little is known about how children with ASD write in different genres. In neurotypical (NT) development, children begin to make important inter-genre distinctions around the age of 9. Typically, children master genre structure earlier in narrative writing compared to expository writing, but use more complex syntax and vocabulary earlier in expository essays (Berman, 2008). More research is needed to understand whether children with ASD are also developing these important distinctions between text genres. Additionally, the mechanisms that influence writing development in children with ASD are still unclear.

Objectives: The objectives of this study were (1) to comprehensively characterize the cross-genre (i.e., narrative, expository) writing development of children with ASD; and (2) to better understand how heterogeneity in handwriting, language ability, and cognitive processing contribute to the writing ability of children with ASD.

Methods: Eighteen children with ASD (Mage= 11;02) participated in the present study. All children had an IQ > 70 and were native English speakers (see Table 1). Children completed two writing tasks on the computer: one personal narrative and one expository essay. Writing performance was assessed in terms of productivity, lexical diversity, syntactic complexity, use of evaluative devices (i.e., hallmark feature of narratives, including character’s internal states, hedges, intensifiers), and genre structure. Measures of handwriting, language, theory of mind (ToM), and executive functioning were also administered.

Results: We found that children with ASD wrote expository essays that were more syntactically complex in terms of the frequency of noun phrases compared to their personal narratives. However, there was also a trend towards children with ASD using better structure and more evaluative devices when writing their personal narratives, but writing longer expository essays. No other differences between the text genres were found (see Table 2). After controlling for variation in non-verbal IQ, we found that ToM ability was related to syntactic and semantic complexity across text genres. Additionally, greater executive functioning ability was related to the use of more complex syntax and better text structure. Surprisingly, chronological age, language ability, and handwriting fluency were not related to writing performance in either genre.

Conclusions: These findings provide evidence that children with ASD make some distinctions in text style when writing in different genres. Additionally, we found that ToM and executive functioning were significant mechanisms for various aspects of writing development in children with ASD. These results have important implications for the development of effective writing curriculum and interventions for children with ASD. 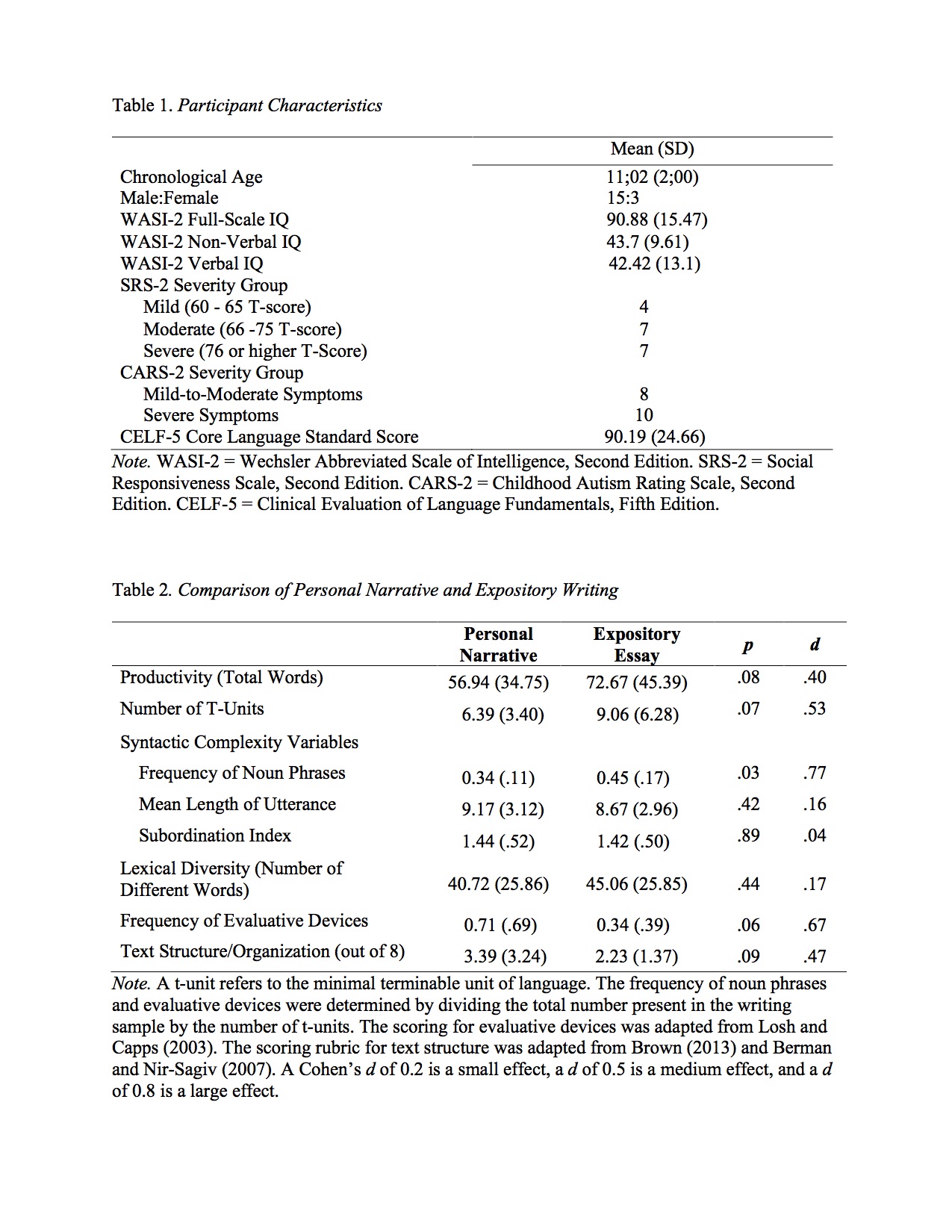