Objectives: The present study compares the types of comments and questions adults with ASD and typically developing controls (TDC) use to actively manage the information provided by interlocutors, while playing a listening role, in a goal-oriented dyadic referential communication paradigm.

Methods: Adults with ASD (n=12) and age-, gender-, and IQ-matched controls with typical development (TDC; n=13) completed a collaborative, dyadic referential communication task designed to elicit spontaneous back-and-forth conversation in a controlled setting. Each participant viewed a computer touchscreen displaying a blank 2x4 grid, as well as eight abstract figures scattered throughout the screen. A confederate sat opposite the participant, viewing the same eight figures in a particular arrangement within the 2x4 grid. Participant-confederate pairs were tasked with communicating so that the participant (primarily in a listening role) could move and arrange his or her figures to match the arrangement on the confederate’s (primarily in a speaking role) screen. Dyads collaborated to arrange a single set of eight figures into 5 immediately consecutive, unique target arrangements (trials). Speech was transcribed, and participants’ utterances were classified as managing discourse (DM), requesting clarification (RC), a non-DM non-request (NR), or as serving a combination of these. Requests for clarification were further subcategorized into 6 mutually exclusive types. These ranged from highly informative, such as requesting confirmation of the identity of the figure currently under discussion, using novel descriptors (confirmation of new, or CN, e.g., “The one that’s like a barbell?”); to extremely vague, such as open-ended requests for elaboration (E, e.g., “Say more?”).

Results: Listeners in both groups spoke more during the first (p<.01) than during subsequent trials. Given that minimal amounts of each type of listener utterances occurred after the first trial, further analyses focus only on the first trial. There were main effects of diagnosis (p<.005) and utterance type (p<.001), and a marginal interaction effect between the two (p=.057), driven by more non-requests (p=.036) and discourse management utterances (p=.024) by the ASD than TDC group. Non-request and discourse management frequency correlated directly with ADOS calibrated severity score (CSS; r=.44, r=.60, respectively). Listeners in both groups varied the types of requests for clarification they produced (p<.01), with TDCs requesting confirmation of novel terms more frequently than participants with ASD (p=.050; see figure), a behavior which correlated inversely with ADOS CSS (r=-.47).

Conclusions: Adult listeners in both groups actively listened by producing comments and questions to manage the information they received from an interlocutor, during a dyadic referential communication task. Use of discourse management and non-request utterances was associated with greater ASD severity, while arguably the most actively informative form of feedback to the speaker—introduction of novel or alternative descriptors—was related with lower ASD symptom severity. 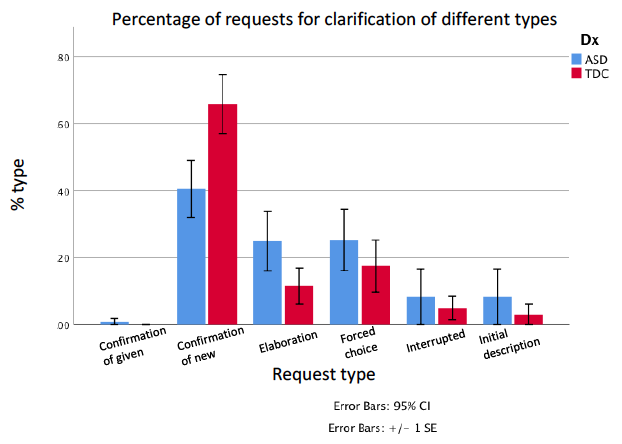