28423
Social Rhythmic Entrainment to Child-Directed Singing: The Role of Predictability

Poster Presentation
Hall Grote Zaal (de Doelen ICC Rotterdam)
M. D. Lense1, L. A. Edwards2 and W. Jones2, (1)Vanderbilt University Medical Center, Nashville, TN, (2)Marcus Autism Center, Children's Healthcare of Atlanta and Emory University School of Medicine, Atlanta, GA
Background: Social communication makes use of predictable, rhythmic behaviors and typically developing (TD) individuals are sensitive to the timing of these behaviors beginning in infancy. In contrast, impairments in the timing of social coordination and reduced sensitivity to rhythmic social behaviors are widely reported in individuals with autism spectrum disorder (ASD). In the current study, we used child-directed singing, a universal form of rhythmic social behavior, to examine how rhythm scaffolds social attention in TD toddlers. Given the critical importance of looking at the eyes of others for understanding social information, we examined how attention to the eyes of a caregiver is modulated by the rhythmic structure of the interaction.

Methods: Sixteen TD toddlers (24 months) watched videos of actresses engaging them with child-directed singing while eye-tracking data were collected. The stimuli videos included natural rhythmic versions of the songs as well as experimentally manipulated, arrhythmic versions. For the rhythmic versions, we used original video recordings of the singing. For the arrhythmic versions, the rhythmic structure of the original videos was disrupted by pseudo-randomly jittering the interval timing between beats of the song. Two levels of jitter were used (moderate: 30%; severe: 50%) to create stimuli that varied in degree of rhythmic predictability. Beats of the singing were determined through vowel onsets and offsets of beat-aligned syllables. The original versions of the singing (coefficient of variation (CV) = 9.5%) were less variable than the 30% jitter versions (CV = 27%), which were less variable than the 50% jitter versions (CV = 43%). We measured whether changes in looking to the eyes of the singer were time-locked to the beats by constructing crosscorrelograms and comparing observed eye-looking with rates of eye-looking expected by chance using permutation testing.

Results: Rhythmic social behaviors in child-directed singing significantly increase attention to the singer’s eyes in TD toddlers. When viewing the original, natural rhythmic condition, toddlers’ looking to the eyes was significantly time-locked to the beat, with eye-looking increasing by 15.8% above mean levels (p<0.05). This time-locked eye-looking was substantially greater for the original versions of the singing than for the experimentally-manipulated arrhythmic versions. There was only a 9.0% increase in eye-looking at the beat for the 30% jittered version (p<0.05) and a non-significant 3.9% increase for the 50% version (see Figure). The overall proportion of time fixating on the eyes was not significantly different across conditions (p=0.72).

Conclusions: These findings show how the rhythmic structure of social communication impacts looking behavior in TD children, increasing TD children’s looking to the eyes, time-locked with their communicative partner. When that rhythmic structure was disrupted, however, TD toddlers were less able to synchronize their looking to the eyes during important moments of social-communicative signaling. For children with ASD, the implication of these results is that children who struggle to perceive the rhythmic structure of social communication may consequently miss important social signals. Results for toddlers with ASD (data collection ongoing) will be discussed. 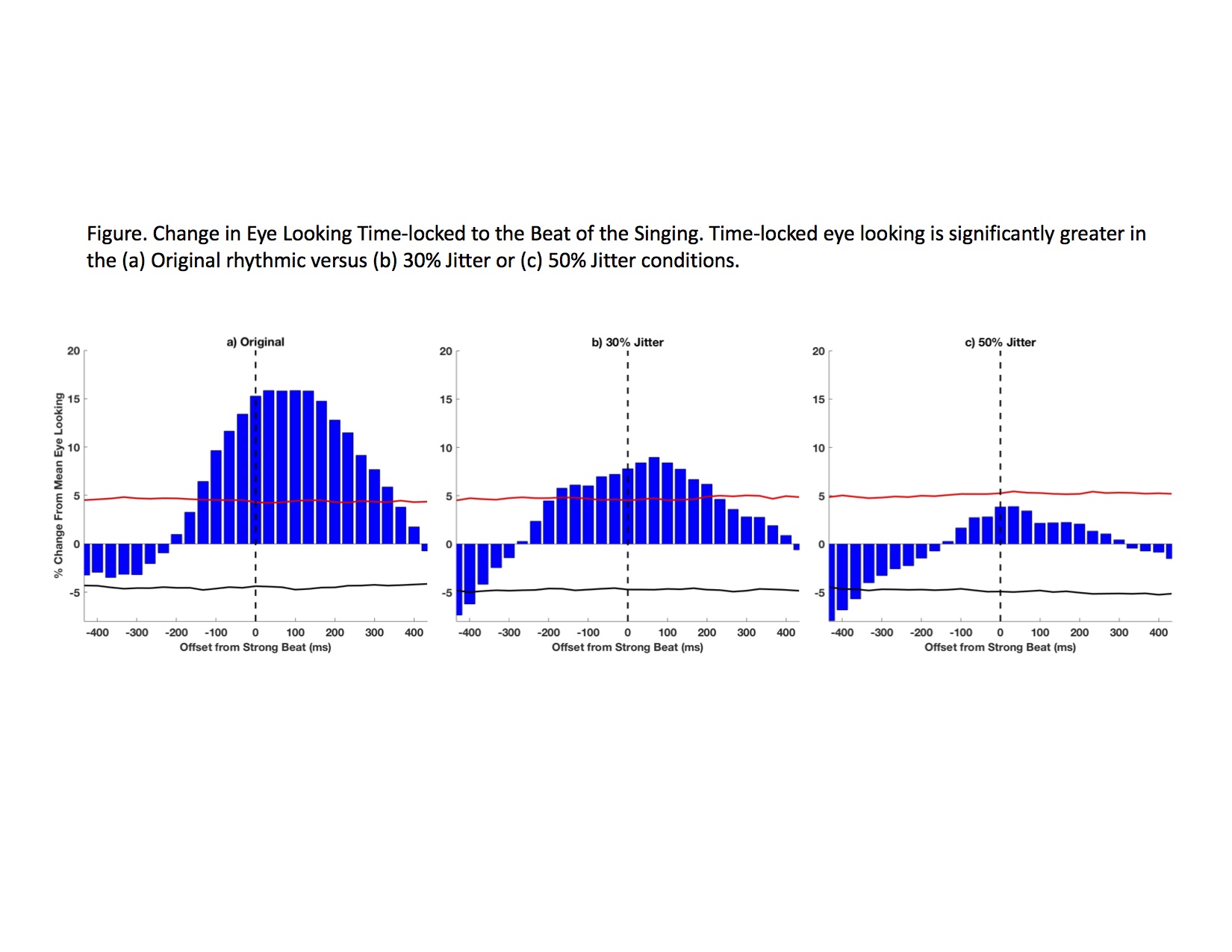