Results suggest, contrary to the robust normative decrease in SA seen in TD populations, ASD adolescents may struggle to separate from their parents with age. This effect was augmented by parent-reported SCQ scores, specifically in the reciprocal social interactions domain, but was only significant for youth with lower scores, or perceived better social interaction skills. Adolescents with confirmed ASD diagnoses but fewer parent-reported social deficits may reflect the phenomenon of social camouflage (Head et al., 2014), in which – typically beginning in adolescence (Lai et al., 2016) – individuals with ASD learn to mask their symptoms and mimic normative behaviors of peers. It may be that doing this exerts a cost on the individual with ASD – specifically in terms of their ability to shift to normative reliance on peers for social support and separate from their parents. This is consistent with findings that youth with ASD and anxiety often exhibit greater parent-reported communication skills (Kerns et al., 2015). Thus, the moderating effect here may represent a mechanism by which this occurs. These findings further highlight the importance of understanding the heterogeneity of phenotypic expressions of SA in adolescents with ASD. 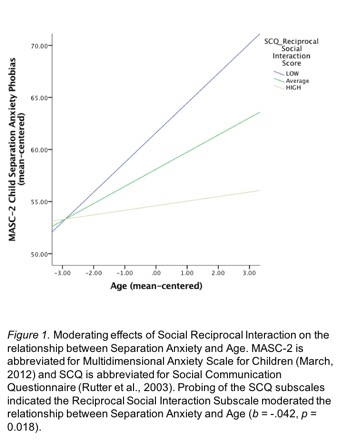