When looking at the world, a child faces an array of almost unlimited visual information, yet at each moment in time she can look at just one thing. Remarkably, typically developing (TD) toddlers, when watching video scenes of social interaction, exhibit patterns of time-varying visual attention that are tightly synchronized with one another. The majority of TD toddlers look at the same stimuli at the same moments in time: they orient towards caregiver faces, affective cues, and gestures in a tightly time-locked fashion that scaffolds their social learning. In autism spectrum disorder (ASD), however, research suggests that these patterns of time-varying visual attention may be disrupted, potentially driving a developmental cascade towards atypical experiences of and interactions with the social world. In comparison, time-varying visual attention in young children with Williams syndrome (WS), a neurodevelopmental genetic disorder with a behavioral phenotype characterized by hypersociability, is relatively unstudied. Quantifying moment-by-moment patterns of visual scanning in these groups situated at the extremes of the spectrum of sociability has the potential to reveal how and when toddlers attribute meaning to signals in their environments and the resulting impact on developing socio-cognition.

To map patterns of time-varying visual attention in toddler cohorts with distinct diagnoses of social impairment (ASD, WS) in order to study how early deviations from typical developmental patterns of attention may scaffold later manifestations of both hypo and hyper-social behavior.

Visual attention in TD controls was synchronized (looking at the same location at the same time) 41.9% of the time (with statistically significant synchronization defined by comparison with results expected by chance, p<0.05). When TD viewing patterns were synchronized, the visual scanning of ASD and WS children differed significantly (p<0.05) from TD controls for 15.03% and 4.52% of viewing time, respectively. Moreover, there was little overlap between the WS and ASD groups in when these moments of divergence occurred (Figure 2), suggesting that WS and ASD children diverge from TD viewing patterns in unique ways. Further study will focus on identifying scene-specific stimuli that are uniquely captivating to viewers with ASD relative to WS and TD viewers. 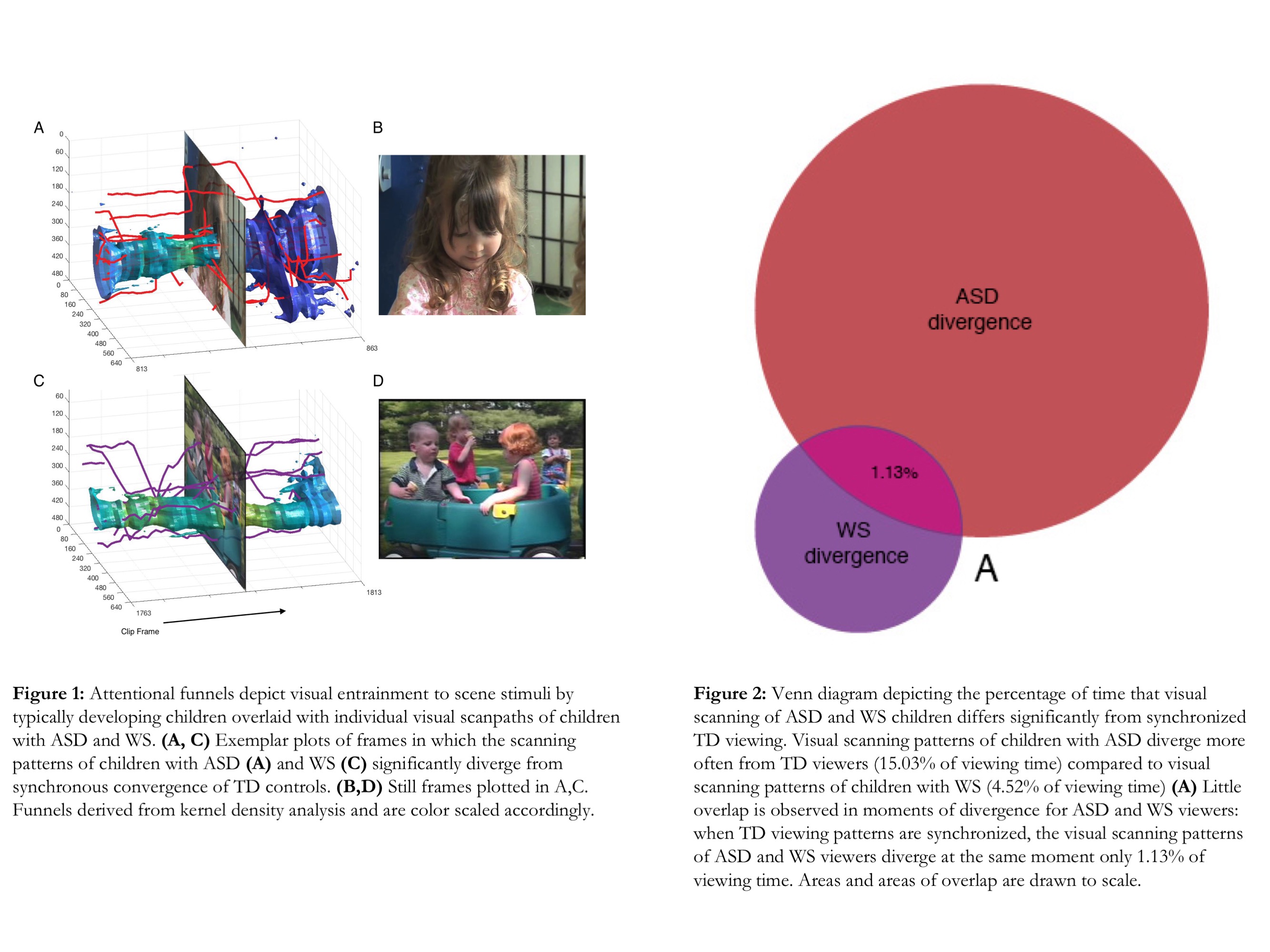