Objectives: Understanding the factors that may contribute to parental stress is crucial in both treatment outcomes and family functioning. We hypothesized that a child’s ToM ability would moderate the association between developmental status and the intensity of parental stress, such that parents of children with ASD and lower ToM skills would report the most intense stress.

Methods: Participants were 101 children (ages 3:0 to 6:11) and their parents. Sixty-one children were typically developing (38% female) and 40 children had a diagnosis of autism spectrum disorder (25% female). Children’s theory of mind was assessed using a battery of tasks comprised of a diverse beliefs task, an unexpected contents false belief task and a changed location false belief task. Intensity of parenting stress was reported by parents on the Parenting Daily Hassles Scale (Crnic & Greenberg, 1990). Children’s verbal abilities were measured using the verbal comprehension and naming vocabulary subtests of the Differential Ability Scales II (DAS-II; Elliot, 2007). 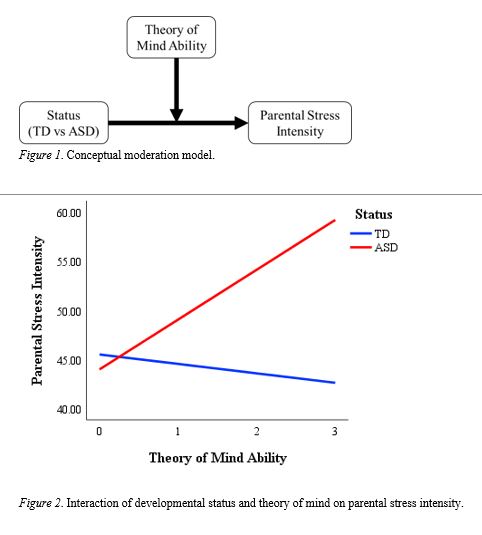