29473
Wugz, Wugs, or Wugzez? Morpheme Generalization in TD Children and Children with ASD

Poster Presentation
Room: 710 (Palais des congres de Montreal)
V. Tecoulesco and L. R. Naigles, Psychological Sciences, University of Connecticut, Storrs, CT
Background: Using the plural and past tense morphemes correctly with novel words (e.g., wugs, blicked) indicates that children have internalized these grammatical patterns of English (Berko, 1958). Typically developing (TD) children demonstrate this knowledge in preschool; however, children with Autism Spectrum Disorder (ASD) appear to show severe delays. In particular, researchers have reported that 4-year-olds with ASD produce plurals with novel nouns less than 25% of the time, and regular past tense with novel verbs less than 10% of the time (Park et al., 2012). The developmental origins of this delay are unclear; for example, whether it is rooted in lexical versus grammatical difficulties.

Objectives: The current study uses a longitudinal design to address two questions: (a) Do older children with ASD show better performance on the ‘Wug’ test? (b) How is their performance on this test predicted by their vocabulary and grammatical talk when they were preschoolers?

Methods: Fifty-eight children between the ages of five and seven years, 29 typically developing (TD) children (M= 5.57 years, SD=.33) and 19 children with ASD (M=6.47 years, SD=.51) participated in the Wug test. Two years previously, they had also been recorded during 30-minute naturalistic mother-child interactions, and their speech was transcribed and coded for noun, verb, plural, and past tense usage. At that time, they were matched on language ability. Currently the TD group outperforms the ASD group on the Test for Auditory Comprehension of Language (TACL) (t(48)=29.274,p<.001).
For the Wug test, the children were shown a picture and told, "This is a wug. Now there are two of them. There are two___." Or for verbs “This man knows how to mot. He is motting. He did it yesterday. Yesterday he ___”. The current study used seven nonwords to elicit regular plural endings (e.g., wug, gutch, and nizz) and six to elicit regular past tense forms (e.g., mot, rick, and gling).

Conclusions: While the ASD group still lagged behind the TD group, their ability to generalize the plural and past tense morphemes to novel nouns and verbs was much higher than reported for preschoolers (Park et al., 2012), indicating that their grammatical development is continuing. Interestingly, while their knowledge of plurals seems linked to their earlier grammatical usage, their knowledge of past tense seems more closely linked to their earlier lexical usage, suggesting that noun and verb morphology may rely on different aspects of knowledge during acquisition. 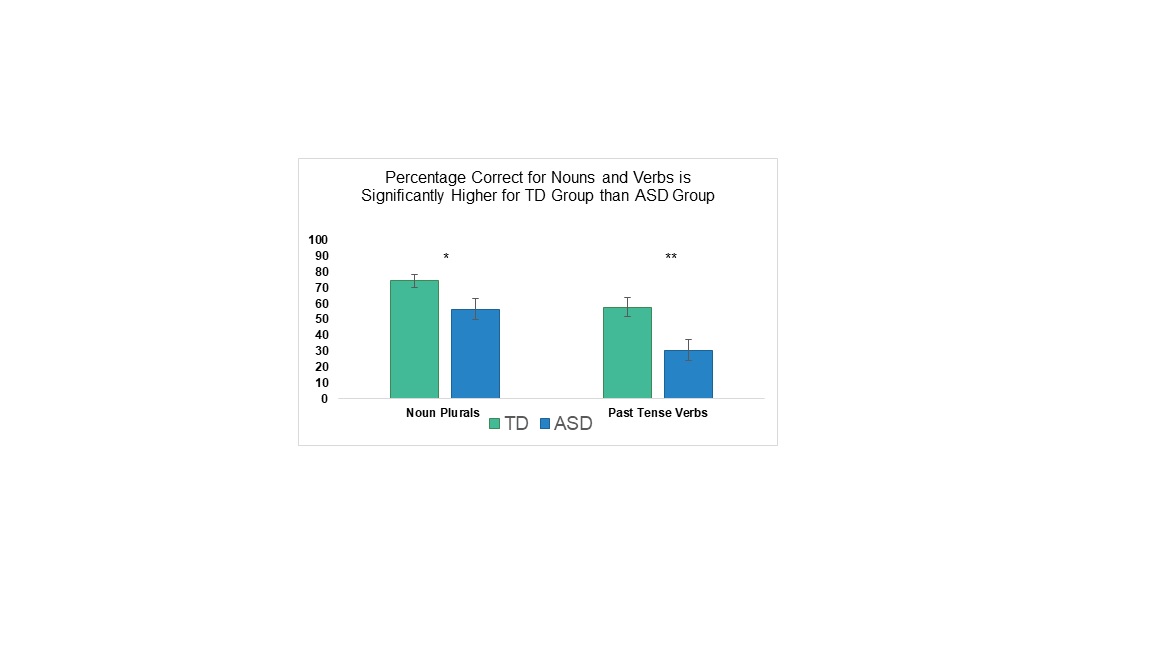