Estimates of intellectual disability in autism vary widely between 11 and 65% and are often not distinguished from language deficits (Lord et al, 2018). There is a higher incidence of intellectual disability in autistic females than males (Rivet & Matson, 2011) although it is unclear if this results from a bias in diagnosis or an underestimation of their abilities during assessments. Since being labelled as intellectually disabled at an early age can have a major impact on adult outcomes, it is important to have reliable assessment tools. Cognitive abilities are typically measured with Wechsler Intelligence Scales (WIS) in both children and adults. However, the reliability of these assessments in autism is questioned (Dawson et al, 2007), notably because some subscales require good language skills that are often impaired in autism. Raven’s Progressive Matrices (RPM), a measure of fluid intelligence, do not require language skills and may therefore reflect a more veridical measure of cognitive abilities in autism.

The objectives of this study are to compare the results of two tests that are commonly used to measure intelligence in autistic and neurotypical children, and to explore whether the discrepancy between measures is influenced by sex.

We compared the cognitive profiles of 41 autistic (17 girls and 24 boys) and 39 neurotypical children (16 girls and 23 boys) matched on chronological age (6-16) using WIS (WISC-III and IV) and RPM. We also ran preliminary analysis comparing results between boys and girls on the subscales of the WIS.

The autistic and neurotypical groups had average WIS IQs of 89 (36th percentile) and 111 (72th percentile) respectively, and RPM scores of 39 (62th percentile) and 41 (70th percentile) respectively. Preliminary ANOVAs showed no difference across genders on RPM and WIS results, and no difference across diagnosis on RPM. However, there was a main effect of diagnosis on the WIS (p<.001, η²=.333). We computed the difference between RPM and WIS percentiles for each participant and used this variable as within-subject factor in an ANOVA with diagnostic group as between-subject factor. We found a main effect of diagnosis on the RPM-WIS difference (p<.001, η²=.239), where the autistic group demonstrated a larger discrepancy (M=26.11) than neurotypicals (M=-1.26). Paired t-test analyses showed that WIS IQs were significantly lower than RPM scores in autistics but not in neurotypicals, suggesting that WIS underestimates intelligence for autistics. This difference cannot be attributed to lower verbal skills in autism, since it was also present in the non-verbal performance index of the WIS. There were no differences in IQ attributable to gender. However, preliminary analysis showed different patterns of strengths and weaknesses on WIS subscales for autistic males and females.

These results show a large discrepancy between WIS and RPM scores in autistic children of both sexes. This may have consequences in clinical practice: in cases when Wechsler scales would diagnose intellectual disability, Raven’s matrices might point to an average intelligence. Taking neurodiversity into account when assessing a clinical population’s intelligence is an important question to consider. 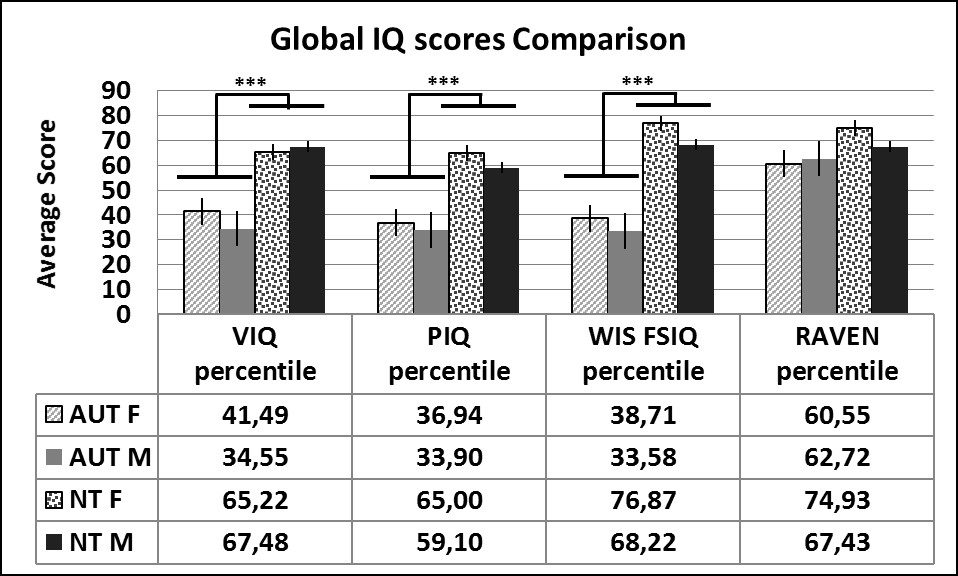