Poster Presentation
Room: 710 (Palais des congres de Montreal)
R. Fusaroli1, E. Weed1, D. A. Fein2 and L. R. Naigles2, (1)Aarhus University, Aarhus, Denmark, (2)Psychological Sciences, University of Connecticut, Storrs, CT
Background: Linguistic alignment is the tendency to re-use an interlocutor’s lexical choices (“mommy, give me the giraffe”, “is that a giraffe?”), syntax (“the giraffe has fallen”, “yes and the elephant has gone to help her”) and semantics (topic continuation). It arguably facilitates the establishment of common ground and rapport, and fosters more successful social interactions (Dale et al 2013). While the ability to align in children with ASD has been investigated, the way in which parents align to and scaffold their children’s linguistic production is unexplored, although it may have important consequences for the social and linguistic development of the children. For instance, parents might mark joint attention, and engagement, as well as give feedback and further elaboration to their child’s utterances.

Objectives: We investigate whether i) parents consistently align their lexical, syntactic and semantic choices to their children’s utterances; and ii) this tendency is modulated by the child’s clinical and cognitive features.

Methods: We analyzed spontaneous speech in 67 parent-child dyads from a longitudinal corpus (6 visits over 2 years), consisting of 30 minutes of play activities. We included 32 children diagnosed with ASD (mean age at recruitment = 32.76 months and 35 linguistically matched TD children (mean age at recruitment = 20.27 months). Alignment was calculated as cosine similarity between successive conversational turns (parent following child). Lexical alignment was based on lemmatized words, syntactic alignment on 2-grams of part-of-speech tags, and semantic alignment on Word2Vec representations of the corpus (Duran et al 2019). We first contrasted parental alignment in actual conversations with that in surrogate pairs formed by a parent and a child from two different conversations and found consistent alignment above baseline. We used Bayesian multilevel zero-and-one-inflated-beta regression models to account in the same model for rate of alignment, level of alignment when aligning, and exact repetitions (the latter controlled for, but not reported here). The models assessed alignment as a function of diagnosis, visit, Vineland Socialization, Mullen Expressive Language (EL) and Visual Reception (VR) at first visit. We controlled for effects of child MLU.

Conclusions: Parental alignment is modulated by the child’s clinical and cognitive features. Alignment is generally higher for TD and generally children with higher cognitive abilities. Crucially, we observe different patterns for rate and level of alignment, which were not previously separated in studies of alignment. Research is needed to further explore their separate implications. 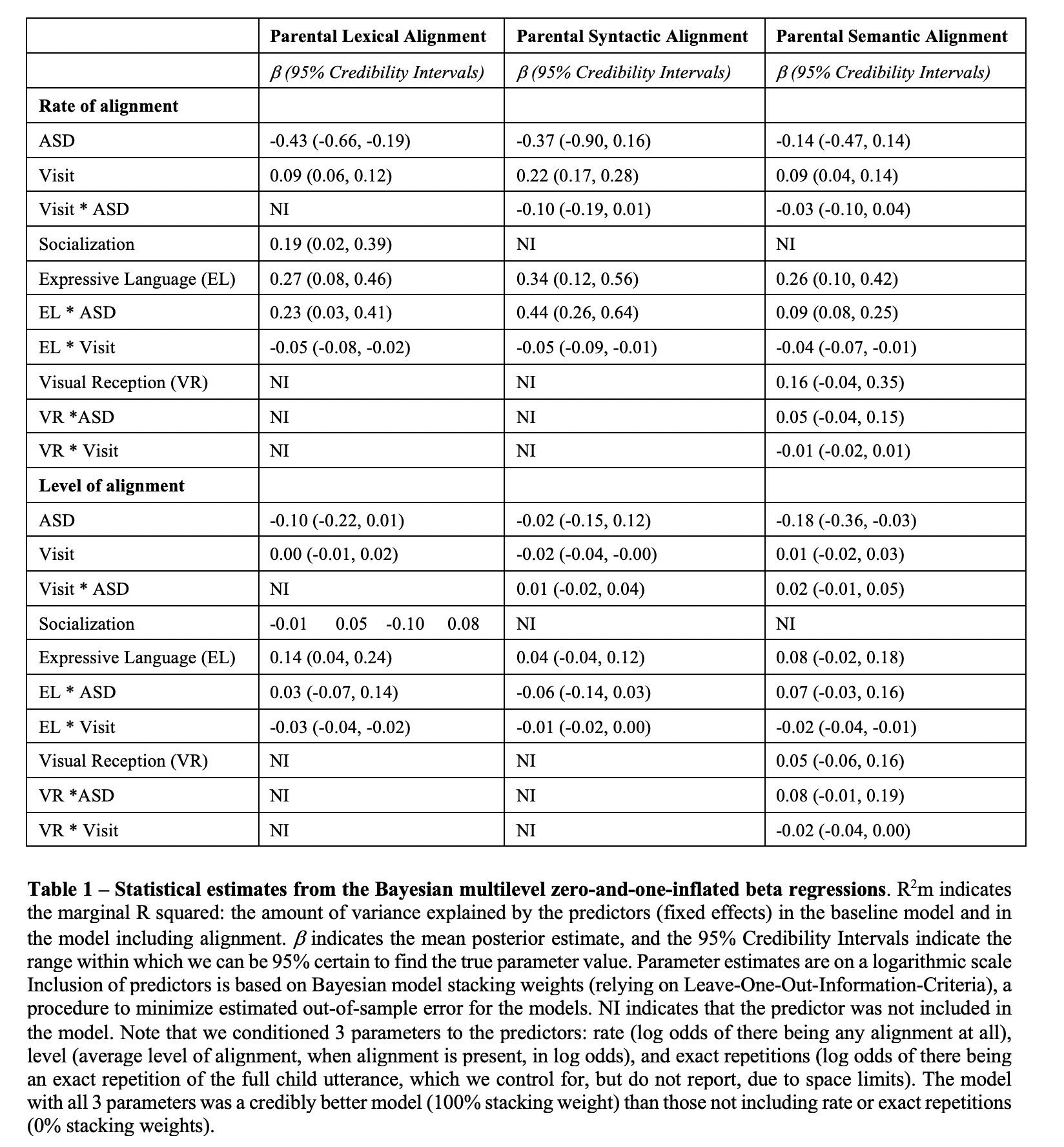