Using Intermodal Preferential Looking (Naigles & Tovar, 2012), we assessed the online processing of aspect markers in a general group of Mandarin-exposed preschool children with ASD, investigating whether they utilize the perfective marker le and the progressive marker zai to distinguish between completed and ongoing events.

Participants included 42 Mandarin-exposed children with ASD, MA=52.07 ± 14.89 months; M(vocabulary)=235.62 ± 212.17 words, and 39 TD children, MA=31.79 ± 1.34 months; M(vocabulary)=695.95 ± 84.11 words. The TD children were recruited to be significantly younger (p<.001) with the goal of matching the ASD group in vocabulary; however, TD vocabularies were significantly larger than ASD (p<.001). Children listened to sentences with the perfective marker le (e.g., ta xi-le wawa ‘she washed the dolly’) or the progressive marker zai (e.g., ta zai-xi wawa ‘she is washing the dolly’) paired with side-by-side completed or ongoing events, only one of which matched the test sentence.

The participants’ looking behaviors while viewing the videos indicated that both groups demonstrated comprehension of the aspect markers. On the percent looking to match measure (Table 1), effects of audio, F(1, 79)= 30.77, p<.001, and trial, F(1, 79)=9.28, p=.003, and a significant interaction between audio and trial, F(1, 79)=6.57, p=.012, emerged during the total test trials relative to the control trials. Follow-up t-tests showed that both groups looked significantly longer to the match during the test relative to control trials for the 2nd half of the test trials with the perfective marker le and for the 1st half of the test trials with the progressive marker zai (all ps<.05). Timecourse data confirmed this looking pattern that hearing the perfective marker le triggered more eye movements to the completed event during the 2nd half of the test trials, whereas hearing the progressive marker zai triggered more eye movements to the ongoing event during the 1st half of those test trials, in both groups of children (Figure 1 illustrates the timecourse data of the ASD group).

Mandarin-exposed preschool children with ASD demonstrated similar sensitivity to aspect markers as younger TD children, even though the expressive vocabulary levels of the ASD group were dramatically delayed. Thus despite their frequent omissions of the aspectual morphemes in language production, comprehension of grammatical aspect may be preserved in the general population of preschool children with ASD across countries. 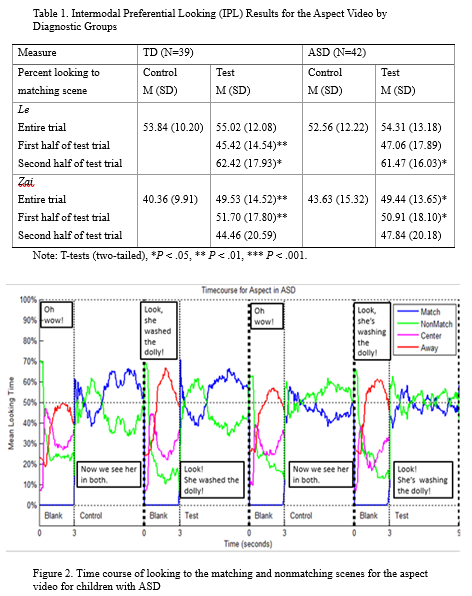