Objectives: To utilize structured conversation probes coded by raters blind to study group and time point to compare change in (a) adherence to the rules for two-way conversations taught during PEERS, and (b) social likeability among participants who were randomly assigned to complete PEERS, a peer-mediated model of PEERS (PMP), or a delayed treatment control (DTC) group.

Methods: Participants were 34 adolescents with ASD (age M = 15.23, SD = 1.18; 82% male) and 16 typically developing (TD) peer mentors (age M = 15.50, SD = 1.27; 44% male). Participants with ASD met criteria for autism/autism spectrum on the ADOS-2 and had an overall or verbal IQ ≥ 70. PEERS was delivered as manualized to the PEERS group. It was delivered identically to participants in PMP, with the exception of the inclusion of TD peer mentors. DTC was assessed at 3 time points over 9 months.

Participants (ASD and TD) completed a videotaped 10-minute structured conversation probe with a novel research assistant pre- and post-intervention. Participants with ASD completed additional probes at 4-month and 1-year follow-ups. It was not possible to collect 1-year probes from DTC participants because they had already started treatment.

Adherence to 16 rules for two-way conversations was coded by trained raters using whole and partial interval recording. Higher scores indicated greater adherence (second rater coded 43%: ICC = .92). To assess social likeability, four novice research assistants watched each video and responded to the statement “What is the likelihood that similar-aged teenagers would enjoy socializing with the participant” using a Likert scale ranging from 1-unlikely to 10-likely. Scores were averaged across raters (ICC = .88).

Conclusions: Findings suggest that adolescents in PMP increased adherence to rules for two-way conversations, and that treatment gains were maintained at 4-month and 1-year follow-ups. Treatment gains in adherence were partially corroborated by gains in social likeability. Findings are consistent with previously reported results from adolescent- and parent-report questionnaires from the same sample that indicated a modest advantage for PMP relative to PEERS (blinded). 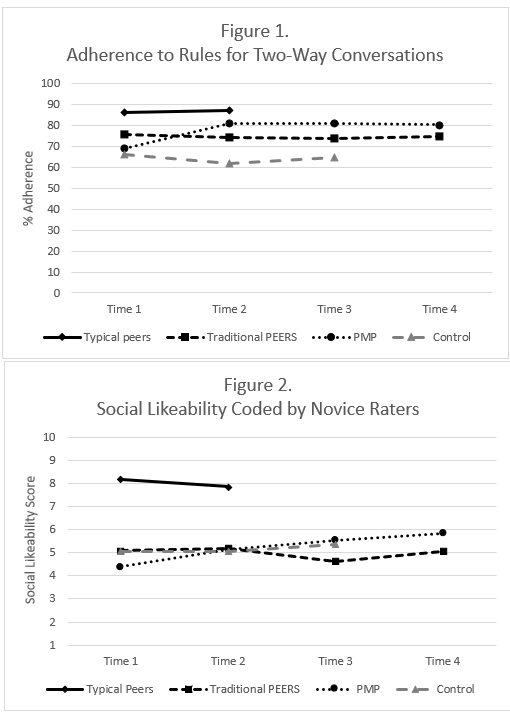