Objectives: Our aim was to determine which of these toddler-specific questions within each DSM-5 symptom domain most clearly differentiate very young children with ASD from those with other disorders or typical development, and which symptoms are unlikely to be manifested at this age.

Methods: Semi-structured interviews with parents attending a diagnostic evaluation for their child were analyzed to determine which questions within each DSM-5 domain best discriminated children who received an ASD diagnosis from those with another diagnosis or no diagnosis. Participants were parents of 284 toddlers between age 12-36 months (M=19.3) who screened positive on a developmental screening questionnaire and received a developmental/diagnostic evaluation. Seventy-eight children were diagnosed with ASD; 117 received a diagnosis of language delay or global developmental delay, and 89 were typically developing. Fisher’s Exact Test was used to determine group differences on each of 45 interview questions. An adjusted alpha value of a=.001 was used to account for multiple comparisons.

Results: Responses to most interview questions were significantly different between the ASD, other diagnosis, and typically developing groups. Table 1 lists the items with the largest effect size. In the social domain (DSM-5 criterion A), questions about initiating joint attention, gaze shifting, and responses to other children most strongly distinguished diagnostic groups. In the Restricted, Repetitive domain (criterion B), questions addressing unusual whole-body movements, distress in response to change in routines, presence of restricted interests, and sensory seeking (vs. hyper- or hypo sensitivity) showed the largest differences. Items that were not different among diagnostic groups included how children respond to their name (though frequency of response to name was significant), immediate and delayed echolalia, and distress to minor changes in the environment. We suggest that many young children do not yet have enough language to be echolalic, and their cognitive development may not be sufficient to notice small changes in the environment.

Conclusions: Focusing on how the DSM-5 ASD symptoms are expressed in toddlers can help to optimize evaluation efficiency and shed light on how the core symptoms appear early in development in children who screen positive for developmental disorders. 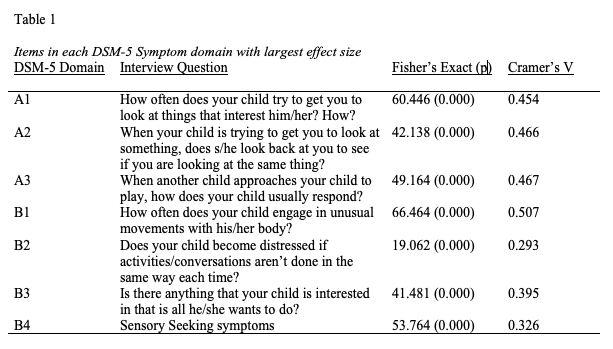