Poster Presentation
Room: 710 (Palais des congres de Montreal)
C. A. Mendez- Rossello and R. E. Oliveras, Behavior & Brain Sciences, Ponce Health Sciences University, Ponce, PR
Background: Children with ASD have been informally observed and have been associated with the preference of English in television programs, movies, and even as a way to learn and communicate; this being assumed by some Speech and Language Pathologists in Puerto Rico (2016).

Objectives: The study titled Language preference and proficiency of sequential bilingual children with Autism Spectrum Disorders (ASD) was conducted with the purpose of investigating bilingualism in families with at least a child with ASD, and the language best dominated and preferred by the child. Also, to understand the nature of the language practices, and their limitations or constraints according to administered surveys.

Methods: The first phase of the method was the administration of instruments, which had an exploratory approach and identified the preferences of language and other types of exposure to language of these children. This was measured with the Survey for Parents, The Survey for Speech and Language Therapists and Pathologists, Special Education Teachers, Psychologists, as well as other Professionals and with the Screening Sheets of Exposure to Language for Parents. The participants or subjects on this stage had to meet the following criteria: (a) ages of 6-12 years old, (b) a documented diagnosis of ASD, (c) Puerto Rican living in Puerto Rico, and (d) being a sequential bilingual (Spanish/ English).

Results: A sample of n=38 completed the first phase of this study. The sample of participants varied between parents of children with ASD and Professionals who give services to children with ASD. The majority of the sample was composed of women (92.1%). The results indicate that (92.1%) of the children with ASD prefer English. Also, it was reported that the frequency of English usage was pretty much(51-75; ¾) reflecting itself as a percentage of 51.7%. Finally, the results detected that the language used to communicate with the minors is Spanish (48.6%). Nevertheless, both languages (English/ Spanish) are used with the same frequency with a ratio of 45.7%.

Conclusions: According to the review of literature and theoretical framework, the English language is preferred by children with ASD. This language facilitates learning and communication; what is affirmed by the Speech and Language Pathologists in Puerto Rico. This may be due to the concreteness of the English language and linked to the metrical organization of speech. English is an easier language to acquire by children with autism since phonological development tends to be easier to attain because in Spanish the word length (number of syllables) tends to be significantly longer. 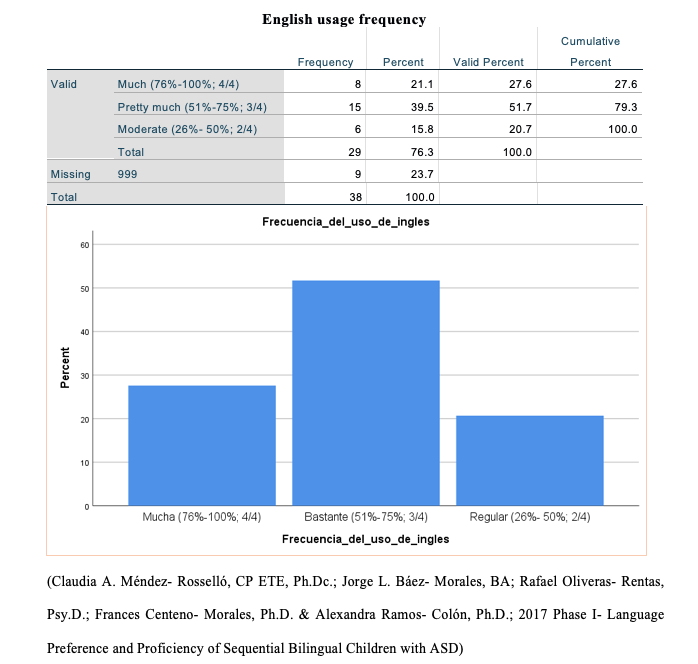