Poster Presentation
Room: 710 (Palais des congres de Montreal)
K. Matsushima and T. Kato, Department of Human Health Science, Graduate School of Medicine and Faculty of Medicine, Kyoto University, Kyoto, Japan
Background: Touch is the primary form of communication in the first year of human life. Tickling is an intriguing tactile perception related to self-other recognition, as it is difficult to tickle oneself but easy to be tickled by others. Infant-mother tickling interaction reportedly promotes the development of social communication in infancy; infants tend to look at their mothers’ faces and tickling hands alternately during pauses before actual tickling. This gaze behavior seems important to anticipate others’ intentions.
Social communication impairment is a core feature of Autism Spectrum Disorders (ASD), and an atypical pattern of eye contact and gaze behavior in ASD is well-established. Based on previous findings, we hypothesized that children with autistic traits would show less visual attention to faces during pauses before actual tickling.

Objectives: The objective of the current study was to investigate the relationship between gaze patterns during tickling interactions and autistic traits. We focused on preschool-aged children to conduct the eye tracking-based methodology.

Methods: The participants were fourteen typically developing children between 42 and 68 months of age (seven boys and seven girls). We utilized Tobii Pro Glasses 2 to obtain eye tracking data during dynamic interactions with a sampling rate of 50 Hz. A child wearing the head unit was seated on a chair facing the examiner. The examiner tickled four different body parts (neck, side, underarm, and chest) for five seconds; each body part was tickled two times consecutively, once without a pause before the actual touch and again with a pause of three to five seconds before the actual touch. Beforehand, the children were told “This is the game. I will tickle you. Tell me whether it is ticklish.” The total duration of fixation on the face area during the pause was calculated using Tobii Pro Lab. A fixation filter with minimum fixation duration of 60 milliseconds was applied. The average of the face fixation ratio (face duration [s] / pause duration[s]) was calculated as an indicator of gaze pattern. The Social Responsiveness Scale – Second Edition (SRS-2), including five treatment subscales (social awareness, social cognition, social communication, social motivation, restricted interests and repetitive behavior), was utilized to assess autistic traits. Preschool teachers were asked to fill out the SRS-2. Pearson’s correlation coefficients were used to measure the strength of linear associations between visual attention and T-scores reported on the SRS-2.

Conclusions: The findings of our study suggest that gaze pattern during tickling may relate to some autistic traits in preschool-aged children. During pauses before actual touch, the children anticipated the examiner’s actions and resulting feelings of ticklishness. Although this study was conducted with typically developing children, autistic traits are distributed along a continuum. Therefore, focusing on response to tickling may be potentially useful to understand social development in children with ASD. 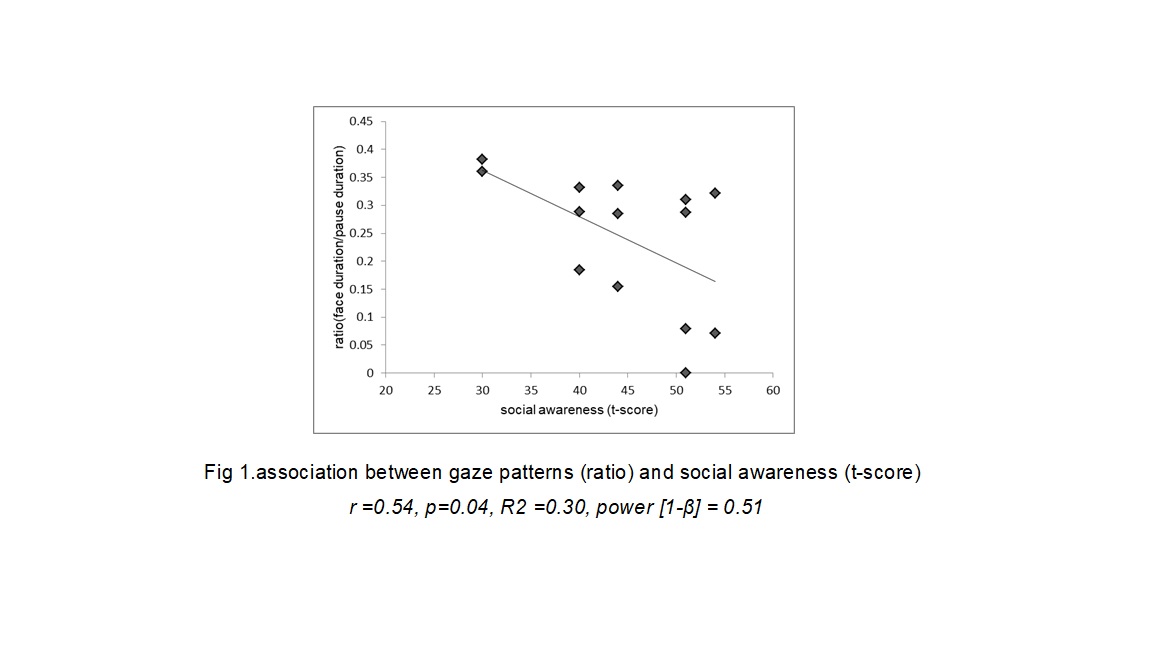