This study aims to explore predictors of change in parental request strategies over time.

Participants were part of a randomized efficacy trial of a parent-mediated social communication intervention (JASPER; Kasari et al., 2015). 86 toddlers with ASD (CA = 24 - 36 months) and their primary caregivers completed a video-taped clean-up task at entry and, 10 weeks later, at exit. Parents were also asked to complete the Infant Toddler Social Emotional Assessment (ITSEA; Briggs-Gowan & Carter, 2000), a measure of children’s maladaptive behavior. Parent’s use of request strategies during the task was coded in 10-second intervals to include 6 types of requests: Unclear command, direct command, indirect command, reprimand, positive incentive and reasoning. Proportions of each request strategy used during the task was calculated for parents at both time points. Change scores between entry and exit were calculated for the three subdomains of ITSEA - internalization, externalization and dysregulation - and the proportion of each request strategy. Paired sample t-tests were conducted to determine that there were no differences between the treatment groups on any of the outcome variables. Separate linear regressions were conducted to predict the 4 most used request strategies: Unclear commands, direct commands, indirect commands and reprimands. Change scores for each ITSEA subdomain were entered as predictors, and the regression model controlled for treatment group assignment.

Children’s internalizing, externalizing and dysregulation, as reported by parents, emerged as a significant predictor of change in parental request strategy use over time. This emphasizes the transactional nature of parent-child interactions, and indicates the need for parent education curriculums that teach parents how to address maladaptive behaviors and optimize communication with their children with ASD. 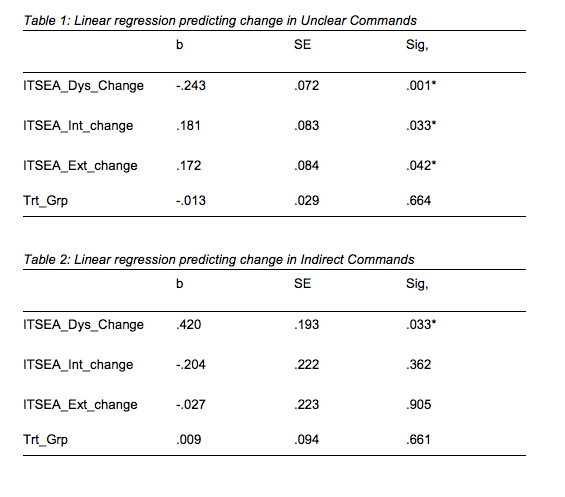