Poster Presentation
Room: 710 (Palais des congres de Montreal)
C. J. Crompton1 and S. Fletcher-Watson2, (1)University of Edinburgh, Edinburgh, United Kingdom of Great Britain and Northern Ireland, (2)University of Edinburgh, Edinburgh, United Kingdom
Background: Social cognition is an umbrella term referring to behaviours thought to be necessary for successful interactions with others. To date, most social cognition research in autism has focused on apparent deficits on traditional laboratory tasks, which in theory underpin difficulties in real-world interactions with others. If social cognition is impaired in autism, interactions between two autistic people should be especially challenging. However, multiple autistic first-person accounts suggest that autistic people find interacting with other autistic people more comfortable, successful and satisfying compared with interacting with neurotypical adults.

In this study, we adapted a cultural learning paradigm used widely in comparative psychology, to explore transmission of information between individuals, contrasting autistic, neurotypical, and mixed neurotypical/autistic pairs.

One possibility is that transmitting information to someone of a different neurotype is more demanding because of cognitive resources being required to, for example, mask autistic behaviours or interpret different social cues. This may result in less computational power to dedicate to the experimental task, reflected in reduced accuracy. Alternatively, or additionally, transmitting information to someone from a different diagnostic group might be harder because a lack of interpersonal affiliation reduces motivation to attend to the other person, or to replicate their actions precisely. This would result in lower feelings of rapport and less engagement in the task.

Objectives: To examine whether performance on cultural transmission tasks varies depending on the diagnostic status of the social partner.

Methods: Using a ‘diffusion chain’ technique - a controlled, experimental form of “telephone” which probes cultural learning between individuals in a group - a researcher told the first participant in each chain a story which they were told to pass on to the next participant. They were then asked to pass it on to the next participant, and so on. The story was divided a priori into 30 specific details, meaning accuracy was scored on a scale from 0-30. Each diffusion chain included eight participants; who were either all autistic, all neurotypical, or alternating autistic and neurotypical. Participant interactions were filmed and participants rated rapport with their partners after the task.

Results: Data collection was completed in November 2018; at the time of submission 64 of 72 participants data have been scored for accuracy. Figure 1 illustrates these preliminary findings from three autistic (n=24), three alternating (n=24), and two neurotypical (n = 16) diffusion chains. Results indicate that accuracy in story details declines more slowly for both all-autistic and all-neurotypical chains. However, alternating chains show a steeper decline and lower final accuracy scores. Planned analyses on the complete dataset will explore the difference scores between pairs in each chain. In addition, we will report data on participant’s perception of rapport, and coded video capturing interactive behaviours between pairs.

Conclusions: Preliminary findings suggest that both autistic and neurotypical people benefit from having an interaction partner with the same diagnostic status, when performing an information transfer task. These findings will be interpreted in light of an emergent autism theory: the Double Empathy Problem. 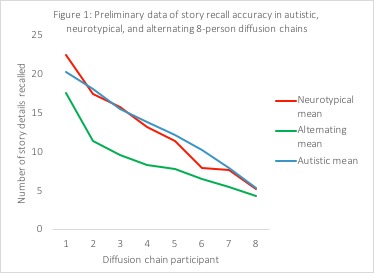