30132
Rhythmic Synchronisation Does Not Come Naturally to Children with Autism

Objectives: Using a custom-made video game, we assessed how likely children with ASD were to spontaneously synchronise their movements with the character in the video game. The children’s movements were tracked using the Kinect Xbox motion capture system, which is free of physically constraining sensors or cables. This novel method enables precise identification of synchronisation deficits and provides support for the use of this game as a potential behavioural intervention in the future.

Methods: Thirty 8- to 12-year-old children (19 ASD:1f-18m, 11 TD: 2f-9m) participated in the study; data collection is ongoing. The ASD and TD groups were matched on chronological age and IQ. In three 90-second repeated trials, children were asked to move their arms in a particular way (see Figure 1) in order to “collect food for the monkey in the video”. They were told that they could do this “as slowly or as fast as [they] like, but that [they] would continue doing the movement until that game level ended”. Simultaneously, the children watched the monkey in the video perform the same move in time to three different rhythms: slow (0.8Hz), medium (1Hz) and fast (1.33Hz). We used three different rhythms in order to examine whether synchronisation is easier with varying speeds and to examine children’s adaptability to new rhythms.

Results: Children’s movement rhythm within each speed block was assessed using a Fourier transform on the z (horizontal plane) coordinate of the two forearm joints. We found that, across all speeds, children’s movement rhythm significantly differed from the rhythm of the stimulus more so in the ASD group than in the TD group (see Figure 2a), indicating poorer synchronisation in the ASD group. To examine children’s adaptability to new rhythms, we also assessed their likelihood of transitioning into a new speed. For this analysis, children were considered as having ‘transitioned’ into a new rhythm if they performed the movement within +/-10% of the stimulus rhythm for 20% and 40% of the block duration. Survival analysis models revealed that regardless of how strictly or liberally a transition event was defined, children in the ASD group were significantly less likely to transition into a new rhythm as compared to TD children (Figure 2b). 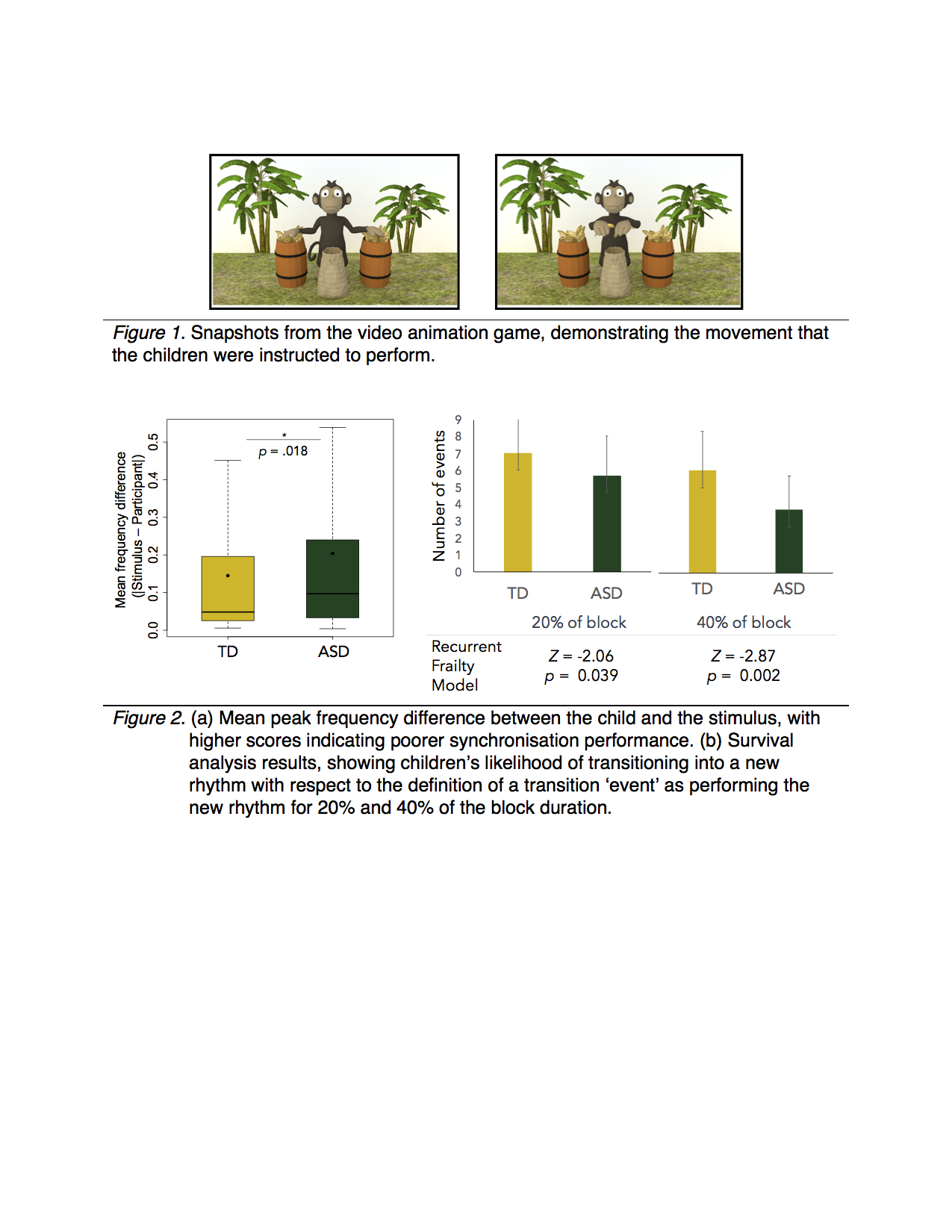