How early signs for autism spectrum disorder (ASD) emerge is currently unknown. The Autism Observation Scale for Infant (AOSI) represents an elegant solution to the prospective observation of the emergence of ASD symptoms in high risk infants. Within this study, we longitudinally assessed infant siblings of children with ASD from 6 to 18 months of age using the AOSI. We followed up the expression of their symptomology using the Autism Diagnostic Observation Schedule (ADOS), collected from 18 months to 5-7 years in the same children. We derived distinctive trajectories of early signs of ASD in infancy, and we observed the conditional probability that those trajectories had on the later trajectories of symptom severity.

The primary goal of the current research was to define, in children at high risk, the relationship between how early signs for ASD emerge and the expression of symptom severity later in life.

The sample was composed of 499 high risk siblings (281 males), of whom 128 received an ASD diagnosis in a blinded assessment at 36 months. We used group-based trajectory models (GBTM) to derive trajectories of early signs for ASD measured at 6, 9, 12, 15 and 18 months of age using the AOSI. Using the same statistical model, we derived symptom severity trajectory groups from the ADOS at 18, 24, 36-42, and 60-84 months. We examined the proportions of children within each trajectory group, and analyzed the conditional probability of switching from a distinctive AOSI trajectory to a later ADOS trajectory.

Our results confirm substantial heterogeneity in the early emergence of ASD symptomatology in children at high risk for ASD. Moreover, we have shown how the emergence of signs of ASD in infancy is highly predictive of the later patterns of symptomatology. These results have strong clinical implications, supporting the need to screen infants at high risk for ASD repeatedly and to monitor closely how early signs of ASD appear, as this can be highly indicative of the clinical course. The AOSI shows good potential as an early assessment of ASD symptoms. 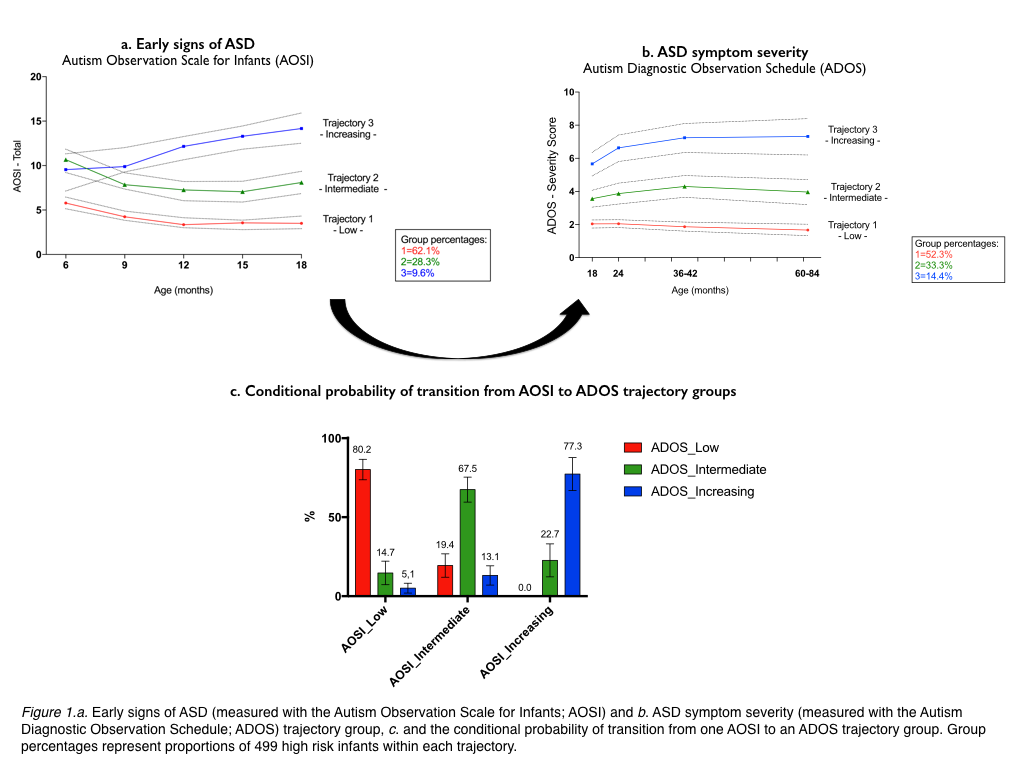