Measurement of treatment response is essential for understanding the efficacy of early interventions for autism spectrum disorder (ASD). Development of measures that capture meaningful outcomes across contexts while maintaining strong psychometric properties has been identified as a priority in the field (Lord et al., 2005; McConachie et al., 2015; Schreibman et al., 2015). The Brief Observation of Social Communication Change (BOSCC; Grzadzinski et al., 2016) is an observational rating scheme of brief play interactions, which was developed to capture short-term change in child social communication skills.

The goal of this study was to adapt the BOSCC to a new context, a snack routine, and evaluate the psychometric properties and validity of the BOSCC in both play and snack routines.

Participants were 50 children (mean=46 months old) and their caregivers who participated in two research studies evaluating the efficacy of a low-dose parent-mediated intervention delivered via telehealth. Caregiver-child interactions of a play routine and a snack routine were filmed in family homes at three time-points (pre- and post-intervention, and a 3-month follow-up). A research-version of the BOSCC (BOSCC-Play) was used to rate play videos, and adaptations were made for application to snack videos (BOSCC-Snack). We evaluated the internal consistency and inter-rater reliability of both BOSCC-Play and BOSCC-Snack. In addition, the relationship between BOSCC-Play and BOSCC-Snack was evaluated concurrently and over time. Last, correlation and hierarchical regression were used to understand how BOSCC-Play and BOSCC-Snack predicted other measures of child skills.

Results show that the psychometric properties of the BOSCC when rated on snack routines remain strong, particularly for the social communication domain (Cronbach’s alpha=0.87; ICC=0.93). The BOSCC Total Score was sensitive to change in both play routines and snack routines, although the trajectories were somewhat different across three time-points (see figure). However, the utility of the BOSCC for measuring restricted and repetitive behaviors (RRBs) is less clear. In addition to positive skew in RRB items, there were differences across the play and snack contexts (see table), and inter-rater reliability was lower, although still acceptable (ICC=0.70). Nonetheless, differences in RRBs across play and snack lend support for the claim that measurement across contexts is essential. 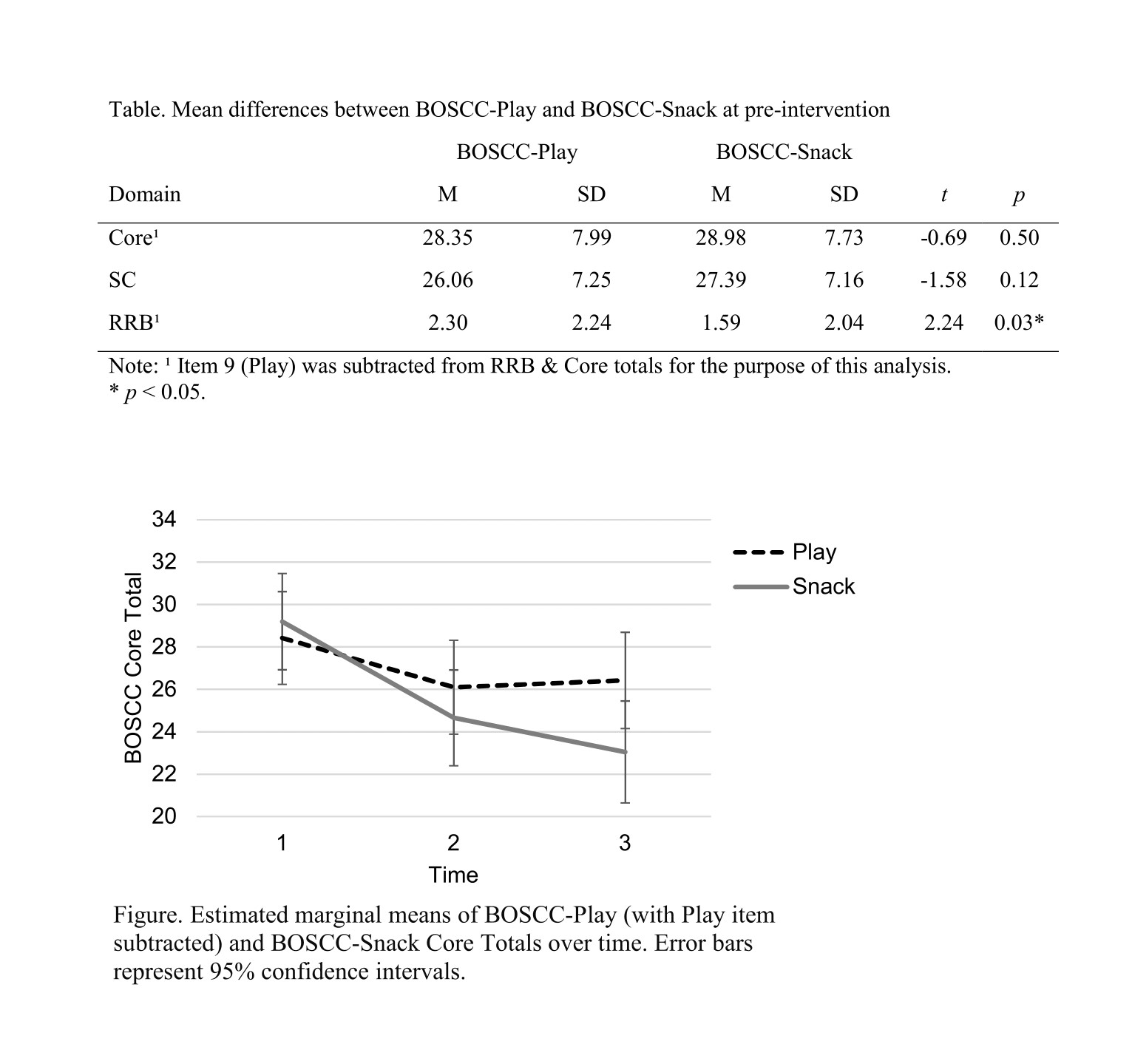