Objectives: 1) Examine the influence of IQ on discrepancies between self- and caregiver-report in a sample of youth with ASD. 2) Probe significant interactions of Reporter and IQ at the subscale level. 3) Determine inter-rater agreement across IQ groups.

Methods: One-hundred ten adolescents with ASD aged 11 to 16 and their caregivers participated. Descriptive statistics are found in Table 1. Data were collected as part of a larger randomized controlled trial. Data for the present study were collected during the pretest research appointment, prior to the adolescents in the experimental group receiving the intervention. Data presented include the Achenbach System of Empirically Based Assessment (ASEBA; Achenbach & Rescorla, 2003) Child Behavior Checklist (CBCL) and Youth Self-Report (YSR) DSM-oriented subscales.

Results: A Repeated Measures MANCOVA of Reporter with IQ as the covariate revealed a significant main effect of Reporter further qualified by a significant Reporter by IQ interaction effect. Univariate follow-up showed significance for the Affective Problems, Conduct Problems, and Post-Traumatic Stress Problems subscales only. Probing using ANOVAs of the interaction between Reporter and IQ revealed the difference between caregiver- and self-report was larger at higher levels of IQ (i.e., 1 SD above the mean) and smaller at lower levels of IQ (i.e., 1 SD below the mean). Partial correlations between Reporters controlling for IQ revealed moderate associations on all seven ASEBA DSM-oriented subscales included. Table 2 shows the descriptive statistics, F values, effect sizes, and significance values for the MANCOVA as well as correlation coefficients and corresponding significance.

Results demonstrated an influence of IQ on discrepancies between adolescent self- versus caregiver-report of comorbid symptoms. A probe of the interaction effect showed a pattern of larger discrepancy between reporters at higher levels of IQ with caregivers reporting higher. This may be partially a product of higher ASD symptoms being associated with lower emotion perception (Gökçen, et al., 2014), when considering that higher ASD symptom endorsement via self-report has been associated with higher IQ (Bishop & Seltzer, 2012). Therefore, comorbid symptoms are likely present across cognitive ability among youth with ASD, but those with higher IQ may have more challenges reporting upon such symptoms. Moderate inter-rater agreement between reporters, when controlling for IQ, indicates that both reporters report in the same direction for symptom severity. Taken together, adolescents and their caregivers may both recognize the presence of symptoms but may disagree regarding symptom endorsement. 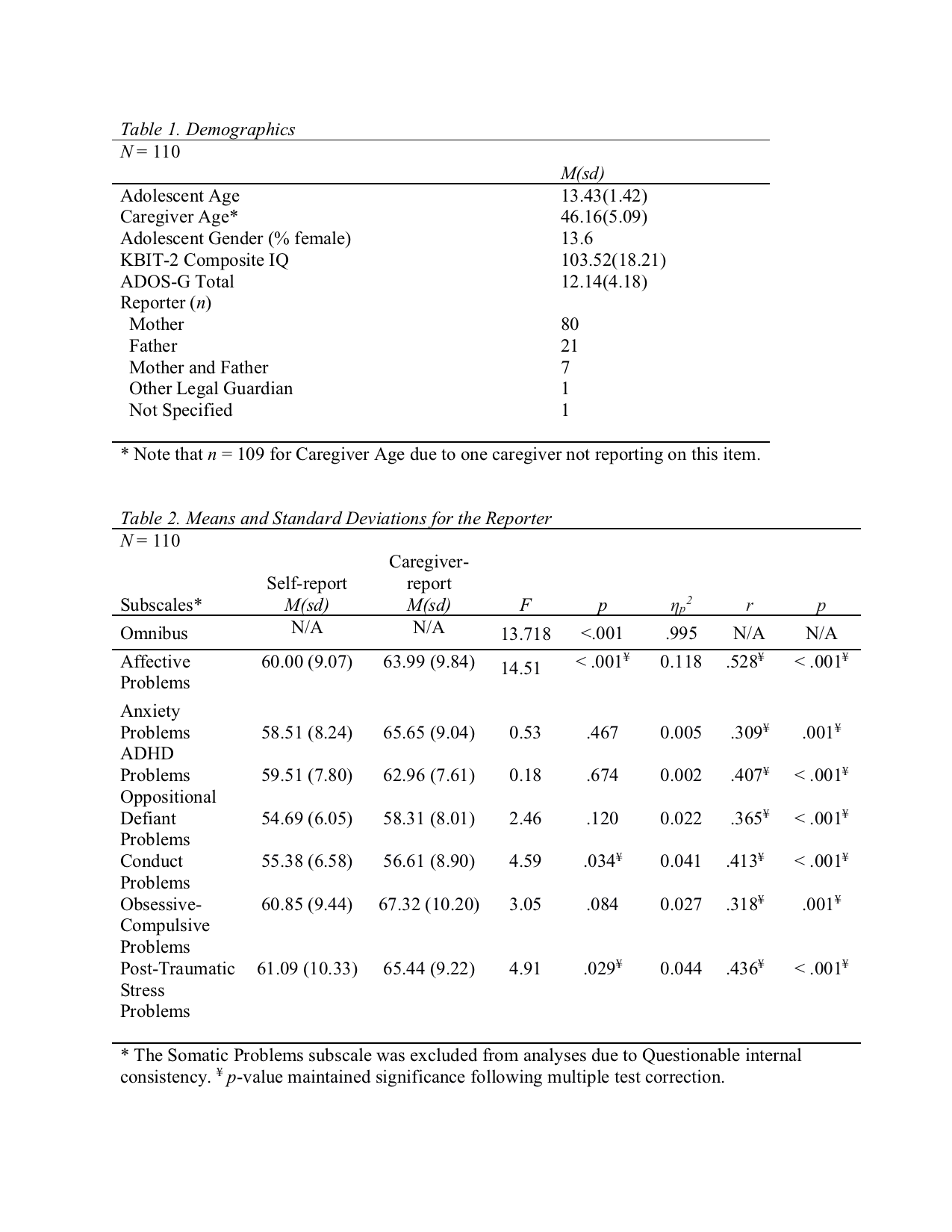