30462
Evidence for Pronoun-Mapping Confusion in Children with ASD

“Pronoun reversals” – confusions between you and I – are believed to be produced more frequently by children with autism spectrum disorder (ASD)1–3 than by typically developing (TD) children. This prevalence has been connected to social impairments in ASD, specifically to problems with self-other awareness4 and perspective-taking5. However, a recent review of language-acquisition literature reveals that children with ASD show relative deficits in assigning meaning for nouns and relative strengths in morpho-syntax7. The authors conclude that “form is easy, [but] meaning is hard” for children with ASD.

If children with ASD struggle to assign meaning for even concrete nouns, reference for pronouns should be particularly baffling, since pronoun reference shifts between entities based on social and linguistic context. This should lead to pronoun-mapping errors beyond confusing you and I. For instance, a child might confuse you and he. And, if form is easier than meaning, children with ASD should make relatively fewer morpho-syntactic errors (e.g., “This is hims”).

Using a caregiver survey, we tested whether children with ASD make more pronoun-mapping errors but fewer pronoun-form errors than their TD peers.

We ask caregivers whether their child uses each of 16 pronouns, and if so, whether s/he always uses it correctly. If the child uses pronouns incorrectly, caregivers provide example errors. Caregivers of children with (N=119) and without (N=112) ASD participated. In the ASD group, children were significantly older (ASD M=53mos; TD M=31mos, p<0.001), and there was a higher proportion of males (86% vs. 71%, c2 =6.21, p=0.02). Proportions of children at different language levels (single-word-, phrase-, vs. sentence-level) did not differ significantly between groups (c2 =2.33, p=0.31).

We focused on children who use at least phrase-level speech, use at least two pronouns but do not always use them correctly (ASD N=67; TD N=62). We categorized caregivers’ example errors as “mapping errors” (person, gender, number) and/or “form errors” (e.g. “Her is funny.”). We used Fisher’s Exact Tests to compare proportions of children who made each error type and found a significant difference in proportions of mapping errors (ASD 63%, TD 35%; p=0.003), but not form errors (ASD 19%, TD 29%; p=0.15). We then compared person, gender, number errors, separately. Children with ASD made more person errors (ASD 25%, TD 14%), but this difference was not significant (p=0.19). Of these, reversal errors made up a smaller proportion for the ASD group (ASD 76%, TD 89%). The ASD group made significantly more gender errors (ASD 42%, 23%; p=0.02). Only three children were reported making number errors; all were ASD.

In accordance with the “form/meaning” hypothesis, a higher proportion of children with ASD make mapping errors than form errors, and significantly more of them make mapping errors than TD children do. The fact that gender and number errors are more prevalent in the ASD group shows that their erroneous use of pronouns is not limited to confusing features that distinguish self from other. Instead, children with ASD seem to have a hard time determining the appropriate meaning for all pronouns. 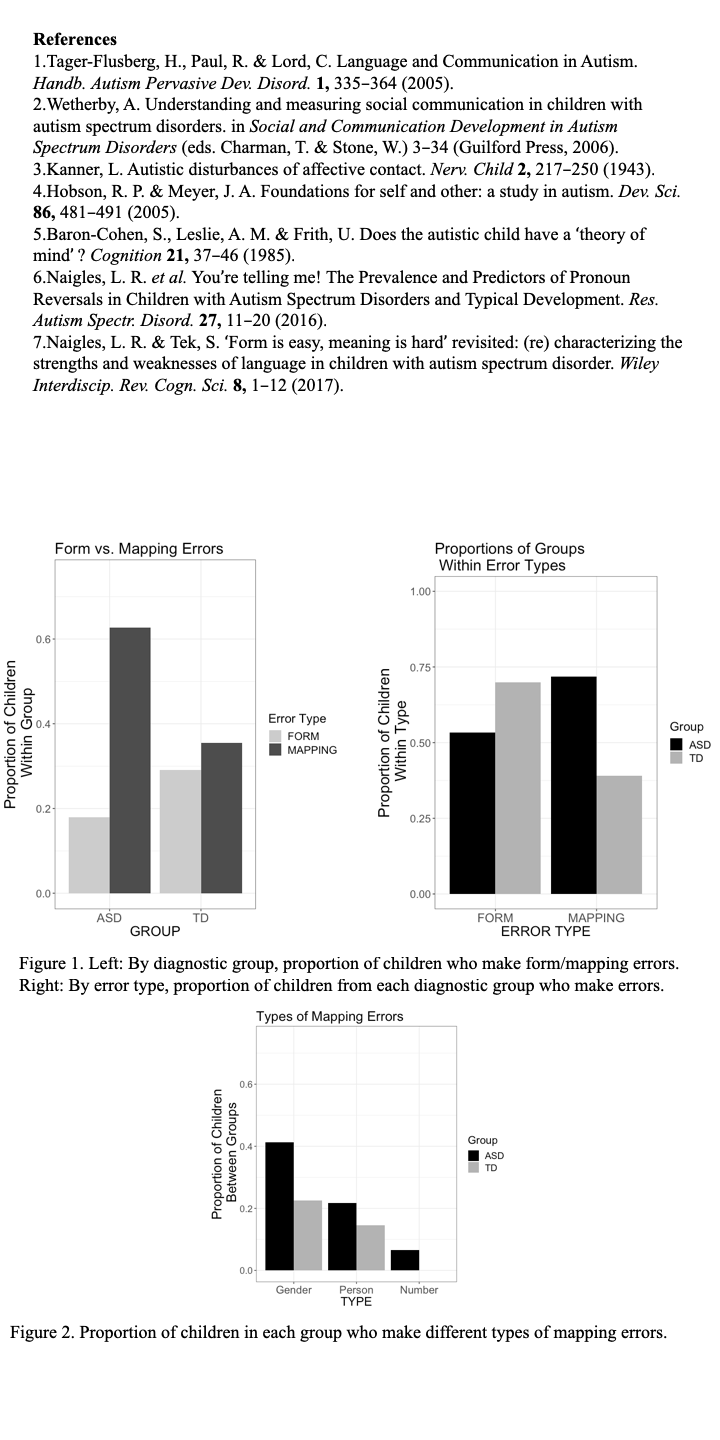