30494
The Voices of Children: Being Friends with Classmates Who Are Minimally Verbal or Nonverbal

Background: Friendships are central to development and overall quality of life. Yet, many children with autism—particularly those who are minimally verbal or nonverbal—have social networks dominated by professionals rather than peers. Despite the critical importance of positive peer relationships, little is known about the nature of friendships of children with autism who are minimally verbal, particularly from the perspectives of the peers with whom they are friends.

Objectives: We will present research focused on an exploratory understanding of the “stuff of friendship” (Bukowski & Sippola, 2005) from the perspectives of children without disabilities who are friends with classmates who are minimally verbal. We specifically addressed the question: How do children think about and experience friendship across different relationships (i.e., with any friend and specifically with a friend who is minimally verbal)?

Methods: We conducted a qualitative study using in-depth interviews and based on the grounded theory approach (Strauss & Corbin, 2008). Data collection consisted of individual, semi-structured interviews with 16 children (i.e., ages 8-10) who were friends with a classmate with autism or a related developmental disability who was nonverbal or minimally verbal. Participants responded to questions about any self-selected friend, and then about the identified friend with a disability. Data were analyzed using an inductive approach guided by grounded theory and the constant comparative method. We used repeated systematic coding, collaborative dialogue, diagramming, and memoing to generate a theory of friendship development across children’s relationships. Credibility and trustworthiness were enhanced through multiple avenues: conducting repeated, systematic searching of the data; developing an audit trail; using a collaborative approach to analysis; searching for negative cases; and triangulating sources of data through sustained presence in the schools before and during the period of data collection.

Results: The developed theory of friendship involved four intertwined major categories: proximity as the entry point to friendship, varying depths of friendship, key agents influencing friendship development, and a continuum of help-care (see Figure 1). In friendships with classmates who were minimally verbal, these major categories also interacted with the impact of and language around disability.

Conclusions: We will share these major categories—and their intersections—from the ways children talked about their friendships generally and specifically with classmates who were minimally verbal. We will also discuss implications for using qualitative methods to understand the lived experiences of a variety of key stakeholders, including peers who are friends with children with autism.

Figure 1. Conceptual model of a grounded theory of friendship development across different types of relationships 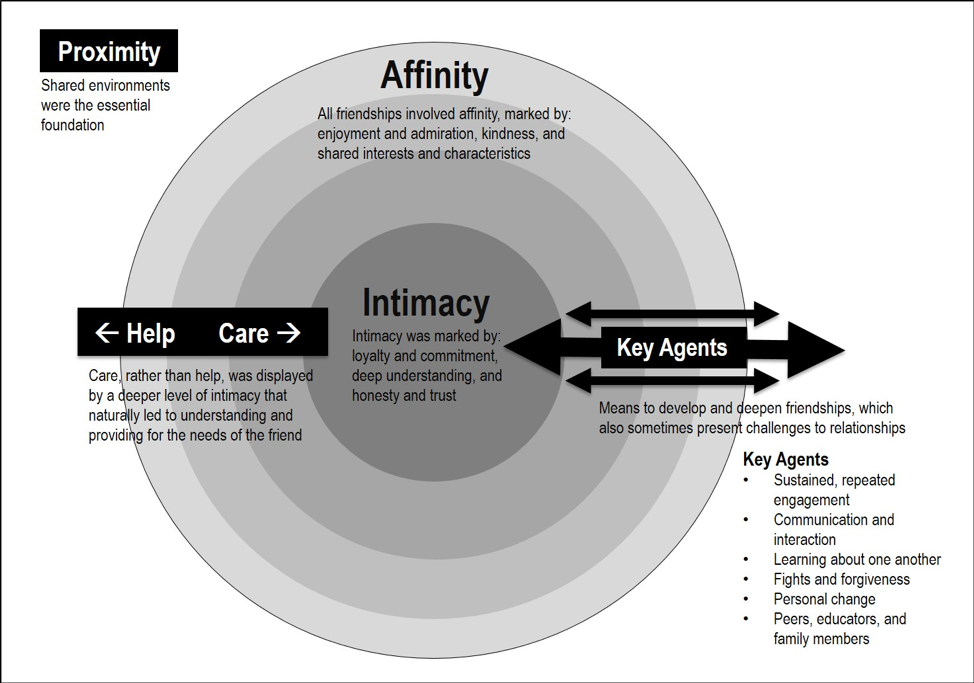