Objectives: To identify practitioner perceptions of supports and barriers to RMI implementation.

Methods: Eight practitioners who used RMI with children with ASD (three with programming expertise[PE], five with no programming expertise[NPE]) were recruited with assistance from Mike Radice(ChartaCloud Robotics). They completed a survey with six demographic(e.g., specialization, caseload size), 12 yes/no(e.g., “is the program interface easy to use?”), and 10 open-ended questions(e.g., “What is your opinion about robots as an intervention tool?”). Mixed methods analyses were conducted: thematic analyses(Attride-Sterling, 2001) identified Basic, Organizing, and Global themes for open-ended questions; descriptive analyses examined quantitative data for PE and NPE practitioners.

Results: Three Organizing Themes (benefits of robot instruction/learning, usefulness of robots, and individualized response to robots) emerged from the question about robots as an intervention tool. Practitioners reported that robots can facilitate social behaviors and promote generalization through predictable, motivating activities. Robots’ usefulness was limited by reduced functionality, ease of use, and number/variety of programs, and increased costs. Robots were perceived to be more or less useful than other technologies, based on users’ experiences. Students’ responses, motivation, and engagement with the robot were reportedly individualized. The Organizing Themes converged around one Global Theme(perceptions of robot benefits/drawbacks).

A question about limitations of apps for individualized intervention yielded two organizing themes (robot apps/interface are not user-friendly, robots’ design limits practical scope/usefulness for intervention). Practitioners reported that apps were not flexible/customizable to suit users’ needs. Robots’ functionality was reportedly limited/inconsistent, and apps did not account for individual needs of students with ASD. Existing apps were limited in number, curriculum, target behaviors, and appropriateness. The Organizing Themes converged around one Global Theme(robot app limitations).

Quantitative data reinforced qualitative results, especially related to robots’ ease of use and customizability. Three NPE practitioners indicated programming was difficult and time-consuming. One PE and two NPE reported the programming interface was not easy to use. Four NPE practitioners preferred for a programmer to help program the robot and believed RMI would be more effective if a programmer could help them design their own intervention. Six of eight practitioners agreed that a robot that could learn through demonstrations rather than programming would be beneficial. 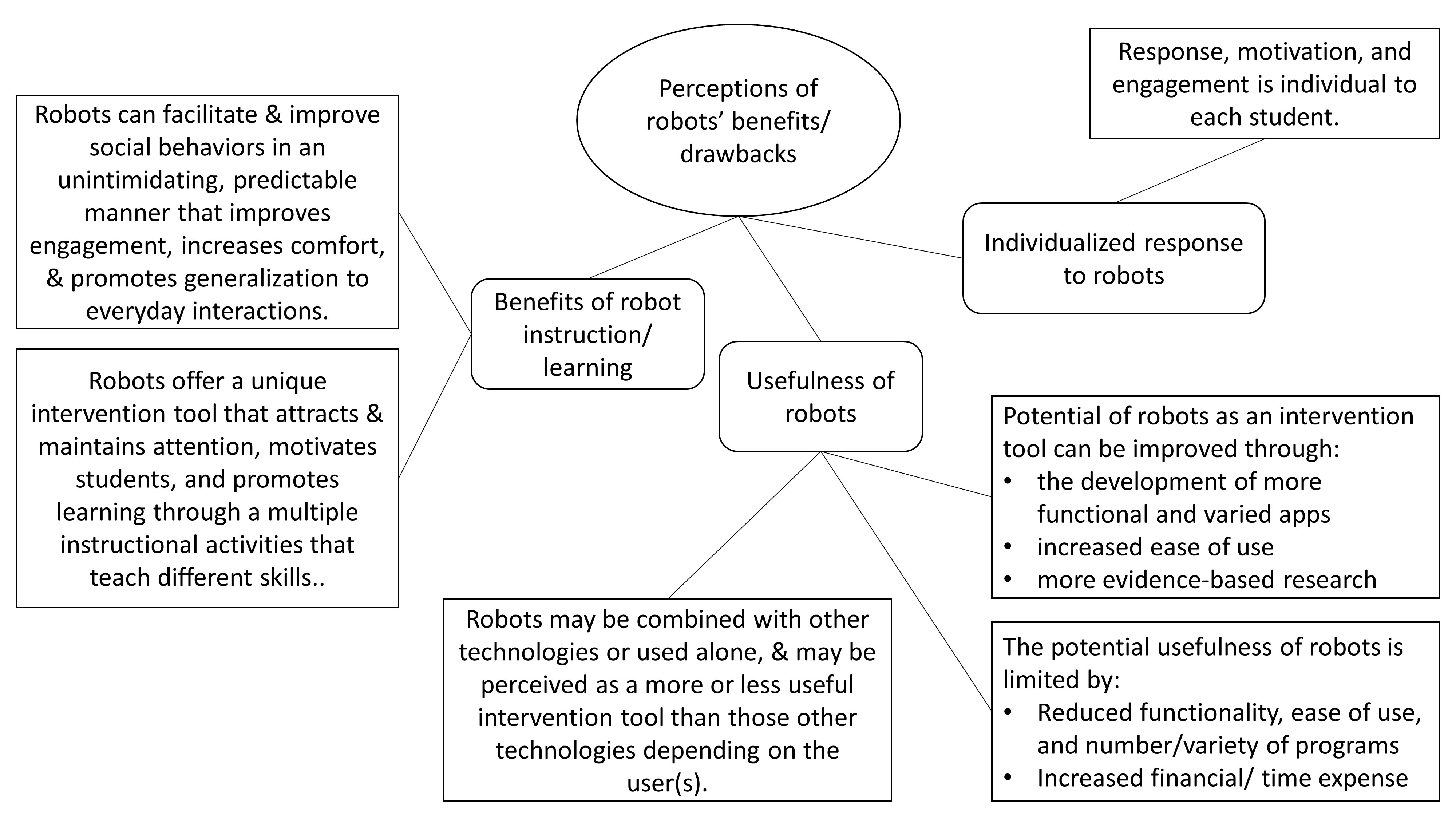