Objectives: The present study uses a larger sample to (1) determine whether the relationship between walking ability and subsequent rate of language development is significantly attenuated in infants with ASD, and (2) assess whether walking ability is related to growth in language skills specifically or in nonverbal cognitive skills as well.

Methods: 156 low-risk (LR) siblings of TD children and 361 high-risk (HR) siblings of children with ASD were tested at 12 and 24 months (m) of age as part of the Infant Brain Imaging Study. Based on ASD status and Mullen Scales of Early Learning language scores at 24m, HR infants were assigned to the ASD (HR-ASD; N=80), language delayed (HR-LD; N=34), or no diagnosis (HR-ND, N=247) group. 14 LR infants with atypical outcomes (LD, N=11; ASD, N=3) were excluded from analysis. To measure walking ability at 12m, a novel composite comprised of Mullen and Vineland Adaptive Behavior Scales-II items indexing walking-related behaviors was calculated (Cronbach’s α=.9). Separate mixed effects models were run predicting Mullen expressive language (EL), receptive language (RL), and visual reception (VR) raw scores including age, walking score, and a 4-level factor for group (reference=LR) as fixed effects, all interactions, and random intercepts. In these models, the age-by-walking score interaction represents the relationship between walking ability and growth in Mullen scores in the LR group, while each 3-way interaction reflects the difference in this relationship between a particular HR group and the LR group.

Results: The interaction between age and walking score was significant in the model for EL (β=0.20, p=.03), confirming that better walking was associated with increased EL growth for LR infants (Figure 1). The effect of walking scores on EL growth was significantly attenuated in the HR-ASD group compared to the LR group (β=-0.13, p=.04) and was marginally attenuated in the HR-LD group compared to the LR group (β=-0.09, p=.08). No other three-way interactions were significant for EL. No interactions including walking score were significant for RL or VR; thus, walking ability was only associated with EL development.

Conclusions: For LR infants, better walking ability at 12m was associated with greater subsequent gains in EL. Only the HR-ASD group displayed a statistically different relationship between walking ability and EL growth relative to the LR group, though this effect was trending in the smaller HR-LD group. Importantly, walking ability was related only to EL and not RL or VR growth, suggesting that walking is specifically related to EL rather than to cognitive maturation more broadly. 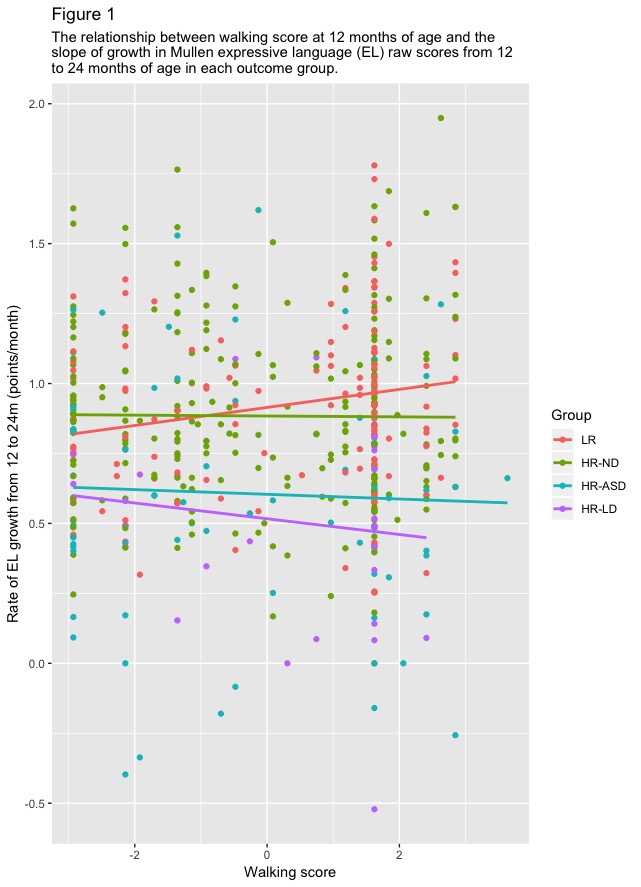