Impairments in nonverbal communication, including co-speech hand gestures, are required for a diagnosis of autism spectrum disorder (ASD). Co-speech gestures serve a range of communicative functions, often measured by categorizing them into discrete types, e.g., representational gestures (“descriptives” on the ADOS, which depict visuospatial properties of referents), interactive gestures (which convey social functions such as emphasis or turn-taking), and deictic (pointing) gestures. Several studies have now shown that individuals with ASD select gesture types differently than controls, suggesting that they rely more on certain communicative features. In addition to differences in nonverbal communication, another hallmark feature of ASD is difficulty adjusting behavior to fit the specific context at hand. Very little research has examined if, and how, nonverbal communication strategies might change based on social/communicative context.

Verbally fluent children and adults with ASD (n=39) and typically developing controls (TDC; n=14, see Table) were group-matched on age, gender, and full-scale IQ. An additional n=10 participants per group will be added to the dataset by INSAR 2019. Participants completed two controlled communicative tasks, designed to evoke spontaneous gestures (participants who did not produce any codable gestures were excluded from this dataset). In the “Cartoon” task, participants described a Looney Tunes cartoon, and in the “Box” task, participants described how a shape sorter toy worked. Gestures were coded according to the types described above, with the addition of pantomime gestures, which are representational gestures produced in the absence of speech.

This study replicates previous work demonstrating that autistic individuals use gesture to fulfill different communicative functions than controls. Counter to our predictions, however, we found that participants with ASD were equally sensitive to the change in communicative context, and modified their gesture selection accordingly. Finally, we found that, across tasks, individuals with ASD were more likely to use “pantomime” gestures, in which they enacted their gesture in the absence of speech. On one hand, this finding reflects a weakness: reduced integration across verbal and nonverbal modalities. However, we also see this as a strength, in that participants identified an effective way to transmit information about the world. 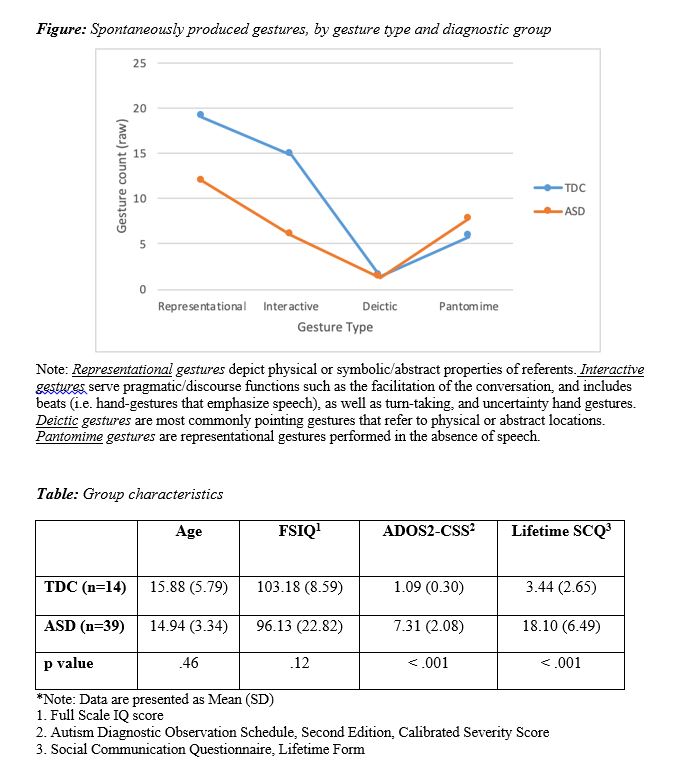