Poster Presentation
Room: 710 (Palais des congres de Montreal)
M. Barokova1 and H. Tager-Flusberg2, (1)Department of Psychological and Brain Sciences, Boston University, Boston, MA, (2)Psychological and Brain Sciences, Boston University, Boston, MA
Background: Numerous studies have examined the effects of linguistic input on children with autism’s expressive language (e.g.,Fusaroli et al.,2018). In the domain of person-reference, or how a speaker refers to themselves and their conversational partner: using pronouns (e.g., I, you) or nouns/names (e.g., kiddo, mom, John), one study showed that the parental input of toddlers at high risk for autism was characterized by a higher use of the child’s name, especially in the context of attracting the child’s attention, compared to the input of low-risk toddlers (He et al.,2018). Furthermore, studies have provided evidence for children with autism’s avoidance of pronouns and preference for using their own name (e.g.,Shield et al.,2015). Nevertheless, no study has directly examined the effect of parental input on person-reference in autism.

Objectives: We aimed to examine the relation between preschoolers with autism and their parents’ person-reference. We focused on amount of person-referential language and on preference for one form of reference, pronouns, over the other, nouns/names, both concurrently and across time.

Conclusions: In contrast to past research showing general influence of linguistic input on expressive language in autism, we found no associations between parents’ and children’s person-reference either in amount or in preference for one form of reference over the other. Children used significantly more pronouns and this preference did not change across time. These results combined with the children’s relatively strong expressive language as evidenced by their Mullen scores suggest that the factors contributing to the use of person-reference in ASD may be primarily non-linguistic after a certain baseline language ability is achieved. These findings can inform clinical advice to parents about ways of addressing their children with ASD. 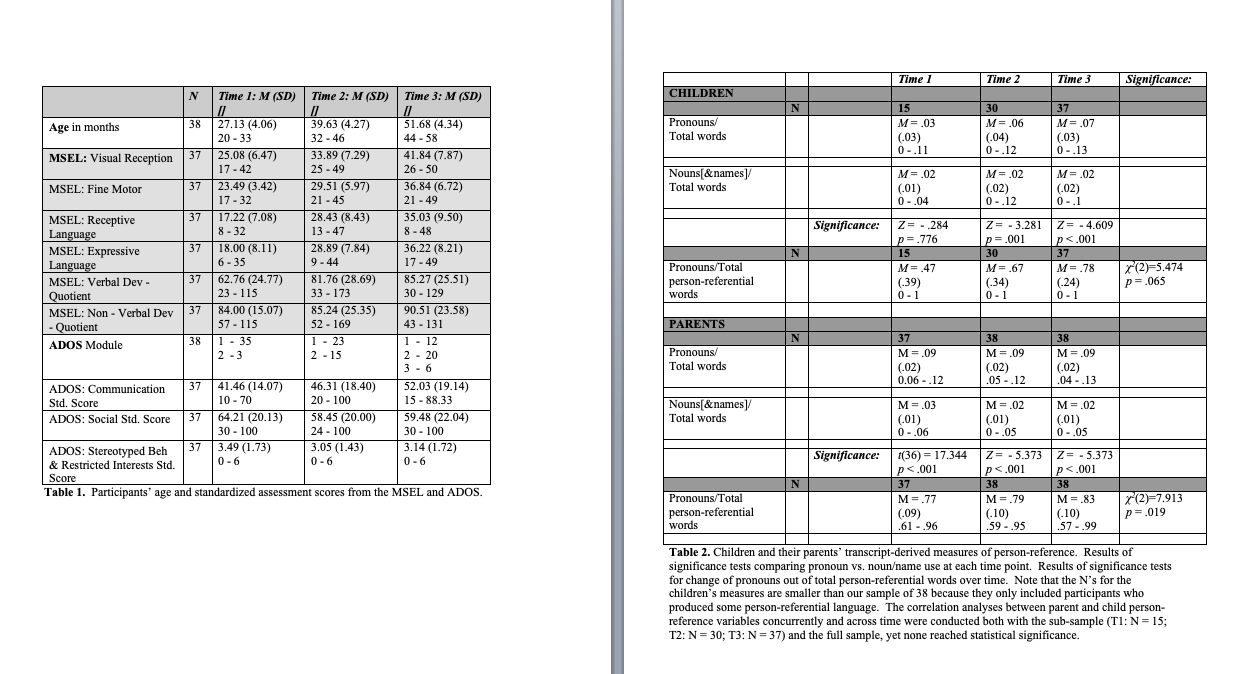