Co-speech hand gestures augment verbal communication by mapping a visual accompaniment. Research on gesture in verbally fluent individuals with ASD is equivocal when it comes to how often gesture is used to supplement speech, suggesting that global variables (e.g., rate) may not adequately capture gesture differences in ASD. Thus, here we take a more granular look by investigating the communicative contribution of each individual gesture spontaneously produced during an interaction. The contribution of an individual gesture can be analyzed in at least two ways: quantitatively and qualitatively. A quantitative measure looks at how much content a gesture contributes to the interaction, whereas qualitative features measure how well a gesture carries out its intended purpose. We predicted that quantitative features would not adequately account for group differences in gesture use, given the countless nuances involved in live social interaction. Instead, we hypothesized that qualitative, or “subjective,” features of gesture are more pronounced markers of ASD than quantitative features.

Verbally fluent individuals with ASD (n=36), aged 10 to 35, and typically developing controls (TDC; n=14), were given two communication tasks to elicit co-speech gestures. Participants were group-matched on age, gender, and full-scale IQ. In the “Box” task, participants were asked to play with a shape-sorter toy for 15-30 seconds, and then asked to describe how it worked. In the “Cartoon” task, participants were shown a short clip of a cartoon, and then asked to describe it. Spontaneous gestures produced during both tasks were coded from videos for quantitative and qualitative features. Quantitative features included how often a gesture added new information to speech, and how often two-handed gestures were used—in other words, how often a gesture was cognitively or visually expansive. Qualitative features included certainty (rater’s certainty that a given hand movement was a gesture), and confidence (rater’s confidence in the intended meaning of the gesture). Coders were undergraduate student research assistants, who were naïve to participant diagnostic status. All variables were z-score transformed for comparison.

Qualitative features of gesture, such as certainty and confidence, may be more robust markers of ASD than quantitative features. That is, while the general content conveyed by individuals with ASD through gesture may be similar, their gestures may be less clear and thus less communicatively effective. Qualitative ratings are likely better predictors of group membership because they capture more of the nuances involved in nonverbal communication. 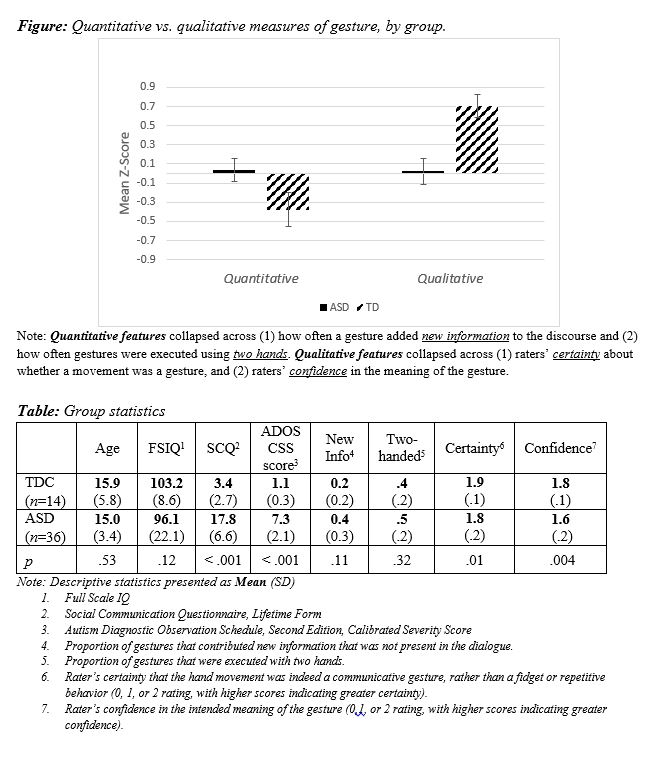