Objectives: Building upon prior work demonstrating that experts on a specific topic perform better on visual search tasks related to that topic, we created a novel visual attention task personalized to each individual’s circumscribed interest. The goal was to determine whether low-level visual features were processed differently for interests in ASD vs. TD. We hypothesized that participants with ASD would perform better than TD participants due to the increased visual processing abilities that ASD individuals have for interests.

Methods: 29 individuals (5-30 years of age, mean = 15.38; 14 ASD) completed a novel visual search task personalized for his or her circumscribed interest. In the lab, participants were required to locate an unscrambled image in a group of scrambled distractor images as quickly as possible, presented on an iPad. Each trial had either 3, 15, or 35 distractor images, with a total of 108 trials. There were 3 conditions: pictures of faces, pictures of houses, and pictures of the participant’s interest. Accuracy and reaction times were calculated for the three array sizes and by each condition. Caregivers completed the RBS-R as well as a novel questionnaire asking about the intensity and prior history of circumscribed interests. Analyses were conducted using Matlab.

Conclusions: Our current task did not demonstrate significant difference in performance between ASD and TD individuals, suggesting that the difference in affective salience occurs at a different, higher level of visual processing than our current low-level visual processing task required. In the future, we will further probe at what level of the visual stream differences emerge between ASD and TD individuals for processing cues that represent one’s interests. 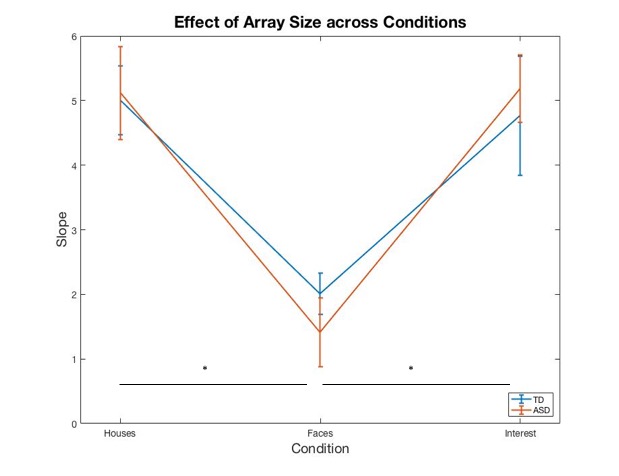