Objectives: We investigated similarities and differences in interference of social and non-social cues with cognitive control in children with ADHD and/or ASD, compared to typically developing children. We expected 1) reduced cognitive control towards interests in ASD, irrespective of ADHD comorbidity, and 2) reduced overall cognitive control, specifically to social stimuli, in ADHD.

Methods: 127 children, aged 6-11 years, who had ASD (with/without comorbid ADHD), ADHD, or were typically developing (TD), performed a go-nogo paradigm with social and non-social cues. For the social conditions, participants were presented with happy and calm faces. For the interest conditions, participants chose their favorite (interest) and least favorite hobby/activity (non-interest) from 23 options. There were 5 different runs of go-nogo pairs (blue vs. yellow rectangles, happy vs. calm, calm vs. happy, interests vs. non-interests, non-interests vs. interests). Participants were instructed to press to the target cue (go) when it appeared on screen and not press to the distractor cue (nogo). Using Linear Mixed-Effects models group differences in hit rate, false alarms and the sensitivity index d-prime were tested.

Results: In the non-social condition, there was an interaction effect betweentask condition and diagnostic status on d’ (F(4,192) = 2.9, p = .024). Children with ASD showed reduced cognitive control towards their interests as compared to their own non-interests (p = .044) or colored shapes (p = .003)(Figure 1A). The presence of comorbid ADHD did not change this pattern in children with autism. Further, typically developing children showed increased cognitive control to colored shapes, compared to interests (p < .001) or non-interests (p < .001), whereas children with ADHD did not show any differentiation between stimuli (all p’s > .05). In the social condition, there was a main effect for task condition (F(2,171) = 66.0, p < .001)(Figure 1B), where all children performed better to colored shapes, as compared to happy or calm facial expressions (both p’s < .001). Latent profile analyses grouped participants in three independent classes, that showed differentiating patterns of performance across condition, regardless of primary diagnosis (Figure 1C&D). 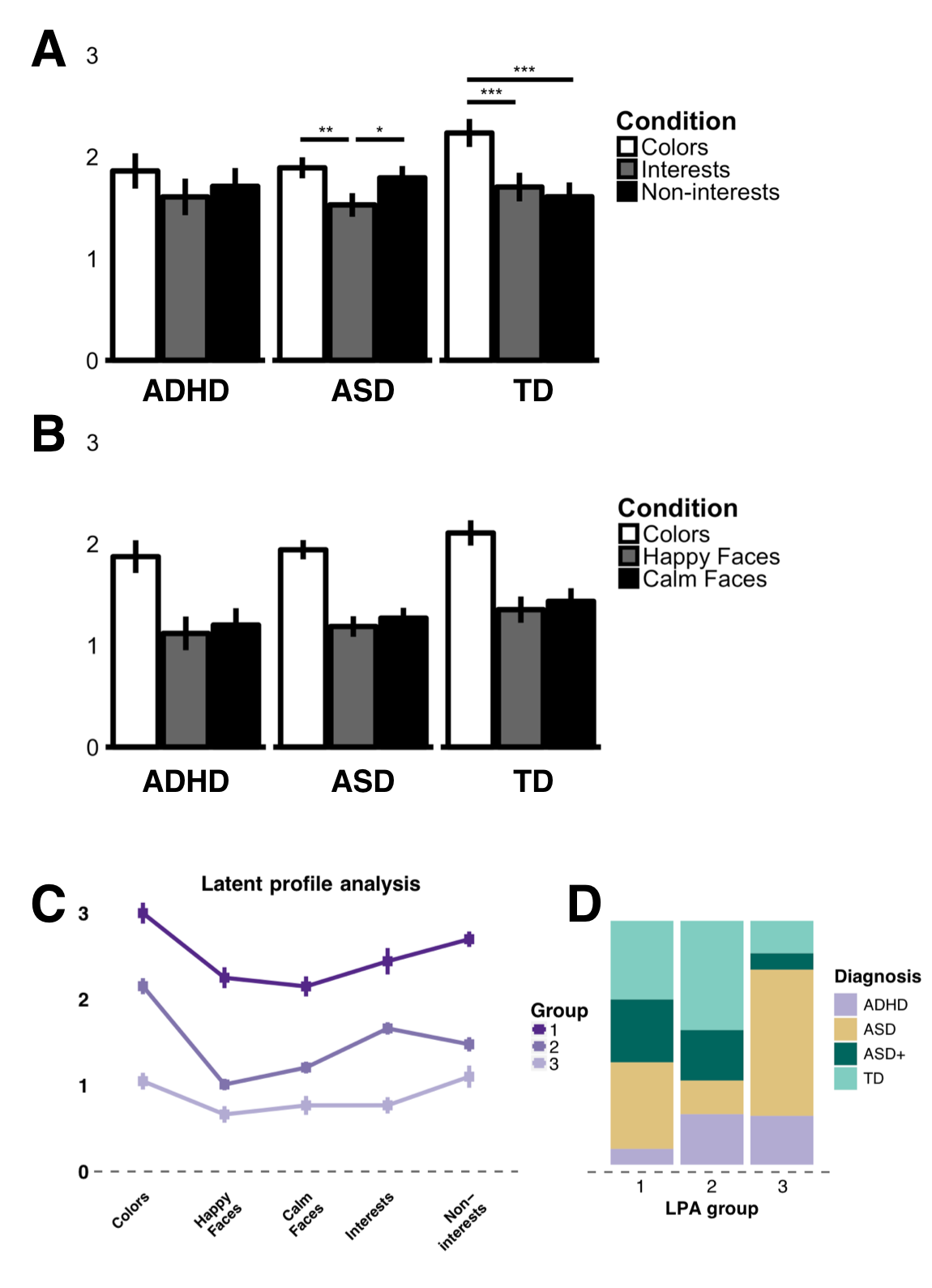