ASD is a lifelong disorder requiring continual services and supports to ensure success. Despite the best efforts of special education, the outcomes for individuals with ASD after high school are bleak. Of particular concern is a sub-group of adolescents with high-functioning autism (HFA). Although these individuals have the potential to fully participate in mainstream community activities, outcomes for many adults with HFA are surprisingly poor in the areas of secondary education, employment, independent living, and social participation. These individuals are three times more likely to have no daytime activity compared to adults with an intellectual disability (Taylor & Seltzer, 2011). The transition process is a time of great opportunity and risk for these adolescents and their families. Without adequate supports, families lack awareness of and access to services and adolescents often do not achieve their full potential.

Adolescents’ and parents’: (a) goals and aspirations for adult life; (b) views of transition areas they feel most and least prepared for; and (c) views of needed services and supports to support the transition to adult life will be identified.

Parents and adolescents (ages 13-18) participated in separate focus groups. Parents completed the Social Responsiveness Scale Version 2 (Constantino & Gruber, 2012) to document their child’s functioning level. In the focus groups, 36 parents and 26 adolescents (ages 13-17) from both rural and urban areas were asked about their goals after high school, and the services and supports they have used and need to facilitate a successful transition to adulthood. Using a card sort activity, participants provided information about transition areas for which they felt most and least prepared. Focus groups were audio taped and transcribed verbatim. A constant comparative method and consensus coding process were used to validate the major themes highlighted by parents and adolescents.

The parents were generally positive about their youth, highlighting strengths while acknowledging their individual challenges. While the adolescents had aspirations for independence, they expressed concerns regarding future employment, education, and relationships. Interestingly, parents and adolescents’ views were often similar but different in subtle ways. The similarities and differences will be described in terms of goals for adult life, concerns regarding independence, and perceived needs for services and supports. Parents’ goals focused on successful employment and independent living whereas adolescent goals related to employment focused on their specific interests such as computers or fantasy novels. While parents’ major concerns related to social interaction (e.g., having friends to do things with), getting a job, and living independently, adolescents’ major concerns related to being financially secure, and having a safe place to live and the social skills needed to maintain employment. Both parents and adolescents identified needs for continued supports.

The adolescent and family perspectives indicated a need for capacity building supports tailored to what really matters to stakeholders for achieving successful adult outcomes. Those supports include social support for the adolescent and family, accessible and useble information about the adult service system, and continued professional supports according to adolescent’s individualized needs. 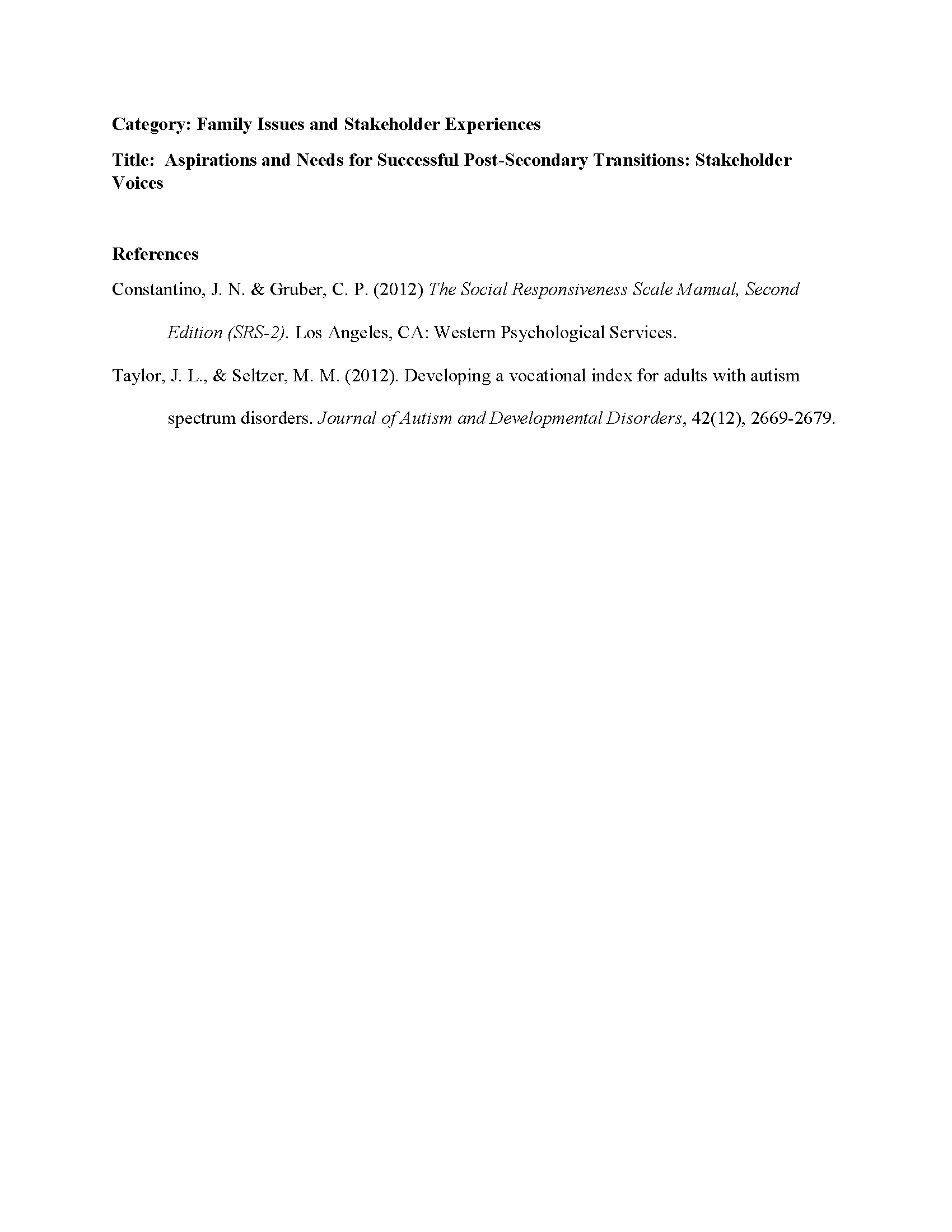