Objectives: The present study represents a confluence of these two lines of research. We sought to examine whether enhanced perceptual capacity is unique to ASD, unique to anxiety disorders (with the ASD findings being a consequence of high comorbidity), or is attributable to a mechanism intrinsic to both of these conditions.

Results: Detection sensitivity (d’) for the ‘squiggle’ detection task served as the primary dependent variable. Data were entered into hierarchical linear model analyses with group (ASD and non-ASD) and STAI anxiety scores as between-subject factors and array size (1, 2, 4, or 6) as a within-subject factor. As anticipated, there was a main effect of condition [F(3,165)=16.72, p<.001], indicating that performance declined at higher set sizes. The main effect of autism group trended towards significance [F(1,53)=3.32, p=0.07] with generally lower d’ scores for the ASD group. There were no main effects of anxiety, two-way, or three-way interactions between condition, group, and anxiety [all F<1]. When comparing highly elevated anxiety scores (>1.5SD above normative STAI score) with typical anxiety scores at array sizes 2 and 4, we found a significant interaction between array size and anxiety group [F(1,52)=5.89, p=.019] such that d’ declined significantly from array size 2 to 4 for individuals with typical anxiety scores but not for individuals with elevated scores.

Conclusions: Consistent with recent literature, these findings indicate that elevated levels of anxiety are associated with superior perceptual capacity. This was true across both the ASD and non-ASD groups. A main effect of ASD diagnosis was also evident such that individuals with ASD showed poorer overall performance. Although speculative, comorbid anxiety may have contributed to previous reports of enhanced performance in samples of individuals with ASD. Additional research is needed to fully understand the interplay between ASD, anxiety, and perceptual capacity. 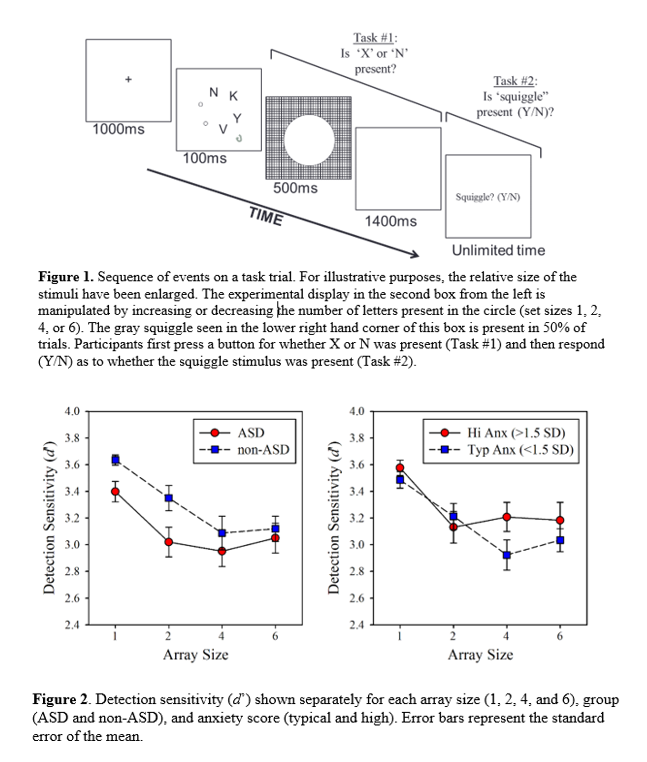