Mixed methods research provides comprehensive information on barriers and facilitators to treatment implementation and sustainability (Brownson et al., 2018). Participant acceptability is an important implementation consideration in clinical research (Smailes et al., 2016), such that higher acceptability is correlated with greater adoption (Lewis, Weiner, Stanick & Fischer, 2015). Furthermore, in the principle of participatory processes, participant feedback allows for adaptation of interventions based on the experiences of the targeted group (Green, Glasgow, Atkins, & Stange, 2009). This has substantial potential to impact effectiveness, adoptability and implementation.

To evaluate acceptability of the school- and home-based interventions, Unstuck and On Target (UOT) and Parents and Teachers Supporting Students (PATSS) through quantitative and qualitative student feedback.

In a comparative effectiveness trial, schools were randomized to either the cognitive-behavioral executive function treatment, UOT, or the contingency behavioral management program, PATSS. Upon completion of the trial, students (N=130), who had an ASD or ADHD diagnosis, were given a 5-question survey to evaluate overall enjoyment, knowledge gained, and what they liked and disliked about the intervention. Answers to three questions were indicated on a 3-point Likert-type scale. Two questions were asked in an open-ended format and responses were analyzed using the qualitative data analysis software, ATLAS.ti. These responses were separated and coded into categories based on their content, resulting in a greater number of responses than there were students.

Overall students in both groups liked the interventions and learned from them. Future implementation of both interventions should consider scheduling, frequency and group size, such that students are able to attend the intervention group with frequency, without missing other school activities such as recess, and in small groups. 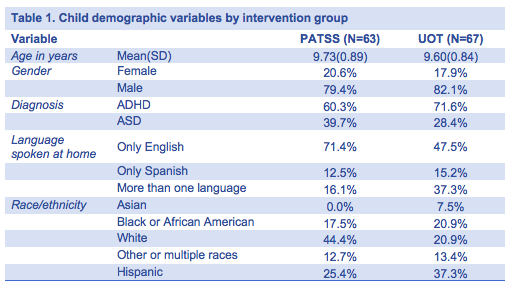