This prospective longitudinal study aims to explore the developmental trajectories and early-life predictors of language skills during mid-childhood (6-8 years) in children at increased familial risk for ASD. Specifically, we aimed to examine if 1) children at high-risk for ASD exhibit difficulties with language skills; 2) there are differences in language skills among high-risk children who meet diagnostic criteria for ASD and those who do not; and (3) language outcomes during mid-childhood are associated with social attention during infancy.

Language ability was measured at age 6-8-years in a cohort of children at high-risk (HR) for ASD, who have been studied prospectively since infancy. Expressive (EL) and receptive (RL) language skills were assessed using the Clinical Evaluation of Language Fundamentals (CELF) and the Vineland Adaptive Behaviour Scales (VABS), which measure structural language and communicative skills, respectively. Language skills were compared between high-risk children who met DSM-5 criteria for ASD (HR-ASD; n=15), high-risk children without ASD (HR-non ASD; n=27) and low-risk controls (LR; n=37). Social attention was measured using a battery of eye-tracking tasks at ages 7- and 14-months. Of particular interest was the association between early gaze-following (GF; proportion of first looks to the correct object), attentional engagement (AE; proportion of time spent looking at the correct object) and Eye-Mouth Index (EMI; attention to eyes relative to the mouth) during social scenes and later language development. ASD symptoms were measured using the Social Responsiveness Scale-2 (SRS-2).

There were no significant group differences in performance on the CELF, but there were significant differences on both the EL and RL scales of the VABS. Group comparisons suggest that the HR-ASD group had significantly lower scores than the LR group. EMI at 7-months was significantly associated with expressive language scores on the CELF in both the HR (r(21)=-.49, p=.004) = and LR groups r(23)=-.57, p=.02), where increased attention to the mouth was associated with better language skills (Figure 1). However, increased attention to the mouth was also associated with higher ASD symptoms in the HR group (r(26)=-.41, p=.03). There were no other significant associations between the language measures and AE, GF or EMI. 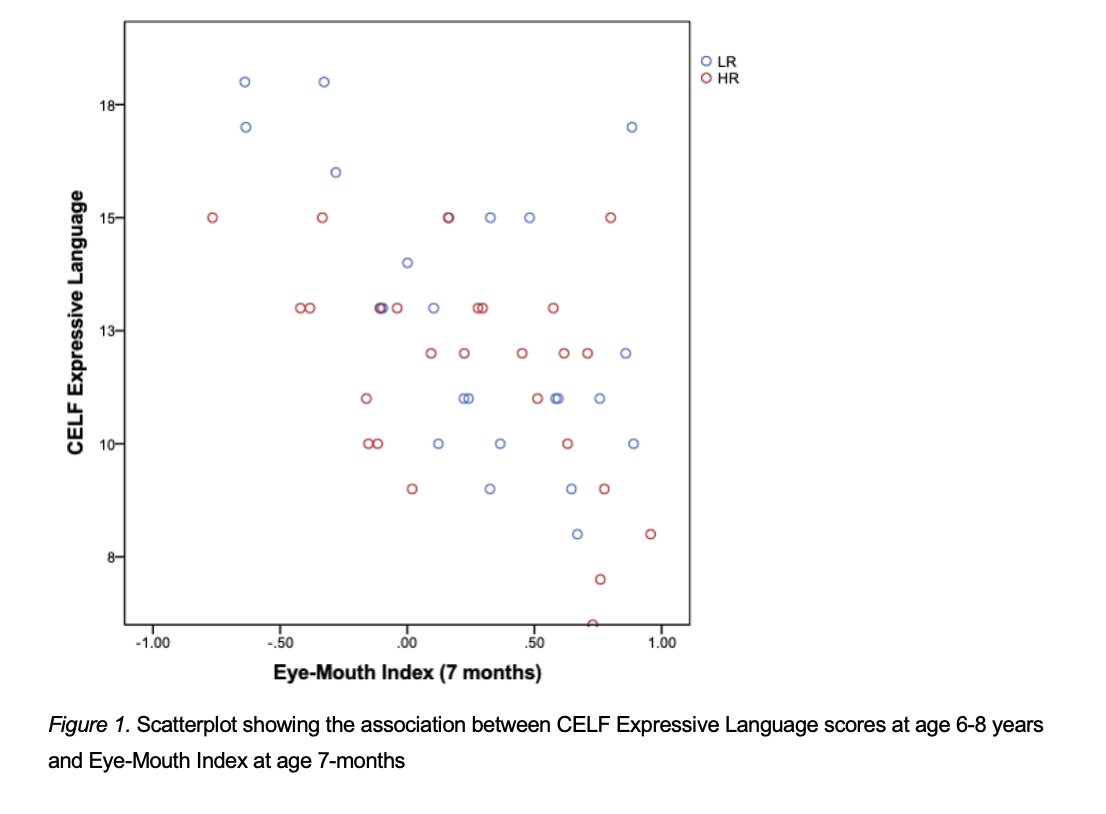