Poster Presentation
Room: 710 (Palais des congres de Montreal)
C. Halpern1, K. M. Hauschild2, A. Roussos2, M. D. Lerner2 and G. Zelinsky2, (1)Psychology, Stony Brook University Dept. of Psychology, Stony Brook, NY, (2)Psychology, Stony Brook University, Stony Brook, NY
Background: Individuals with autism spectrum disorder (ASD) often demonstrate superior detail-oriented perceptual skills and diminished feature-binding into a holistic percept (Behrmann et al., 2006). This may relate to etiology of core ASD symptoms (Happé and Frith, 2006), and the presence of ASD traits in neurotypical (NT) populations (Chouinard et al., 2013). Detail-oriented processing in ASD is associated with elevated performance on visual search tasks (VS; Gilga et al., 2015; O’Riordan et al., 2001). However, paradigms that most reliably elicit superior VS in ASD are low-demand, feature-conjunction search paradigms that do not rely on holistic processing (HP); in studies employing naturalistic object-search, which utilize HP, no such effect has been shown (Kaldy et al., 2016). Thus, it is unclear if superior VS in those with ASD (and greater ASD traits) is truly associated with greater detail-oriented processing, or if it is an artifact of reduced HP requirements of extant tasks. Computational models of VS predict that HP increases efficiency of search processes by imposing top-down control on neurocognitive pathways involved in deciding if a stimulus is the target (Rao et al., 2002). Given that HP is required when engaging in real-world activities like searching for objects in one’s environment, a task that directly investigates the degree to which HP for objects aids in naturalistic VS (i.e., object-facilitation) would be valuable for determining when and if detail-oriented visual processing translates into functional benefits for individuals with ASD.

Objectives: To determine whether VS advantage associated with ASD symptomology extends into more ecologically valid tasks of scene perception by operationalizing object-facilitation in a naturalistic search paradigm.

Methods: Forty-six NT adults (Mage=21.04, SDage=2.26; 12 male) completed a naturalistic VS task for object and non-object targets (Figure 1) while eye-tracking data were recorded. During the task participants rated each target according to objectness on a 1-5 scale (1 = “target was not a single, complete object; 5 = “target was a single, complete object”). Target decision time (TDT) was calculated by subtracting the time of initial target-fixation from that of behavioral response of correctly identifying the target when looking at it. Variations in ASD characteristics were measured using the Autism Spectrum Quotient (AQ; Baron-Cohen et al., 2001).

Conclusions: These data indicate that while individuals with high ASD symptomology demonstrate improved performance on traditional VS tasks (O’Riordan et al., 2001), when complexity of the task is increased to better approximate real-world visual scenes, this advantage is attenuated, even in sub-clinical populations. ASD characteristics might instead relate to deficits in real-world VS, which often involves searching for whole-objects, due to possible deficits in HP associated with the disorder. 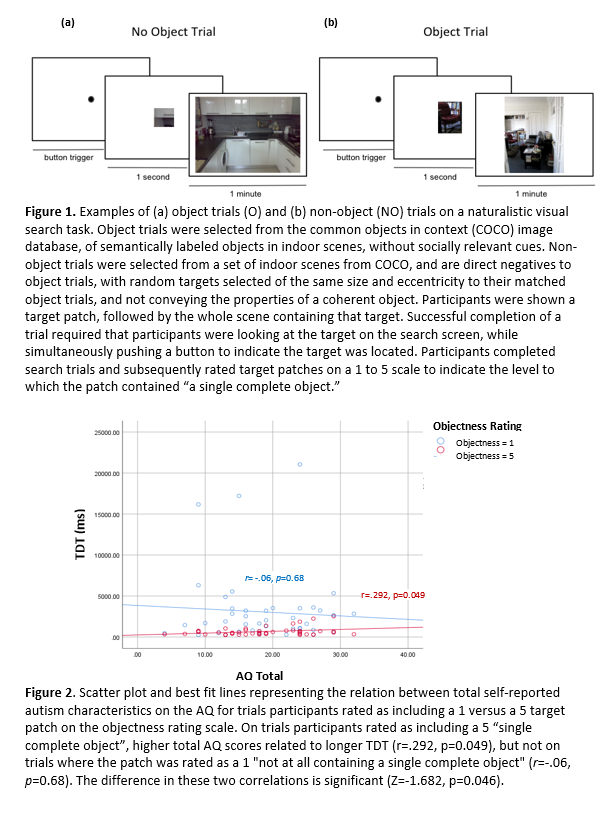