Methods: Data regarding 107 females were selected from a database of clinical evaluations conducted by licensed clinical psychologists between 2006 and 2017. All individuals had been referred for a clinical ASD evaluation at a tertiary care clinic. (Final sample sizes: 107 for age, 87 for cognitive, 74 for language, and 107 for ADOS comparison) The dependent variable was clinical consensus diagnosis (using the ADOS-G/2, ADI-R, and clinical opinion) with and without comorbid diagnoses (other behavioral, medical, and developmental diagnoses by history and/or direct clinical observation). The sample was split into four groups: ASD-No Comorbidity, Non-ASD-No Comorbidity, ASD-Comorbidity, and Non-ASD-Comorbidity. Independent variables included age at evaluation, language score (using the CELF 3/4, CELFP-2, OWLS, and PLS 3/4/5), ADOS comparison score, and cognitive score (using the WISC-IV, Leiter-R, DAS, DAS II standard total IQ scores or ABAS Parent or Teacher forms, AGS Self-Help Profile, and Vineland I/II).

Results: The mean age at evaluation of the sample was 5.76 (SD = 2.81). The sample consisted of 49.5% white, 31.8% non-white, and 18.7% unknown. Overall, 54% of the sample had no other reported diagnoses. The mean cognitive score for the sample was 74.28 (SD = 18.05), while the mean language score was 67.66 (SD = 20.18). No significant group differences were found except that girls diagnosed with ASD received higher ADOS comparison scores than those with non-ASD for both single diagnosis and comorbidity groups (see Table 1 and Table 2). When compared between ASD and non-ASD without sorting for comorbidity, only ADOS comparison score was significant (p<0.001).

Conclusions: Results suggest that the ADOS comparison score was the most distinguishing feature within this referred sample of females. Furthermore, girls with multiple diagnoses did not present differently in terms of language and cognitive ability compared to girls with a single diagnosis. This may be due to low power given the small sample size, as means indicate girls with ASD may have lower cognitive and language standard scores in the comorbid and no-comorbid groups. The overall cognitive and language skills mean, while not significant between groups, was considered below average indicating significant deficits. This suggests that females with moderate to mild deficits may be missed and not referred for evaluation. It is important to understand the characteristics of this population and recruit more females with ASD for research, as it may help in identifying females earlier, and correctly identifying females with and without developmental concerns using high quality assessments and shortening waitlists. 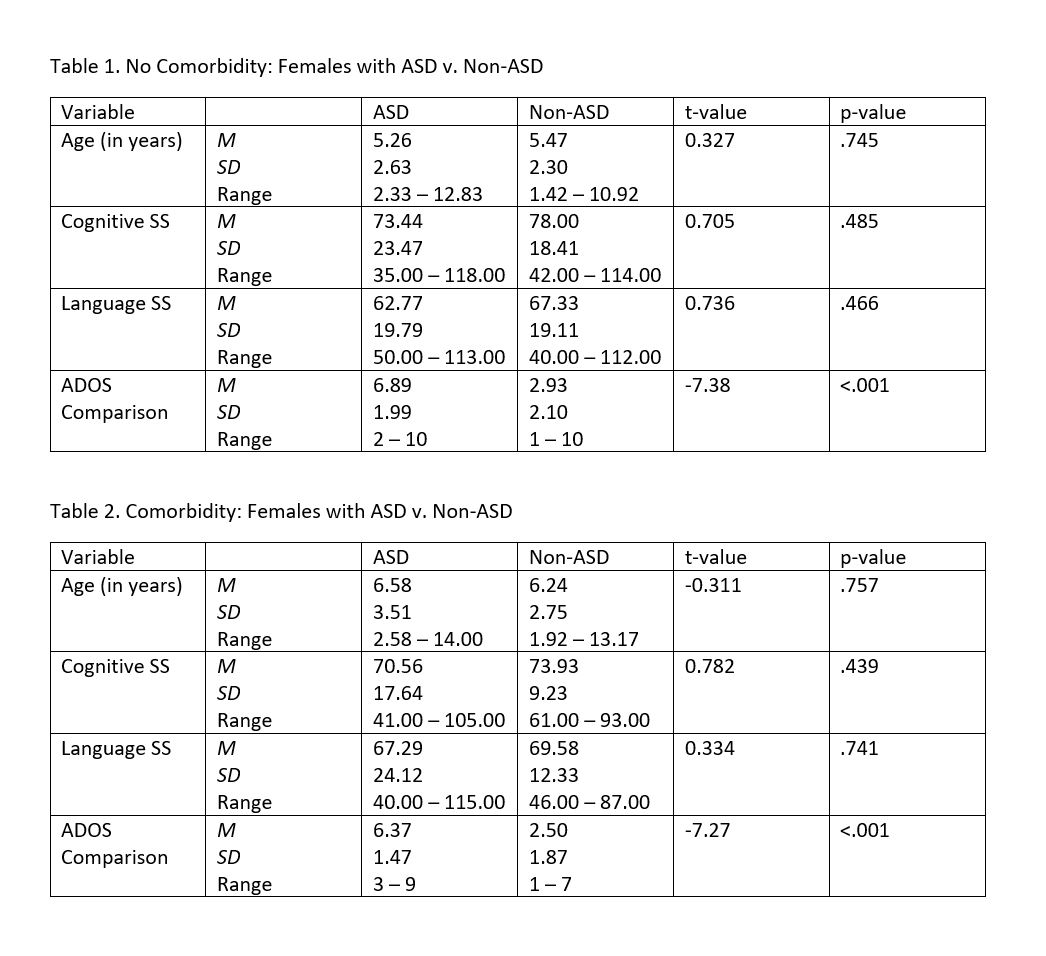