Poster Presentation
Room: 710 (Palais des congres de Montreal)
D. L. Williams1, M. Siegel2 and C. A. Mazefsky3, (1)Communication Sciences and Disorders, Pennsylvania State University, University Park, PA, (2)Maine Medical Center - Tufts School of Medicine, Westbrook, ME, (3)Department of Psychiatry, University of Pittsburgh School of Medicine, Pittsburgh, PA
Background: In previous work, we found that, contrary to expectations, verbal ability was not strongly related to the severity of problem behaviors in pediatric psychiatric inpatients with autism spectrum disorders (ASD) (Williams, Siegel, & Mazefsky, 2017). The potential effect of augmentative/alternative communication (AAC) use by the individuals with ASD who were minimally verbal (MV) remained an unanswered question. Other research has suggested that introducing a form of AAC such as Picture Exchange Communication System (PECS; Frost & Bondy 2002) or a speech-generating device may be associated with a decrease in the occurrence of problem behaviors for MV children with ASD (Ganz et al. 2009; Mirenda 2003).

Objectives: This is an initial descriptive report of AAC use in our population of pediatric psychiatric inpatients with ASD, adding to the limited information available on the proportion of youth with ASD who use AAC, the forms used, and the user characteristics.

Methods: A questionnaire, adapted from one by Tager-Flusberg and colleagues, was used to gather information from family members about AAC use, the verbal abilities, and communicative functions of 641 pediatric psychiatric inpatients with ASD. Receptive vocabulary was measured with the Peabody Picture Vocabulary Test-4 (Dunn & Dunn, 2007) for a subset of 479 inpatients.

Conclusions: The percentage who use AAC in this inpatient population is consistent with previously reported estimates of AAC use in other ASD samples (Wodka et al., 2013). Consistent with other reports, this inpatient population primarily used AAC for the basic communicative functions of expressing wants/needs and requesting (Ganz et al., 2012). Future research will use information from the AAC questionnaire to examine the relationship between the ability to communicate and severity of problem behaviors in this population. 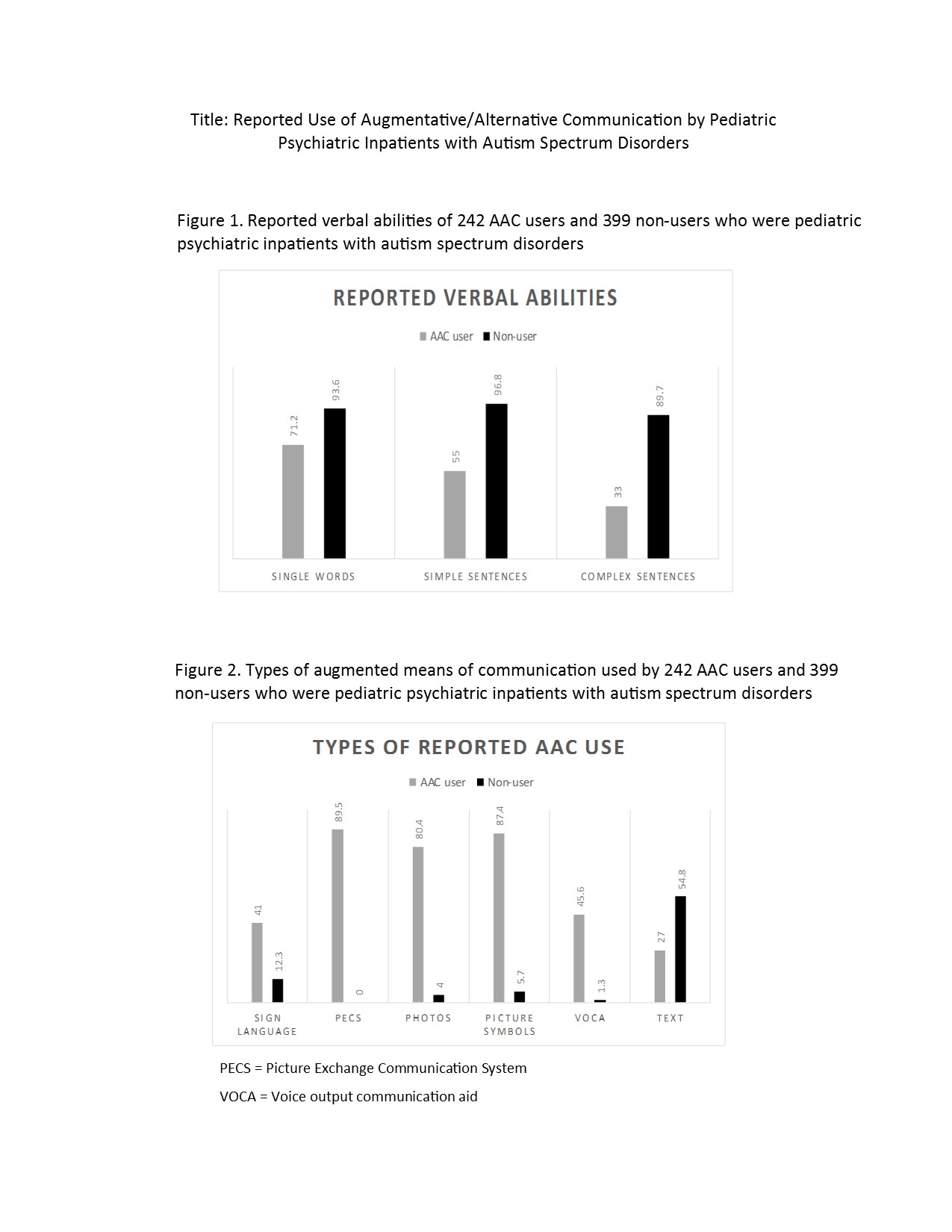