Objectives: To examine whether items on the First Years Inventory (FYI) version 3.1, a parent questionnaire designed to assess behaviors in 12-month-olds that suggest risk for a later diagnosis of autism, function differently with infants of different age, sex, and prematurity status.

Methods: A community sample of 6,395 parents who had a child 8 to 16 months of age completed the FYI consisting of 69 items, which can be classified into two domains: Social Communication (SC) or Sensory Regulatory Functioning (SR). Differential Item Functioning (DIF) as an indicator of measurement invariance was assessed using a hybrid ordinal regression-item response theory (IRT) method across age (8-10, 11-13, 14-16 months), sex (male or female) and prematurity status (<36 or ≥36 gestational weeks) groups, separately for each domain. The cumulative impact of DIF on domain scores was evaluated if DIF was detected, where ΔR2 exceeded the thresholds generated through Monte Carlo simulations of DIF-free samples.

Conclusions: Results suggest significant differences in the responses of parents with infants of different ages, particularly for behaviors related to social communication. The SC domain scores were overestimated if DIF by age was not accounted for in the younger group (8-10 months). Furthermore, the level of overestimation increased as children showed less actual risks in social communication. In contrast, there was an underestimation of SC scores for the older groups (11-13 and 14-16 months), which became more significant as children showed more actual risks in social communication. On the other hand, the item functioning was found to be invariant by sex and prematurity status for both domains. The findings revealed the potential utility of the FYI with very young infants, especially in consideration of the developmental effects on social communication. 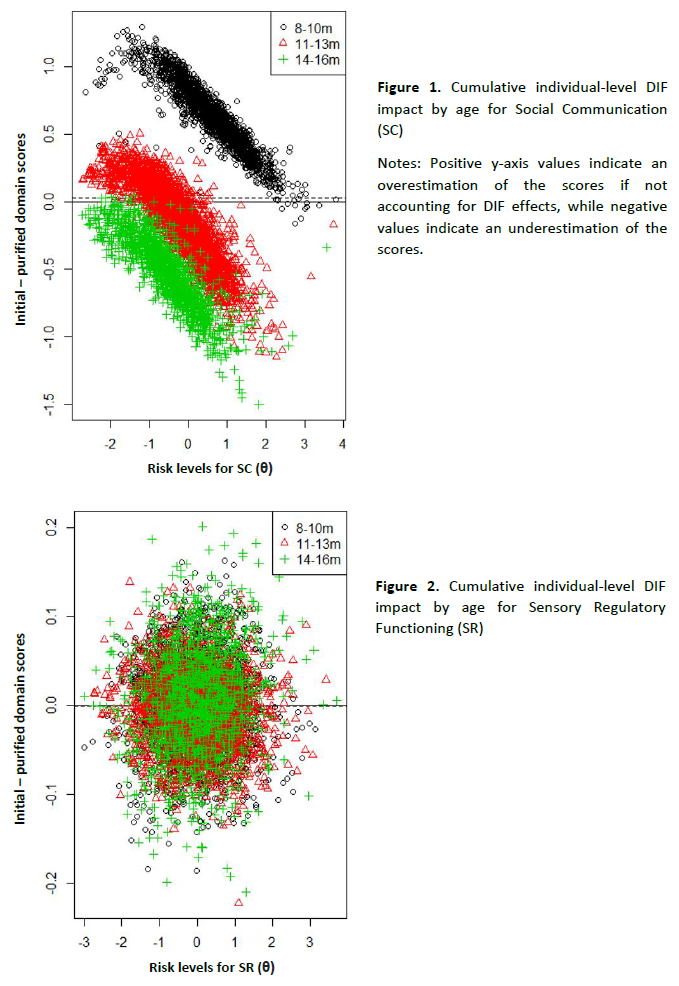