31293
Factors Associated with Missed ASD Identification Among Children in Colorado

Poster Presentation
Room: 710 (Palais des congres de Montreal)
T. L. Hill1, T. C. White2, B. Harris3, C. Robinson Rosenberg4 and L. Anthony5, (1)Pediatric Mental Health Institute, Children's Hospital, Colorado, Aurora, CO, (2)Center for Health and Environmental Data, Colorado Department of Public Health and Environment, Denver, CO, (3)Department of Pediatrics, University of Colorado, Denver, CO, (4)University of Colorado / JFK Partners, Aurora, CO, (5)University of Colorado, Denver, Aurora, CO
Background: One in 72 8-year-old children were identified with autism spectrum disorder (ASD) in 2014 by the Colorado Autism and Developmental Disabilities Monitoring (ADDM) Project as part of the Centers for Disease Control and Prevention’s ADDM Network – a population-based surveillance system of ASD. Of the children identified with ASD in Colorado in 2014, 42% did not have a documented ASD diagnosis in their education and/or health records, indicating that a significant number of children with ASD in Colorado may not be receiving optimal intervention services. Although several factors (e.g., symptom severity) have been identified as correlates of delayed or missed ASD diagnoses (Daniels & Mandell, 2014), it is unclear what factors are associated with the disparities in the identification of children with ASD in Colorado.

Objectives: (1) To describe and compare the sociodemographic and clinical profiles of children identified with ASD through the Colorado ADDM Project who did and did not have a previous ASD diagnosis. (2) To identify factors associated with missed ASD identification among children in Colorado.

Methods: The current study analyzed data collected by the Colorado ADDM site for the 2014 surveillance year (the most current data available). Our sample included 562 8-year-old children who resided in Colorado in 2014 and met the ADDM Network ASD case definition. Children were grouped according to whether they had a previous ASD diagnosis (educational or clinical). Latent class analysis (LCA) was used to identify distinct classes of 8-year-olds among the two groups of children (i.e., those with and without a previous ASD diagnosis). All analyses controlled for relevant child characteristics.

Conclusions: With the exception of a documented social and/or language delay prior to the age of three, the two groups of children (i.e., those with and without a previous ASD diagnosis) identified with ASD in 2014 through the Colorado ADDM Project presented with similar patterns of ASD related features, suggesting that ASD evaluation practices may be related to missed ASD diagnoses among children in Colorado. Notably, an income disparity was observed in the latent class membership of children who had a previous ASD diagnosis. 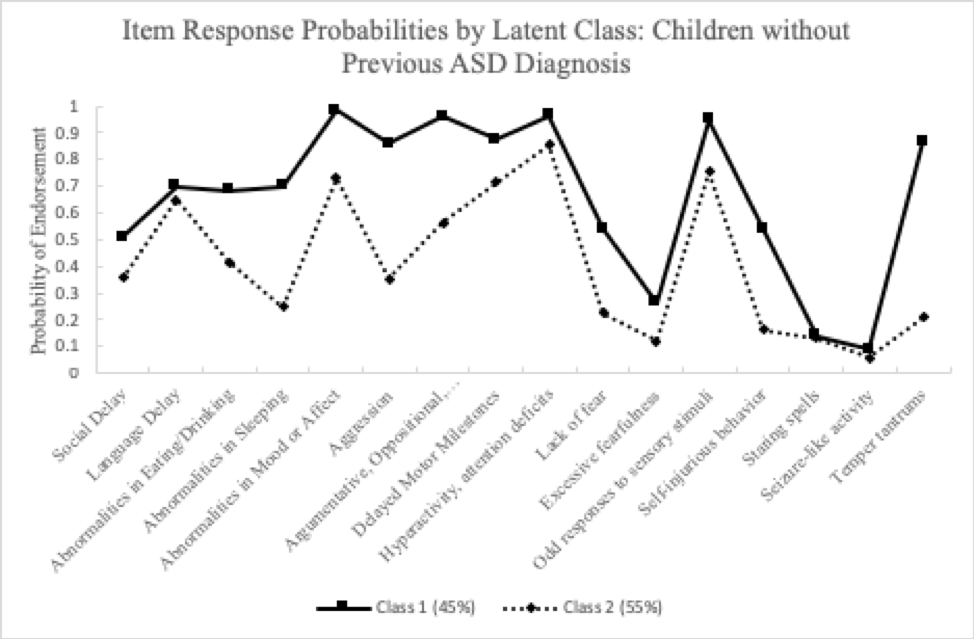