31381
Local and Global Processing in Adults with Autism: Relation between Narrative and Perceptual Abilities

Previous studies have shown that individuals with autism spectrum disorder (ASD) tend to structure their narrative around details rather than on global events (Barnes, & Baron-Cohen, 2012; Diehl, Bennetto & Young, 2006; Jolliffe & Baron-Cohen, 2000; Rumpf et al., 2012). Weak Central Coherence or Enhanced Perceptual Functioning are often invoked to explain these results, the core idea being that ASD individuals display a reduced influence of global information and enhanced focus on detail (Happé & Frith, 2006; Mottron et al, 2006). Yet, this relationship between narrative and perceptual abilities has not been experimentally tested.

We explore the relation between local/global processing in narrative and perceptual tasks in adults with ASD compared to NT controls.

We analyse the story grammar (number of gist events vs. irrelevant details) in the online storytelling, based on the picture book ‘Tuesday’ from the ADOS-2. Our participants are 20 adults with ASD and 20 controls matched on age (mean=28), sex (14 males, 6 females), verbal IQ (mean=111), perceptual IQ (mean=106) and total IQ (mean=108). We also measure reaction times (RTs) and accuracy on four sub-tasks of the WAIS-V battery: Block Design, Picture Completion, Similarities and on a Block Design segmented task. Finally, participants’ mental inhibition is measured with the Stroop interference test.

There is a strong Group effect on gist and details enunciation in narratives, with ASD participants verbalizing less gist, and more details in their narratives than NT participants.

There are no Group effects on RTs in Block design or on the effect of stimuli segmentation. However, there is a strong effect of Block Design RT on gist enunciation (but no interaction with Group). The faster participants are on this task, the more gist they provide in their narrative.

There is a significant effect of Picture Completion RT, and a strong interaction RT X Group effect on details enunciation. The faster ASD participants are to detect missing details on a figurative picture, the more details they tended to provide in their narrative. 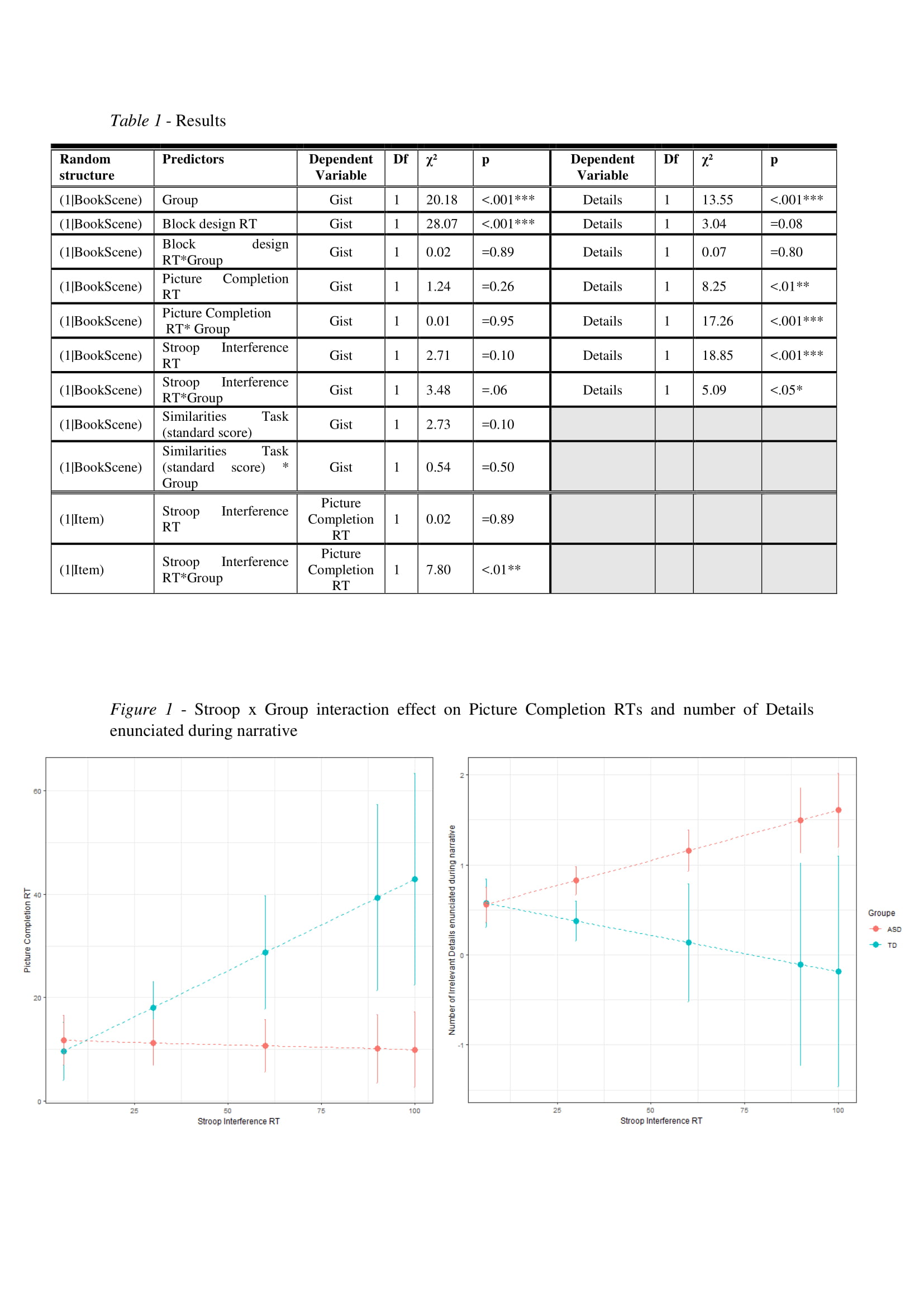