Poster Presentation
Room: 710 (Palais des congres de Montreal)
F. Li1, A. M. Gonzalez Barrero2, H. Goad3 and A. Nadig1, (1)School of Communication Sciences and Disorders, McGill University, Montreal, QC, Canada, (2)Department of Psychology, Concordia University, Montreal, QC, Canada, (3)Department of Linguistics, McGill University, Montreal, QC, Canada
Background: Language impairment (LI) is observed in 40-60% of children with ASD (Pickles et al., 2014). Sentence Repetition tests (SR) are quick and can reliably identify LI (Archibald et al., 2009). However, SR tests involve repetition of linguistic content and as such do not work well with multilingually-exposed children, since they may appear to have LI when in fact they just have reduced exposure to the language of testing. Nonword repetition (NWR) tests can also reliably identify LI, but they employ nonwords and are less influenced by language exposure (Thordardottir & Brandeker, 2013). No NWR task exists with stimuli that are phonotactically permissible in multiple languages. In this context, we developed a Multilingual Non-Word Repetition (ML-NWR) test for administration in English, French and Spanish, and applied it to a large sample of children with ASD or typical (TYP) development.

Methods: Data from 88 participants (38 with ASD) were analyzed. Participants varied in age (5-10 years), L1 (English or French), amount of exposure to that L1, presence or absence of ASD, and presence or absence of LI (among the children with ASD). Participants were administered the ML-NWR test and a SR test (from the CELF-4 or French Canadian version) in their L1 and, for bilinguals, their L2. A subset of 12 participants (seven with ASD) was also administered the Children’s Test of Nonword Repetition (CNRep). LI was defined as SR score less than or equal to 1 SD below the mean along with prior documentation of structural-language difficulties. In the ML-NWR test, 27 stimuli of increasing length and phonological complexity were administered live by an examiner. Examiner and participant productions were transcribed in IPA by two independent listeners who were blind to participant LI status.

Conclusions: The ML-NWR test was less influenced by amount of language exposure than a SR task. It displayed a good level of utility as a screener for LI in multilingually exposed children with ASD. Ongoing analyses will compare stability of LI detection across L1 and L2 in bilingual participants. 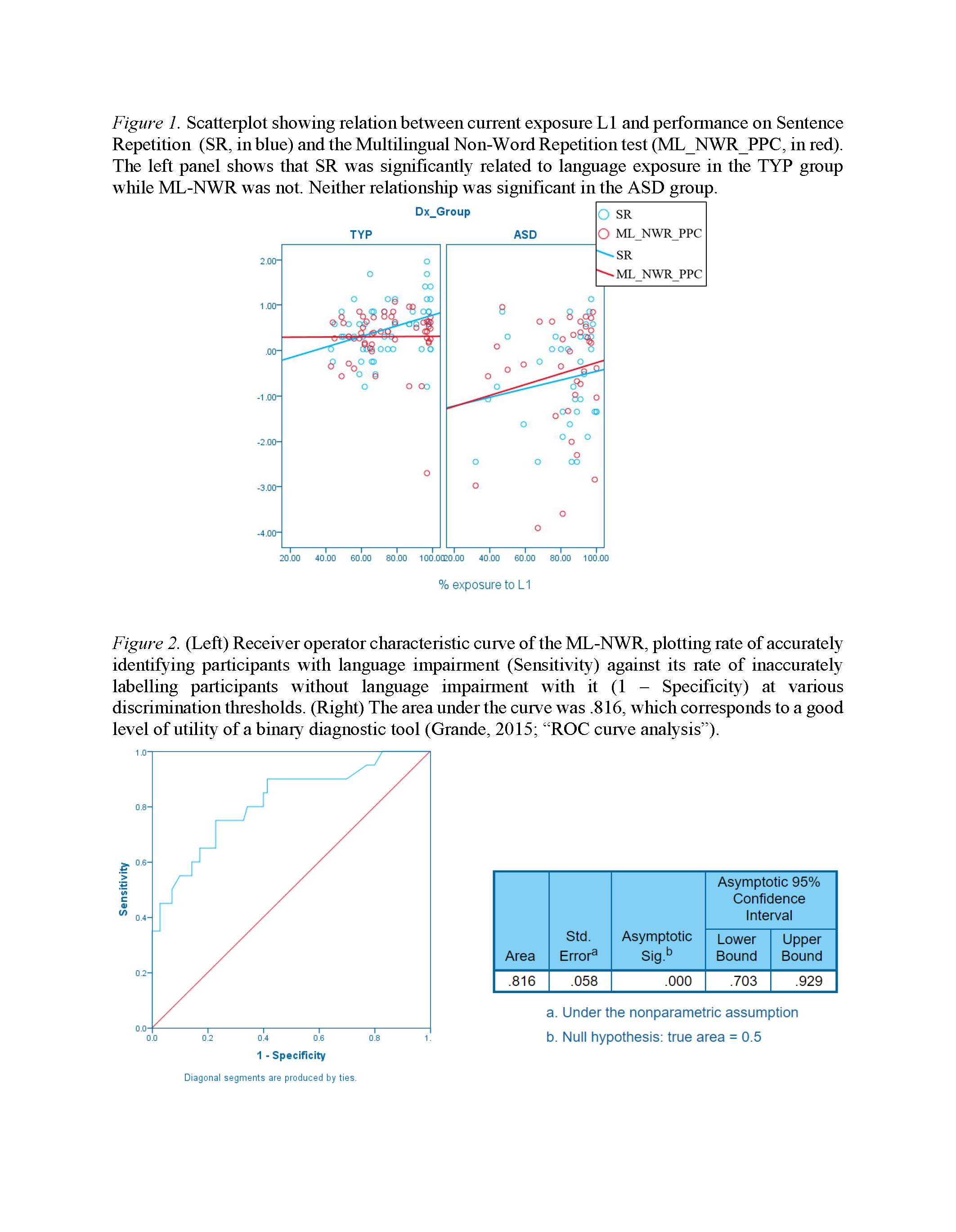