We focused on interactions involving parent questions directed toward their child. Child-directed questions are often pedagogical, ostensibly designed to teach the child about the world, social interaction, and language itself (Snow, 1972; Yu, Bonawitz, & Shafto, 2017). When answers to questions are known to the adults who pose them (i.e., known-answer questions; Grosse & Tomasello, 2012; Schegloff, 2007), they culminate in question-response-evaluation (QRE) sequences. These sequences have been examined classroom contexts (e.g., Waring, 2009), but few studies have examined these sequences in family interactions that involve children with ASD.

Objectives: to determine (a) the question formats that were used to launch QRE sequences, (b) the types of third-turn evaluations used to close these sequences, and (c) the larger action trajectories in which the QRE sequences were embedded.

Methods: We used Conversation Analysis, a micro-analytic approach to examining interaction that focuses on the sequence organization of talk. Parents were given a video camera, and instructed to turn it on during times of the day that family members engaged in routine interactions. We focused on one family in our data corpus, comprised of ~4 hours of recordings. Recordings were transcribed in Spanish, and then translated into English. After an initial pass through the dataset, we developed a code book to identify segments of transcript that included the provision of known-answer questions. These segments were then coded to determine the question format, the evaluation format, and the action trajectory within which the QRE sequence was embedded.

Results: Known-answer questions were posed using several question formats, with q-word (who, what, why, etc.) questions being the most prevalent. We also found that parents formatted evaluations in a variety of ways; by initiating repair, repeating the child’s utterance to confirm the acceptability of the response, moving to the next question is a series of topically organized questions, and by offering affirmative tokens (e.g., yes) or evaluative phrases (e.g., wow, that’s great). In terms of action trajectories, our analyses showed that QRE sequences were not designed solely to test child knowledge. Instead, they worked to: (a) repair prior responses, (b) move play routines forward, and (c) launch an extended, topically connected series of questions. See Table 1 for descriptions and examples.

Conclusions: This study offers a characterization of QRE routines in a Spanish-English, immigrant family with a child with autism. Our findings suggest that QRE sequences were a rich interactional resource for the child and his parents, and could potentially be a space for maximizing high level engagement to encourage social-communication development. 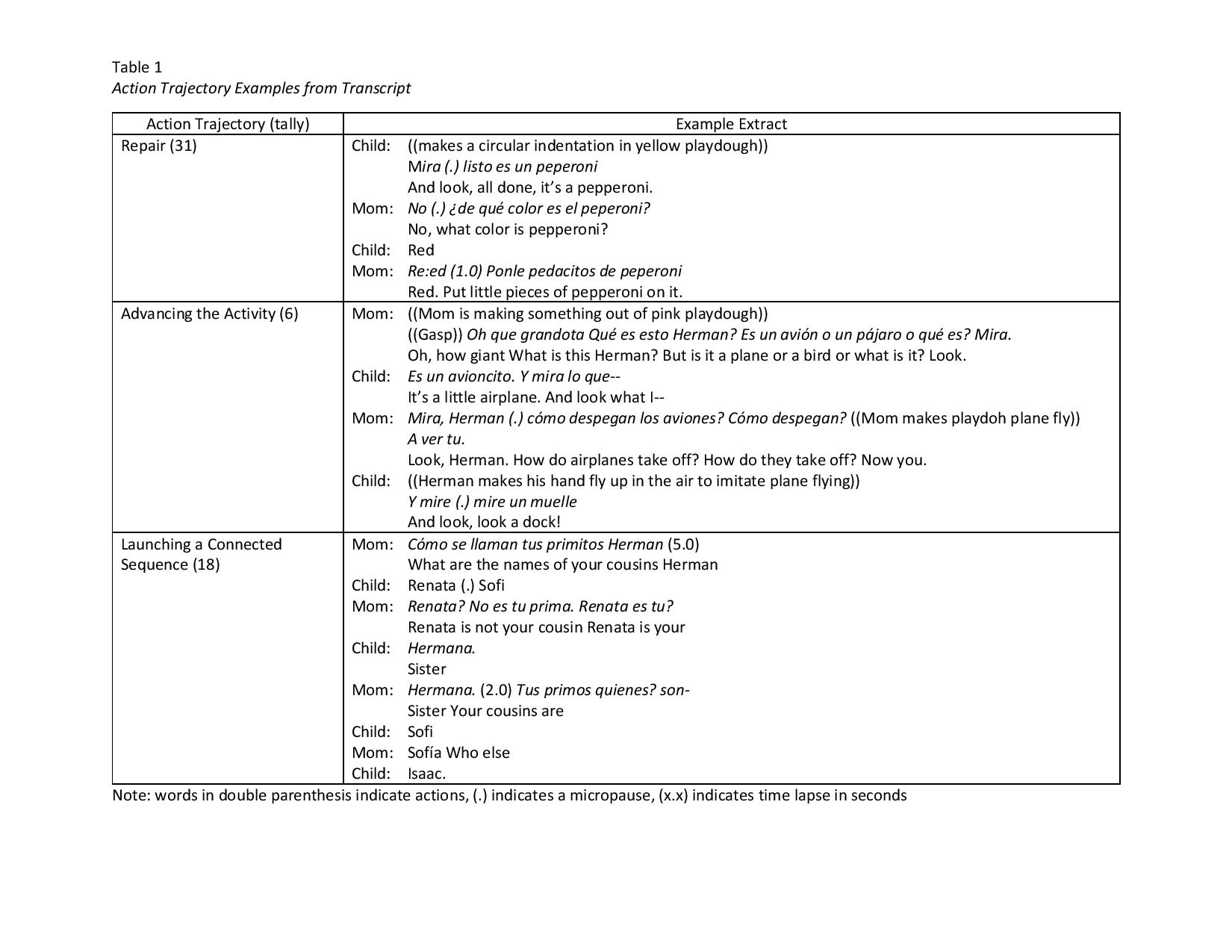