94% of children with ASD exhibit challenging behaviors (CBs; Jang et al., 2010). CBs impact the wellbeing of parents (Davis & Carter, 2008; Hayes & Watson, 2012) and burnout rates in teachers (Hastings & Brown, 2002). A greater understanding of situations in which CBs commonly occur would allow for the development of tailored, situation-specific interventions, helping to reduce parent stress and teacher burnout. However, there is little information on contexts where CBs are most prevalent and most severe from the perspectives of parents and teachers. Additionally, many studies that examine CBs are cross-sectional (Lecavalier et al., 2006), with few examining CBs longitudinally.

1) Determine in which situations parents and teachers: a) most commonly report child CBs and b) report high severity CBs. 2) Examine change in parent-reported CBs over 12 months.

This study used data from a social communication RCT collected across three timepoints (entry, exit, 6-month follow-up). Preschoolers (n=145) using <30 spontaneous words at entry received 6 months of behavioral intervention (JASPER or DTT). At each timepoint parents completed the Home Situations Questionnaire-PDD (HSQ), which assesses behavioral noncompliance in everyday contexts. Parents were asked to report whether their child exhibits CBs across a variety of settings, and if so, how severe they perceive those behaviors to be (1=mild to 9=severe). Teachers completed the School Situations Questionnaire (SSQ), which assesses child noncompliance within the school context.

Across all three timepoints, parents reported that children most frequently displayed CBs while attending group events, playing with other children, transitioning between activities, and being out in public places (Table 1). They reported that the most severe CBs occurred when children were taken to appointments, attended group events, when repetitive behavior was interrupted, and when out in public places (Table 1).

Linear mixed models were used to investigate change in parent-reported CBs over time (entry, exit, follow-up). Analyses controlled for treatment group, ADOS total score, chronological age, and Mullen visual reception scores. The treatment x time interaction was not significant and was removed from subsequent analyses. HSQ severity differed significantly from entry to exit (B=-.32, p=.014), but not from entry to follow-up.

These results provide rationale for targeting of CBs in behavioral interventions for preschoolers with ASD, illustrating in which situations parents and teachers may benefit from supports. Parents most commonly endorsed severe CBs during routine changes and in social situations, while teachers reported that CBs occurred during lesson times. Parents and teachers may benefit from training in managing CBs around these specific situations.

Results also indicate that CBs reduce over time with intervention, but the reduction is not maintained. This finding suggests that parents may benefit from intervention booster sessions once social communication interventions have ended to help maintain the reduction in CB severity. 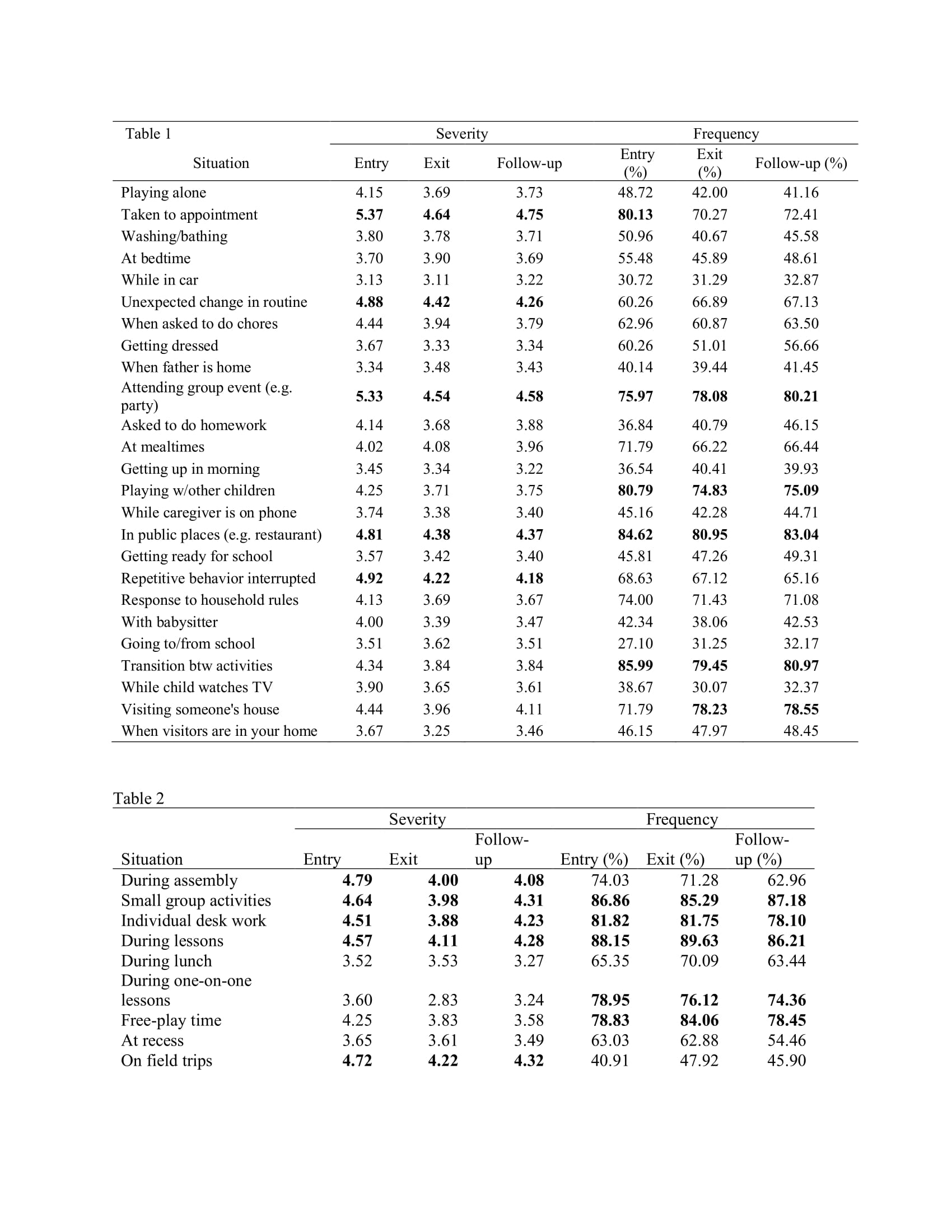