Autism Spectrum Disorder (ASD) is characterized by difficulty with social communication, including understanding pitch in spoken language (O’Connor, 2012), despite average or above average musical pitch processing skills (Bonnel et al., 2003; Heaton, 2003, 2005). Impaired linguistic but enhanced musical pitch processing has also been found in tone language speakers with ASD, such as Mandarin (Jiang et al., 2015). It remains unclear whether pitch production would also differ between music and language in ASD.

This study investigates pitch and duration matching in speech and song imitation of individuals with ASD and typically developing (TD) controls, who are native speakers of a language with or without lexical tone: Cantonese and English. This shows the effect of linguistic pitch expertise on pitch production in ASD and highlights differences in pitch processing between domains of speech and song among ASD individuals.

Preliminary data were collected from 20 English speakers (11 ASD and 9 TD) and 10 Cantonese speakers (7 ASD and 3 TD). Participants listened to and imitated 48 (English) or 40 (Cantonese) sung and spoken sentences. Imitation recordings were analysed in Praat to extract median pitch and duration of each syllable rhyme and compared to model production. Absolute pitch and duration deviations were averaged across all syllables to obtain imitation accuracy for each sentence (Liu et al., 2013).

Linear mixed effects models were fitted for pitch and duration deviation separately for English and Cantonese speakers, with diagnostic group (ASD vs. TD) and domain (speech vs. song) as fixed effects and participants and stimuli as random effects.

For English, there was a significant main effect of domain on pitch and duration deviation, as both ASD and TD groups imitated song pitch better than speech pitch but speech duration better than song duration. A significant group x domain interaction was found for pitch deviation, as the TD group imitated speech pitch (but not song pitch) more accurately than the ASD group.

For Cantonese, there was a significant main effect of domain and a significant group x domain interaction on pitch and duration deviation. Song pitch was imitated more accurately than spoken pitch, and this advantage was enhanced among TD as opposed to ASD participants. Speech duration was imitated more accurately than song duration, and this advantage was enhanced among ASD as opposed to TD participants.

Overall, results show that both ASD and TD groups imitated song pitch more accurately than speech pitch, in both English and Cantonese, and all groups imitated speech duration more accurately than song duration. Consistent with previous studies on American English and Mandarin speakers (Liu et al., 2013; Mantell & Pfordresher, 2013), these findings are expected since pitch precision in music is required and duration accuracy in speech is crucial. 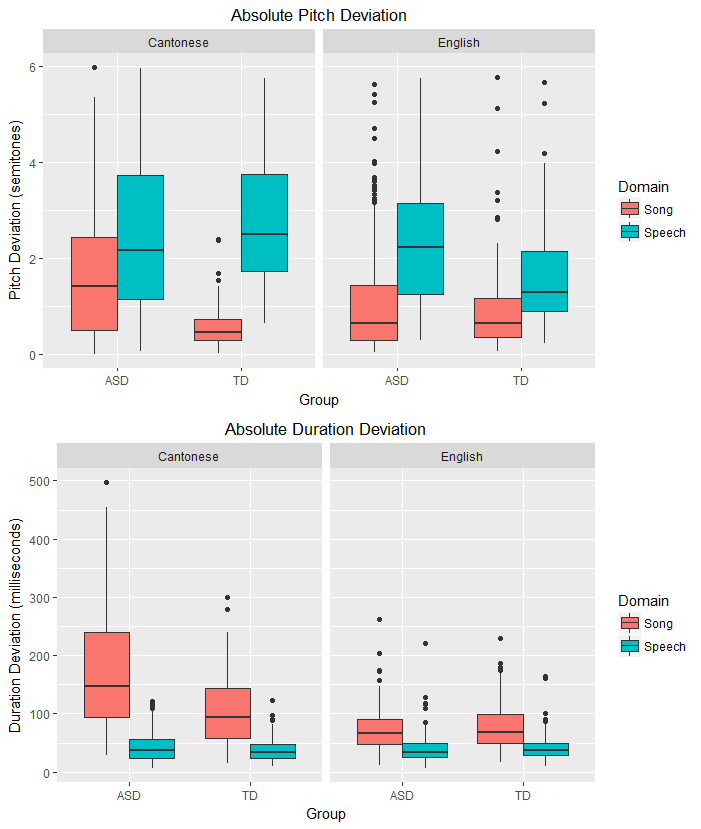