Objectives: The present study was driven by two goals: 1) identify the patterns of AB for socio-emotional information and how they relate to traits associated with the diagnostic features of autism, and 2) test whether any such relationships are mediated by anxiety.

Methods: Participants included typically-developed individuals (N=33, data collection ongoing) who completed a well-established dot-probe paradigm, designed to assess AB for socio-emotional cues (Figure 1a). Two images of faces were briefly presented, one featuring a neutral expression and one featuring an emotional expression. A visual target then appeared in the previous location of one image, and participants indicated at which location the target occurred. Faster responses to targets presented in the previously socio-emotional cued location indicated AB for that domain. Eye-tracking was used as a concurrent measure of AB for emotional expressions. Participants completed questionnaires reporting the presence and degree of various ASD-related social (Social Responsiveness Scale; SRS-2), RRB (Repetitive Behaviors Questionnaire; RBQ), and sensory (Sensory Profile) traits, as well as a measure of anxiety (the adult-adapted Spence’s Children’s Anxiety Scale). AB responses were then correlated with the level of ASD-related traits for each measure, as well as anxiety. Mediation analyses were conducted to assess the role of anxiety in the relationship between AB and ASD traits.

Results: Positive correlations were found between AB and scores on the SP-2, RBQ, and SRS (all r-values>0.30, all p-values<0.05). Anxiety significantly correlated with AB (r=0.44, p=0.012), as well as with the three measures of ASD traits (all P-values<0.05). Regression analyses were used to test the hypothesis that anxiety mediated the effect of AB and ASD-related symptom outcomes. Regression analyses and the associated Sobel’s tests revealed anxiety did not mediate the relationship between AB and ASD-related symptom outcomes for scores on the SRS (S=2.56, p=0.01, Figure 1b), but anxiety did mediate the relationship for RBQ (S=1.14, p=0.254, Figure 1c) and SP-2 scores (S=1.92, p=0.054, Figure 1d). 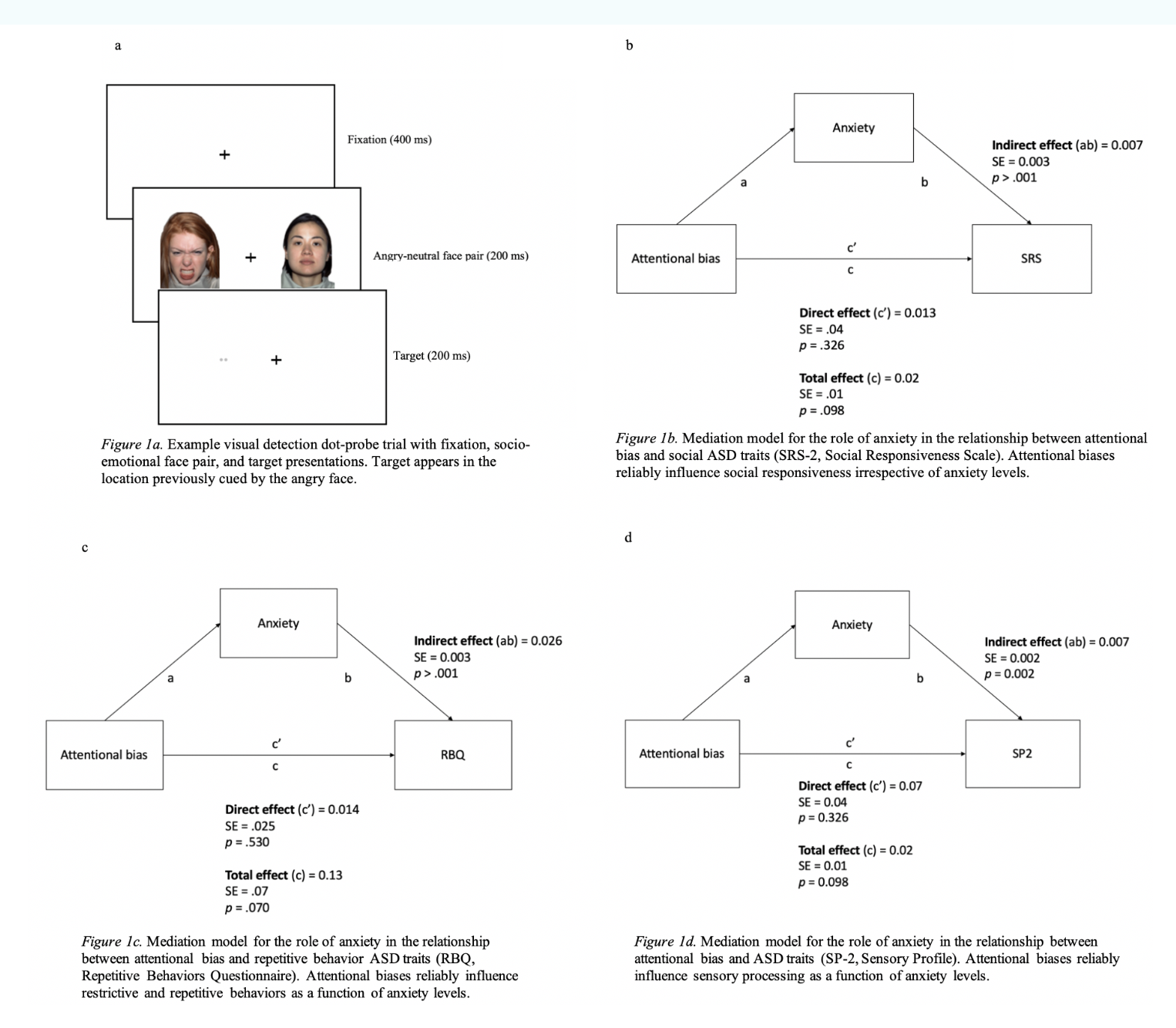