Poster Presentation
Room: 710 (Palais des congres de Montreal)
S. K. Markert1, A. Klin2, C. Klaiman2, W. Jones2 and S. Shultz2, (1)Department of Pediatrics, Marcus Autism Center, Children's Healthcare of Atlanta & Emory School of Medicine, Atlanta, GA, (2)Marcus Autism Center, Children's Healthcare of Atlanta and Emory University School of Medicine, Atlanta, GA
Background: Throughout the first year of life, infants attain and refine a myriad of skills in both motor and social communication domains. In typically-developing (TD) infants, the attainment of motor milestones in particular transforms the ways in which infants are able to interact with their surroundings, affording them a wide range of new experiences that are fundamental to the emergence of social communication skills. In children with ASD, a small number of studies have begun to address how motor development relates to communication development, but have thus far focused only on the onset of walking. Sit milestone attainment relates to increases in social communication in TD infants, but remains largely unaddressed in infants with ASD. The present study will be the first to investigate this relationship in infants later diagnosed with ASD.

Methods: 81 age-matched infants (38 ASD; 43 TD) were administered the Communication and Symbolic Behavior Scales (CSBS) at 9 and 12 months of age. A parent caregiver questionnaire (PCQ) was completed by a primary caregiver, and the age at which each infant first sat without support was collected. Trajectories were modeled for social communication scores on the CSBS across the two time points using (a) chronological age and (b) an adjusted age based on age at attainment of sitting (Figure 1). "Early" and "late" sitters were identified relative to group median sit-onset age, and scores were plotted and compared for each group. Within-group analyses were run to test for correlations between sit onset and social communication scores at 9 and 12 months.

Conclusions: This study reveals a relationship between the attainment of the sit milestone and trajectories of social communication in children with ASD, such that adjusted age based on sit onset better models growth in social communication than chronological age alone. In addition, infants who sit earlier exhibit stronger social communication at 9 months, suggesting that sitting affords these infants experiences that may have positive cascading effects on communication development. These findings highlight the dynamic nature of co-occurring and interrelated domains of development in the first year of life. Knowledge of how early motor milestones relate to emerging communication skills in children with ASD can provide insight into mechanisms that impact the unfolding of the social-developmental disorders, and in turn may aid development of timely and effective interventions to support communicative growth in this vulnerable population. 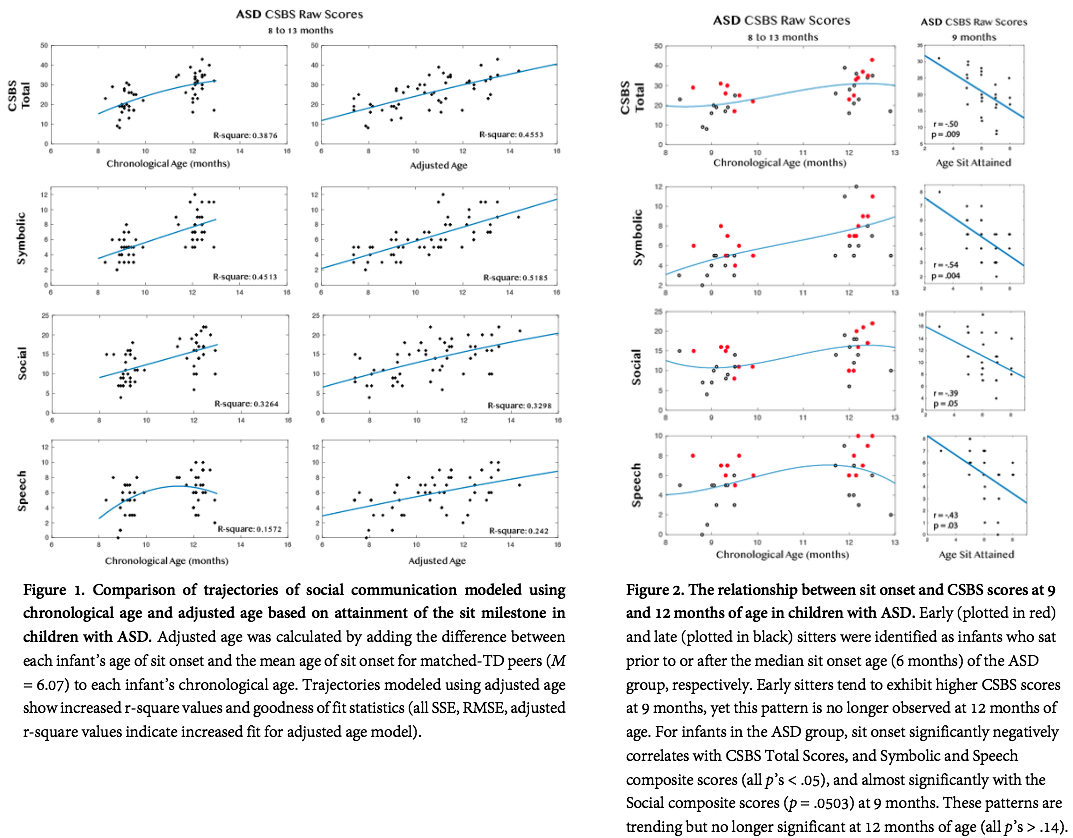