32212
Literacy in Minimally Verbal Young Adults with ASD Revealed By Eye Movements but Not Pointing: A Pilot Study

Poster Presentation
Room: 710 (Palais des congres de Montreal)
K. Ellert1, N. Shefer - Kaufmann2 and Y. S. Bonneh3, (1)School of Optometry and Vision Science, Bar-Ilan University, Ramat-Gan, Israel, (2)Clalit institute for child development, Tel-Aviv, Israel, (3)School of Optometry and Vision Science, Bar-Ilan University, Ramat Gan, Israel
Background: Autistic children and adults with little or no spoken language, labeled 'minimally-verbal' (MV), are typically judged 'low-functioning' or cognitively impaired, after failing the conventional assessments. However, it is yet unclear whether these failures reflect a true cognitive impairment, or alternatively a severe deficit in behavioral expressions of cognitive skills. One hypothesis, inspired by case descriptions and the similarity to Catatonia, suggests an "output problem" or a core action-control deficit for voluntary behavior, which results in a significant gap between the observed and actual cognition. In the current pilot study, we investigate this hypothesis by analyzing small eye-movements, possibly unintentional or reflexive that may bypass the action-control deficit.

Methods: Young adults with MV-ASD (N=12, 2 females, ages 15-24, all with less than 30 communicative words) were tested on a novel "cued looking" paradigm (adaptation of "looking-while-listening"; Fernald et. al., (2008)). Participants watched a sequence of stimuli while their eyes were tracked (Tobii tracker, short calibration), and their position of gaze was superimposed on the stimuli to attract attention. In each trial, a text word was presented at fixation (1s), followed by a pair of familiar objects pictures (fruits, animals, vehicles etc., 20 pairs) presented (1s) side by side (~6 deg each side), with next trial following after 800ms. There were 4 short runs (<1 min) repeated 3-6 times in random order with breaks. In a second experiment, the written words were replaced by recorded words. In a third (reading) and fourth (listening) experiments, the same pictures and text were used on 20 cards to measure performance via pointing. We analyzed the lateralization of the eye-gaze according to target side, the time course of correct gaze side, saccade direction and rate modulation. Statistics were obtained via non-parametric permutation tests.

Results: 9 of the 12 MV participants showed a significant effect of reading as reflected by correct lateralization estimates of 65-85% (average 75%), significant from 250-800ms post stimulus onset (average 350ms, p=0.001). In comparison, a control group of young adults (n=10) showed correct lateralization of 70-96% (average 85%). Overall, the MVs made smaller lateral eye movements (3 vs 6 deg.), were slower to start the movement (350ms vs 250ms), had a smaller peak of lateralized saccades and were less accurate (75% vs. 85%, implying ~90% of normal performance). The results in experiment 2 (vocal words) were similar for the 9 MV participants. In a striking contrast, 8 of the 9 MVs who showed significant reading with the eyes were at chance or near chance (50-70%, 59% on average, compared to 100% of controls).

Conclusions: Our pilot results from a small group of 12 young adults with MV-ASD provide the first systematic evidence for reading ability in individuals typically assumed to be severely language and cognitively impaired. The results demonstrate a striking gap between pointing performance and gaze-fixation, which opens the way for uncovering unknown cognitive abilities in people with MV-ASD. 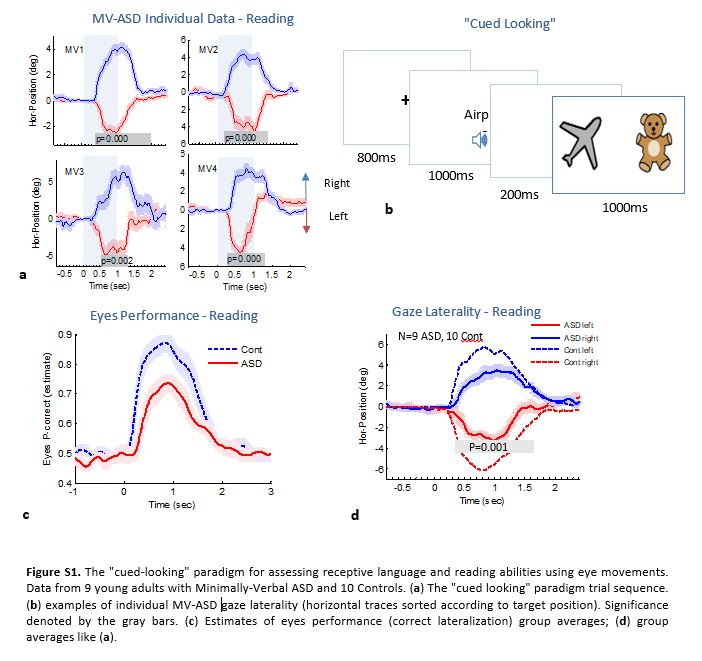