32229
Improving Parent-Provider Communication and Shared Decision-Making for the Early Identification of ASD: A Qualitative Study

There is an average delay of two years between first concerns for Autism Spectrum Disorder (ASD) and diagnosis (Sansoti, Lavik, & Sansosti, 2012). As a diagnosis is necessary to access ASD specialized interventions, many children fail to receive these services before the age of three, when it would be most beneficial to their development (Dawson et al., 2010). Disjointed and inefficient communication between parents and health/service providers could be a contributor to this delay, as many parents report being afraid to express concerns due to fearing judgement, while providers are unsure about how to appropriately bring up or respond to ASD concerns (Ryan & Salisbury, 2012). The principles of shared-decision making can mitigate these issues, but past studies have found the use of such models is difficult due to a lack of clear materials and supports (Shields et al., 2012).

Our aim was to characterize the challenges and facilitators for effective communication between parents and providers about early ASD concerns in order to develop tools to promote shared-decision making.

Twenty-three parents of young children diagnosed with ASD participated in 3 focus groups, 2 conducted in English and 1 in Spanish. Participants answered a series of pre-determined, open-ended questions and prompts related to the diagnostic process and obstacles they encountered accessing services. Focus groups were audio-recorded, transcribed, and coded using the grounded theory approach to find common themes among the participants’ responses. Two independent coders reviewed the transcriptions and inter-coder reliability was reached.

Eight themes were found (underlined; see Table 1). Child characteristics that generated parental concerns included those related to core ASD deficits (e.g., poor eye contact, social interactions) and developmental delays (e.g., language delay). When parents raised the concerns to others (e.g. providers, spouses), their responses ranged from dismissive to disbelieving to affirming. If ASD concerns were raised by others, the delivery was usually gentle, but sometimes poor and unwelcome. Parental reactions when others raised concerns ranged from fear to anger to relief, but all parents generally took action once their providers made recommendations/referrals. Parents’ lacked in-depth prior knowledge of ASD and would use the internet and library to seek information on ASD, which, at times, led to them feeling overwhelmed. Barriers to acting on concerns included providers’ dismissal of concerns, parental hesitation, language and cultural barriers, and issues with the service delivery system (e.g., long diagnostic waitlists), while appropriate referrals, resources, and support/validation from the child’s providers acted as facilitators to acting on concerns. Parents’ recommendations to providers included increased training in ASD, increased sensitivity and responsiveness to parental concerns, and concise, informative written materials about ASD, the diagnostic process, and interventions. 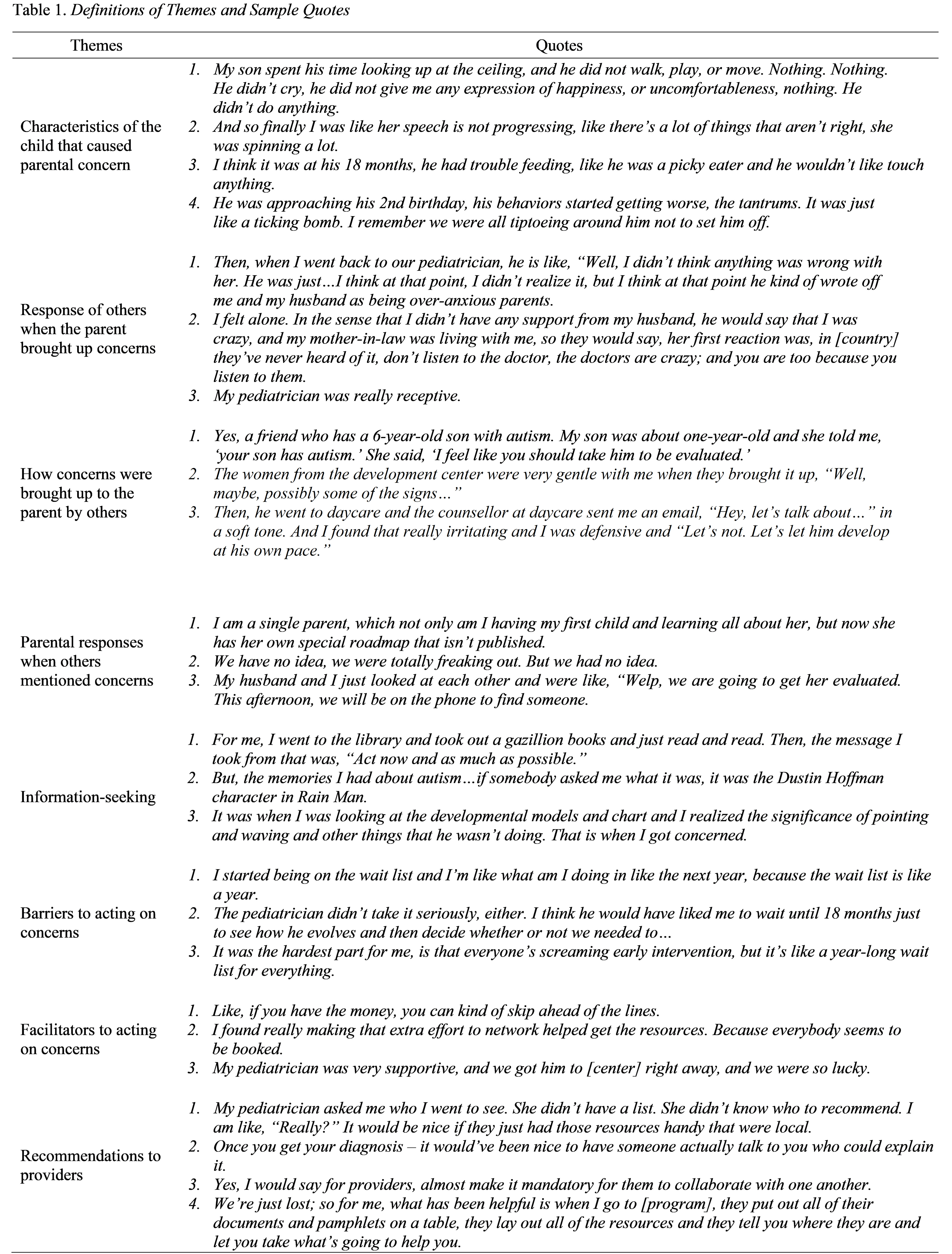