Autism spectrum disorder (ASD) is characterized by deficits in cognitive control (Solomon, Hogeveen, Libero, & Nordahl, 2017). However, recent work has shown that proactive control, defined as preparatory, goal-directed cognitive processing, may be preserved in children with ASD, and its implementation negatively associated with attention problems (Hogeveen, Krug, Elliott, & Solomon, 2018). Proactive control has not yet been investigated in adolescents and young adults with ASD, nor have its associations with anxiety and depression, which are commonly comorbid in ASD (Leyfer et al., 2006), increase in prevalence during adolescence (Mayes, Calhoun, Murray, & Zahid, 2011), and are associated with impaired cognitive control in typical development (Eysenck, Derakshan, Santos, & Calvo, 2007; Joorman & Tanovic, 2015).

44 ASD (Age=17.6 (2.9); FSIQ=104.2 (12.7)) and 44 TYP participants (Age=17.2 (3.2); FSIQ=107.6 (11.9)) performed a picture-word Stroop task (Gonthier, Braver, & Bugg, 2016; Figure 1a). Participants were instructed to name the animal pictured while ignoring a superimposed response-congruent (C) or response-incongruent (I) word. Two blocks of the task were performed: a mostly congruent (MC) block, where most of the trials were C, and a mostly incongruent (MI) block, where most of the trials were I. For MC and MI blocks, response time (RT) interference effects were calculated (I RT–C RT). If many I trials are encountered, as in the MI block, participants should adopt a proactive control strategy, whereby they focus more on the picture and ignore the word, resulting in decreased RT interference. Proactive Control Benefit was calculated as a reduction in interference on the MI block in comparison to the MC block (MC_I–C RT) – (MI_I-C RT).

Psychopathology (DSM scales for AD/H, Depression, and Anxiety) was assessed with the parent-report Achenbach System of Empirically Based Assessment (ASEBA) (Achenbach & Rescorla, 2001; 2003).

Proactive control is not impaired in adolescents and young adults with ASD, replicating findings in children. However, anxiety and depression are associated with increased interference in proactive control-demanding contexts, and depression is associated with reduced implementation of proactive control. Thus, while some important underlying mechanisms of cognitive control may be intact in those with ASD, the presence of co-morbid psychopathology can negatively affect cognitive functioning in these individuals, and should be considered when diagnosing and treating their challenges in social, academic, and general adaptive functioning. 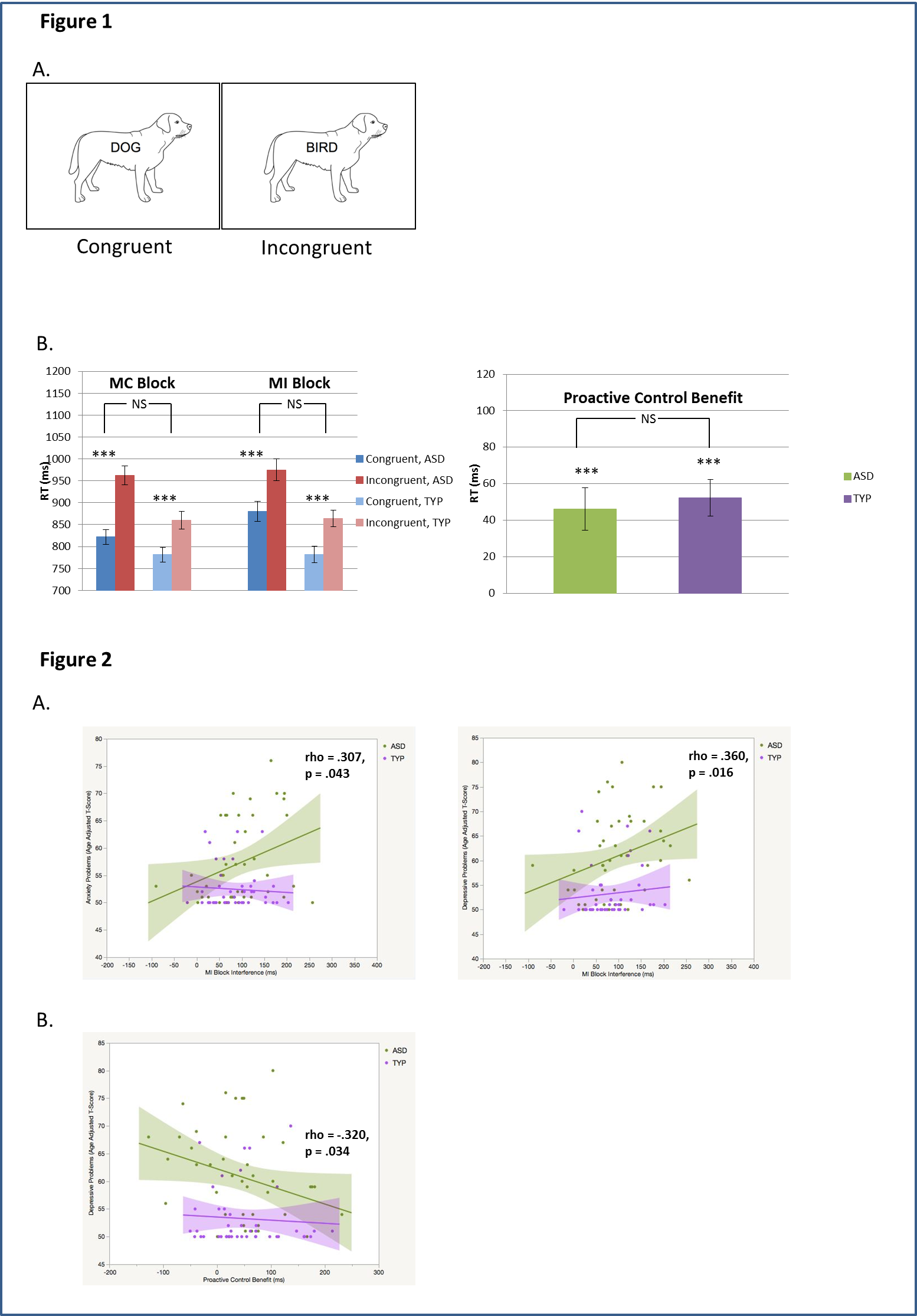